With Bloomsday Near, Remembering The Rosenbach Brothers 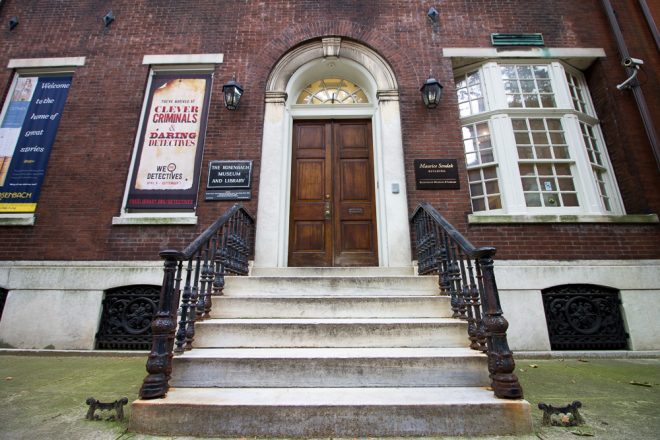 The name Rosenbach has been associated with the 2000 block Delancey Place for nearly a century. The presence of two rare book dealing brothers, Abraham and Phillip Rosenbach, and the museum dedicated to preserving their legacy, The Rosenbach, is never more evident than on June 16th when the block shuts down for the annual Bloomsday celebration. The all-day literary series of outdoor readings commemorates Leopold Bloom’s fictional journey through Dublin as described in James Joyce’s epic novel, Ulysses. The original manuscript of Joyce’s masterpiece is one of the many invaluable printed artifacts within the collection of the rare book museum at 2008-2010 Delancey Place. 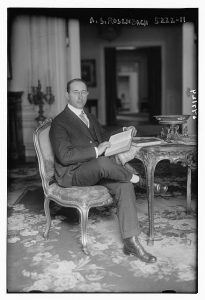 Dr. Abraham Simon Wolf Rosenbach and his older brother Philip first became residents of the block in 1926 when they purchased 2006 Delancey Place. After living there for roughly 20 years, the brothers moved a few doors down into a bigger, grander home at 2010 Delancey Place in 1949. It is inside this house where the Rosenbach Museum & Library was established in 1954.

“We’ve been here longer than any of our neighbors, even those few who have been on the block for decades,” says Derick Dreher, director of The Rosenbach. “So they’ve all moved here knowing full well that we’re on the block 365 days a year, not just Bloomsday.”

Although Bloomsday brings crowds to the quiet, residential street, the neighbors are largely thankful for the museum. “The Rosenbach functions as a kind of daytime concierge,” explains Dreher, “taking in FedEx envelopes and packages for some of our neighbors. Another neighbor has come by every few weeks for years just to make photocopies. In return, the Rosenbach gets to enjoy the benefits of this tightly knit block at night: when the staff is not around to watch the building, the neighbors all are and they do so with great devotion.”

Throughout the Rosenbach brothers’ lifetimes, however, their home at 2010 Delancey remained a private residence whereas the public storefront for the Rosenbach Company, their rare book and antique business, was associated with other Center City addresses.

Of Pancakes and Print – 1320 Walnut Street 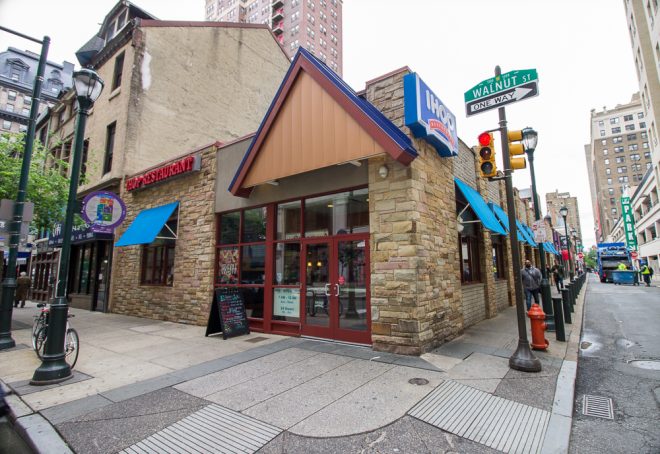 The location of the Rosenbach Company’s former Walnut Street headquarters, now served with a side of silver dollar pancakes. | Photo: Michael Bixler

Between 1903-1943, the Rosenbach Company operated out of the entire building at 1320 (and, as of 1935, also 1322) Walnut Street as internationally renowned purveyors of rare books and antiques. The location is now home to an International House of Pancakes.

The Rosenbach Company was renowned internationally as a rare books dealer. In Philadelphia, however, the company was known for their revolving stock of antique furnishings and assortment of highly-sought inventory ranging from Rembrandt drawings to silver ashtrays. “I think probably every third upper middle class house in Philadelphia by 1950 had something on their wall that had a Rosenbach Company label on the frame,” says Elizabeth Fuller, librarian at the Rosenbach, “because people ask us about them all the time.”

The ground floor entrance hall greeted clientele with tapestries, ornate wooden furnishings, and, a sculpture of Julius Caesar in the center of the room. The first floor had a silver room full of tables of china, glassware, and female busts perched upon pedestals. 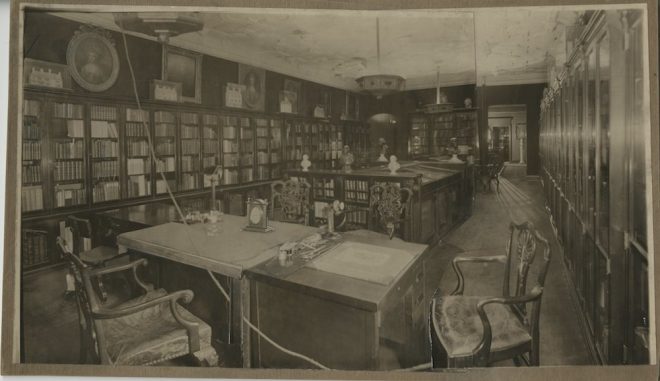 A photograph of the middle of the second floor of the shop shows the ornate plaster work that once decorated the ceilings of the building’s rooms. The second floor also housed a print room and was decorated with framed prints, tables, and chairs.

The book room was furnished with glass bookcases, and papier maché models of Shakespearean buildings that will be familiar to Rosenbach visitors since they are still visible at the museum today. A bookshelf-lined vault was also used to store valuable volumes.

Business was good for the Rosenbach Company during the early 20th century, leading the brothers to lease several auxiliary properties on small streets surrounding the company’s store on Chancellor and Irving Streets to store warehouse supplies, framing materials, and delivery trucks. But A. S. W. and Philip eventually liquidated their antique business in 1942 to strictly deal in books. 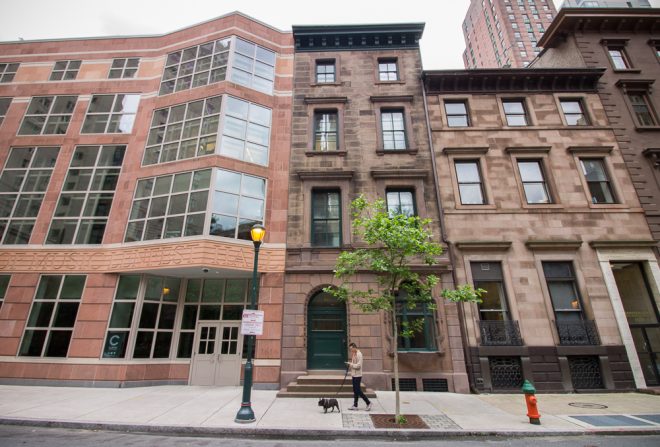 After decades on Walnut Street, the Rosenbach brothers, and their newly-downsized collection, moved to a brownstone closer to their home at 1618 Locust Street. The townhome, bestowed with an illustrious architectural pedigree, was designed by Scottish-born Philadelphia architect John Notman in 1850–around the same time that he designed Saint Mark’s Church across the street. Late 19th century additions, including an ornate ground floor bay window, were designed by Wilson Eyre, an innovator of Shingle style architecture and most recognizable in Philadelphia for his design of the former Corn Exchange National Bank, now a Citizens Bank, at 2nd and Chestnut Streets.

The Rosenbach brownstone was originally commissioned by Henry Carpenter Dallett, who founded the firm of Dallett and Company with his brother, John, in the 1830s and operated the first regular ship line running between Philadelphia and Venezuelan ports associated with the coffee trade.

The townhouse was later owned by Charles Custis Harrison, a trustee and provost of the University of Pennsylvania as well as president of the Franklin Sugar Refining Company in Philadelphia. It was Harrison who commissioned Eyre to make alterations to the building in 1888. 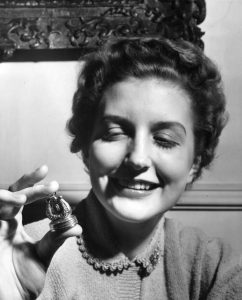 The Rosenbach Company operated out of 1618 Locust for the last decade of both the business and the two brothers’ lifetimes, between roughly 1943 and 1953. The two childless brothers died a year apart from each other in 1952 and 1953.

“Before their deaths they created a foundation to which they made some gifts to start,” explains Fuller, “and then they bequeathed basically everything–their company assets, their personal collections, their house. And that’s what became, eventually, The Rosenbach.”

Through later renovations, the building at 1618 Locust was combined with the clubhouse of the adjacent Locust Club of Philadelphia, a Jewish social club commonly known as the “Jewish Union League”, where A. S. W. and Philip Rosenbach were once members. The Locust Club was on the site of what is now the Curtis Institute of Music’s Lenfest Hall.

By the time VSBA Architects & Planners began designing Lenfest Hall and evaluating how best to incorporate 1618 Locust into the structure, the majority of the third floor on Locust Street had been removed to install a squash court, says Daniel McCoubrey, president and principal of VSBA. “However, the stair to the 4th floor and the 4th floor rooms existed in a decayed state, not unlike the house in Great Expectations,” recalls Daniel McCoubrey, president and principal of VSBA. All but the historic façade of 1618 Locust was demolished to build Lenfest Hall, due to the difficulty of incorporating the interiors into the new building.

The new ground floor of the Rosenbach Company’s old headquarters now features the offices of the Curtis Institute’s registrar. The second floor houses a harp studio, and the 3rd and 4th floors are music instruction studios.