With A Little Help From Frank Furness, We Evaluate 10 New Projects

Author’s Note: When it came time to decide on a new system for rating new buildings, we looked to the father of unique Philadelphia architecture for guidance, Frank Furness. And when we did, we couldn’t get past his jowls. Furness was a hipster in his day. One needed big jowls to do his kind of eclectic architecture. We honor his bravery and creativity by applying his jowls here in jocular form. The more jowls, the better the architecture.

Museum of the American Revolution 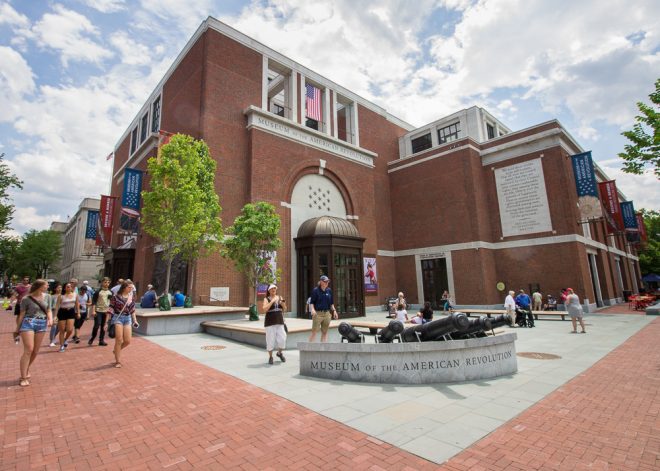 If I were living in 1784 I’d tip my tricorner hat to this edifice. But I am not. And neither are you. The American Revolution was a groundbreaking event that ignited self-government in the world. Stern designed a museum that looks like the British won. At least Prince Charles would like it. 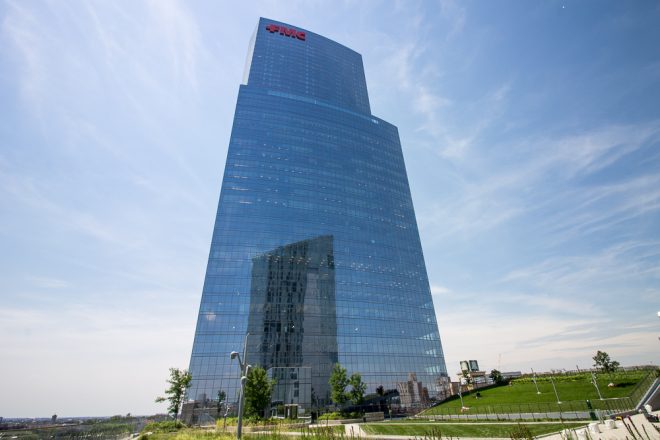 The building is (F)airily (M)ediocre (C)onsidering its site. Visible from nearly every point in the city, the sequel to the original Cira Center is what most sequels are: more of the same, but less inspiring. Nestled next to train tracks, I-76, and the elevated Walnut Street, Cira Centre South’s entry level has a view to all of that activity. It’s a shame that the building’s dynamism at the ground level couldn’t make its way up. At the top is FMC’s red logo, as poorly proportioned as the IBX logo on the wretched tower at 1901 Market Street.

Perhaps the best use of this multi-use building is shadow caster. Though it blocks the southern view of the more attractive Cira South tower, Evo Philly building, it redeems itself by providing much needed shade to the adjacent elevated park, Cira Green. 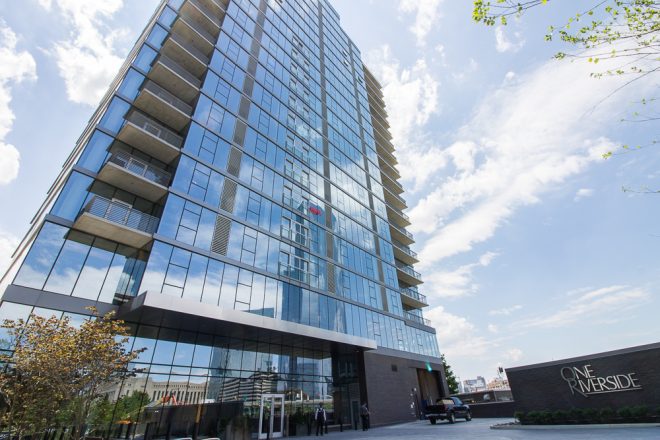 It could have been worse. Given the zoning error of the parcel and developer Dranoff’s penchant for faux historic enclosures, Cecil Baker rescued the project. He did this with surprising restraint: limiting the materials to metal panels, painted concrete, and blue glass (!) and slimming down the massing. That mix should hopefully protect the southern Schuylkill Park gardens from the blazing summer sun. It’s a shame that the air rights over the garden weren’t purchased to make that south-facing facade more compelling. It’s a largely blank wall that, with a vertical garden, would provide visual pleasure and a cooling effect as well. And if balconies extended on that south side, the project might have furthered human interaction.

Developer myopia affects the ground level, which is surprising given Dranoff’s near three-decade knowledge of the area. That bit of landscaping on the north side is a waste. A two-story retail space overlooking the spectacle of the trains and trail would have made a great gateway to and asset for the neighborhood. Where can one get their avocado toast, late night soy milk, and pup cakes around there? 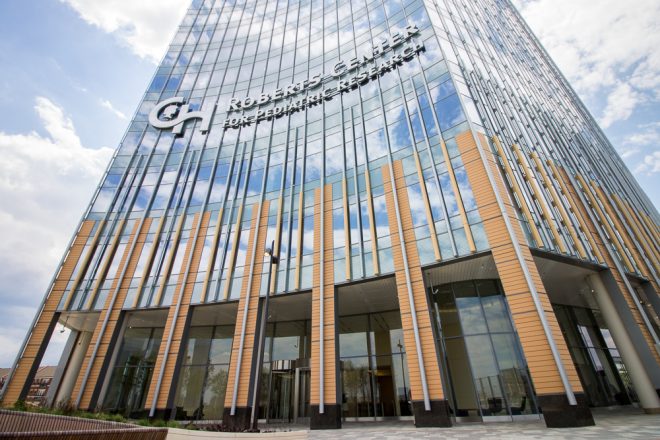 Set back from South Street bridge via a maze of semi-public seating and planters, the Roberts Center for Pediatric Research is finely detailed with a terra cotta rainscreen, metal fins, and blue glass (!). With curved facades offering panoramic views, the form of the building is as if it were drawn by the path of the sun. Those views are available thanks to its unique site on the east side of the Schuylkill River. The related Schuylkill River Trail is accessible on the south side via an off the shelf pedestrian bridge and an over-scaled concrete stair. Its no-frills aesthetic is a physical manifestation of CHOP’s minimal concession to the neighborhood. At least the ample landscape buffer zones are attractive. Given its location tucked along the east side of the building, the limited retail activity gives off the feeling that it is for CHOP researchers only. But access to the site is the main problem. Vehicular traffic on the inadequate South Street bridge is already challenging and the unattractive garage entrance compounds the issue severely. It may be time to cut off the I-76 ramp access and rethink another way in and out of the city. 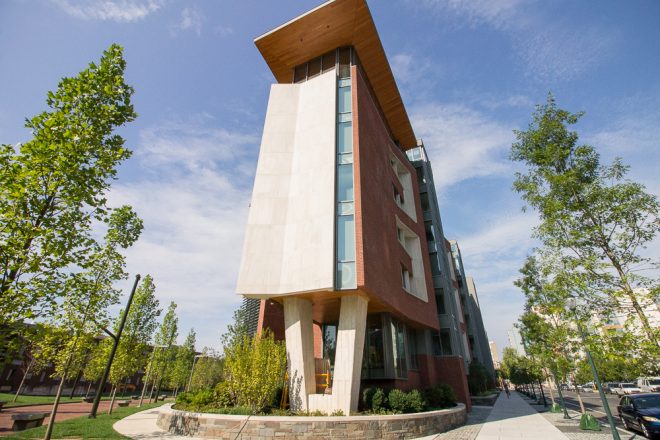 But it is massing and detailing that sets this building apart. The stretch of the Chestnut Street facade is carefully articulated with subtle angular changes and pronounced vertical breaks. The Breueresque corner at 33rd and Chestnut suspends a large sculptural limestone panel and serves as an abstract east-facing university gateway.

While the building lacks any commercial activity, student lounges and internal courtyard are alive with student life. Details to delight the eye and surprising views abound. A sloped terrain rises within the courtyard giving students a place for leisure and winter sledding. Let the games begin!

The Alexander AKA Mormon Tower 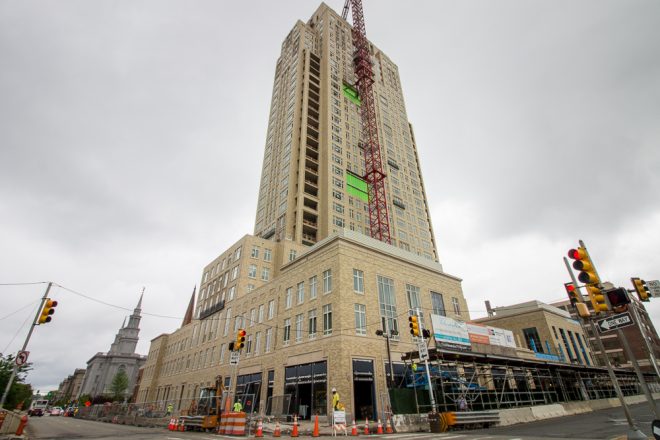 Philadelphia Apartment Tower, serves 32 floors
Ingredients:
Historic context that fits your modus operandi
1 large underutilized site with prominence
1 architect that has done this before. Use similar typology (10 Rittenhouse Square)
1 architect of record. Use similar typology (Symphony House)
Mix them together to a saccharine taste
Monitor construction like you would a souffle
Add PG-rated ground floor retail
Build to last for the Second Coming 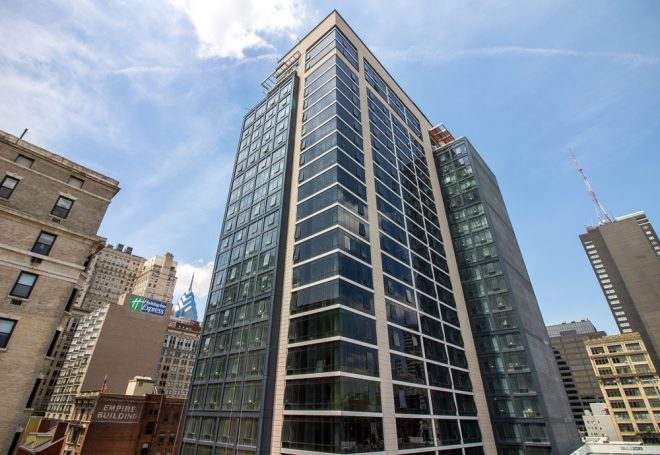 The Summit at University City 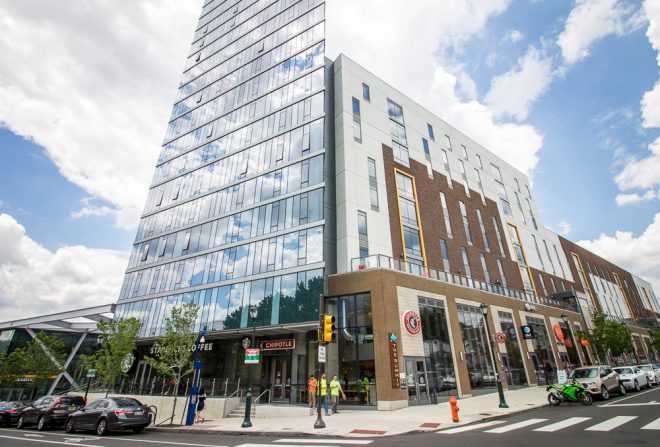 The strange case of The Summit begins at the corner of 34th and Filbert Streets. Here, a two-and-one-half story crystalline form sits behind a dynamic steel skeleton. Behind it rises a southeast facing, 25 story wall of varied blue glass (!). To the south, the glass merges with a grid of cream-colored panels. To the east, the glass facade allows for an extraordinary view of Center City, a view that will be radically different in 20 years.

Back at ground level, baking hot, dark granite steps rise to an entry podium for the apartment house primarily serving Drexel students. Then, turning the corner and facing north is a lower scaled wall of retail and some housing. This facade meets the existing neighborhood with two colors of brick, beige pre-cast panels and bile yellow accent-framed openings. Looming always beyond is the blue-glazed apartment tower whose west facade is a broken, glass spine within a pre-cast concrete matrix. Is it corporate flair or local pastiche? One never knows which face you will face at the Summit…. Muwahahahaha! 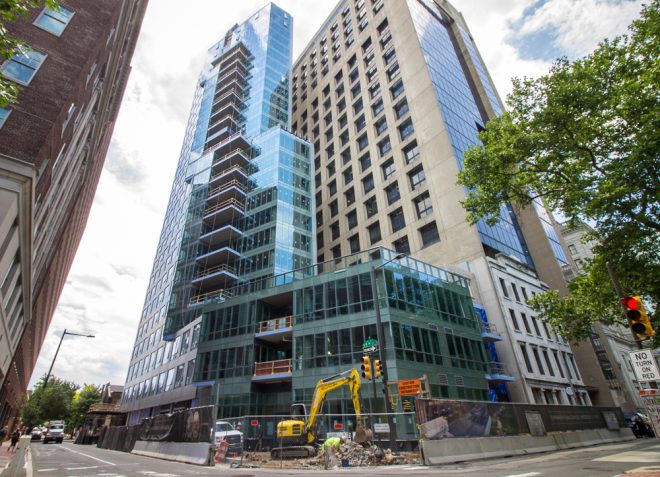 Sidling up against the east side of Mitchell | Giurgola Architect’s remarkable Penn Mutual building on a narrow lot, 500 Walnut could possibly have the best site for a residence in the city. To the north is Independence Hall, which 500 Walnut’s tower angles toward. To the east is the Delaware River, which is visible after rising 12 floors. That’s prime firework viewing from the sleek terraces. And Philadelphia has firework displays like New Orleans has parades.

500 Walnut borrows from the punched opening grids of its neighbors and then steps that aesthetic back for a curtain wall of blue glass (!) rising 27 floors in total. The tower itself is recessed from Walnut Street, lending light and views back to Penn Mutual and keeping its form secreted from the watery eyes of American tourists visiting the Liberty Bell. 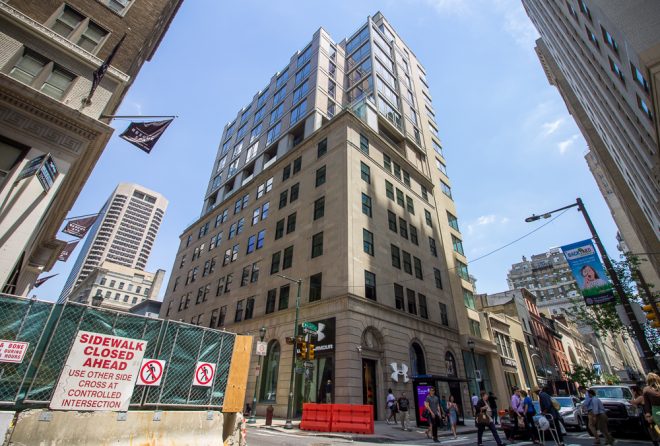 I have a secret to tell you: there is a 14-story building at the northeast corner of 16th and Walnut. It’s a secret because you’d have no idea standing there unless you step into the street. The original Brown Brothers Harriman building, a six story Renaissance style affair completed 90 years ago, serves as the formal base to the rising new addition.

That addition has a Modernist touch as it rises along the east side of the original building and then gulps up the air rights to the west. Its patterned, two-tone, buff-colored brick contextually riffs on the original edifice’s limestone facades. A carefully recessed zipper of glass demarcates the two structures, while mitred windows declare the addition’s Modernist stance. A terrace for all residents resides where the addition meets the existing 1927 roof. It is a natural choice, but rarely executed well. This property is living up to its full potential and makes one wonder why the rest of Center City does not follow suit.