The National? It’s About To Reappear 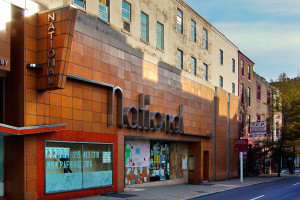 For over a year, as ownership changed, the site of the former National Restaurant Supply Company, on 2nd Street in Old City, has been vacant and producing anxiety among urban observers that the company’s iconic building, with its steel frame and orange tile, would never be rebuilt. The historic building was demolished last February, as Hidden City’s Brad Maule reported, under agreement with the Philadelphia Historical Commission to rebuild the façade. But since then the site has mostly sat empty.

Now, with workers laying the foundation, the old National will rise, if only a semblance of its original self, as part of a 192-unit mixed-use apartment building, “The National,” being developed by the Buccini/Pollin Group, a real estate firm with offices in Conshohocken, Wilmington, Baltimore, and Washington. The National is the firm’s first project in Philadelphia. Impressively, the new building, at six stories, will contain 2,000 square feet of retail space, along with a roof terrace, pet spa, and clubhouse. Barton Partners, an architecture firm with offices in Norristown and Philadelphia, is responsible for the design, which according to renderings, carries through the orange tile color.

A groundbreaking ceremony will take place tomorrow, June 9, at 10AM.