A Rusty Nail On Lancaster Avenue Reveals All 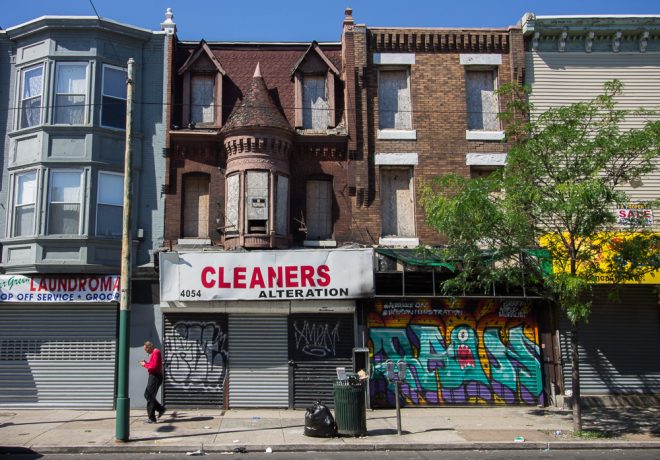 Lancaster Avenue is slowly waking up with a fascinating building stock to match its renewed energy. Once a lively, main thoroughfare between the city and suburban points northwest, the completion of the Schuylkill Expressway, between 1951 and 1960, contributed to a crippling decline in business along the avenue. The corridor has maintained a certain level of neighborhood vitality, but, with the growing influence of Drexel University in Poweltown Village, and a recent uptick in real estate speculation in neighboring Mantua, a rise in vibrant, commercial activity is beginning to speckle Lancaster Avenue like ice cream jimmies. Ripe for reuse along the corridor are unique spots like this mysterious Victorian row house and birthplace of Gartside’s Iron Rust Soap at 4054 Lancaster Avenue.

The unique property was built some time in the 1890s. The architect is unknown. Even in its current forlorn state, the building’s façade is still striking. A slim, pitched roof covers the 3rd floor, while the second level is clad in patterned brick. Most prominent is a round bay window that stands out like a conical tower. The earliest known occupant of the property was Madge A. Kelly, who imported and distributed millinery and straw goods here between 1896 and 1900. Mary A. Gallagher, a University of Pennsylvania student and, later, professor, lived on the upper floors during the first decade of the 1900s. 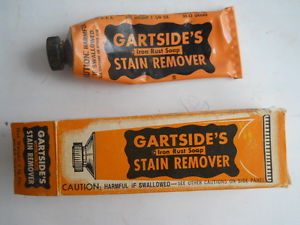 In 1914, Joseph Gartside bought the house and altered it for the production and distribution of his famous stain removal product, Gartside’s Iron Rust Soap. Gartside was the youngest son of a prominent, iron-working family in Chester, PA.  In 1894, Gartside, an amateur chemist, discovered a formula that was capable of removing rust, ink, fruit, and medicine stains from clothing and marble. He first produced the soap in his house at 719 North 40th Street (now demolished), selling small tubes of his concoction door-to-door for 25 cents each.

The product quickly became popular. Only a small dab of the substance was required to remove stains from cloth. Gartside’s Iron Rust Soap Company was officially incorporated in 1896. By 1910, other manufacturers were imitating Gartside’s stain remover, but only one, Call Again Iron Rust and Ink Remover, ended up being viable competition. In a bold move, Call Again packaged their version of the soapy goo identical to Gartside’s, even including the same type of rubber band around the tube.

Gartside sued the company and several others, but was unable to legally prove infringement. To make matters worse, he never trademarked his product. After losing in court, Gartside started a smear campaign, placing ads in publications around the country to mock and insult his copy cat competition. In 1917, the Federal Trade Commission investigated Gartside and ordered him to cease and desist his public derision.

After Garside’s death, the company was willed to his son, Harry, and his sister, Katherine Gartside Emmert, who appears to have taken over as head of the company. Katherine, an accomplished woman in her own right, was one of the founders of the Philadelphia Chapter of the Professional Women’s Club, a social and professional organization for business women. The club operated out of 4054 Lancaster Avenue until the mid-1920s.

Gartside’s Rust Soap continued to be a successful product, and the company moved out of 4054 Lancaster Avenue in 1928 to several other locations over the next few decades. At its peak, the company even had its own store at 50 North 8th Street. Gartside’s Iron Rust Soap finally folded in the early 1980s. Joseph Gartside’s grand nephew, Gar Emmert, was the company’s final owner. 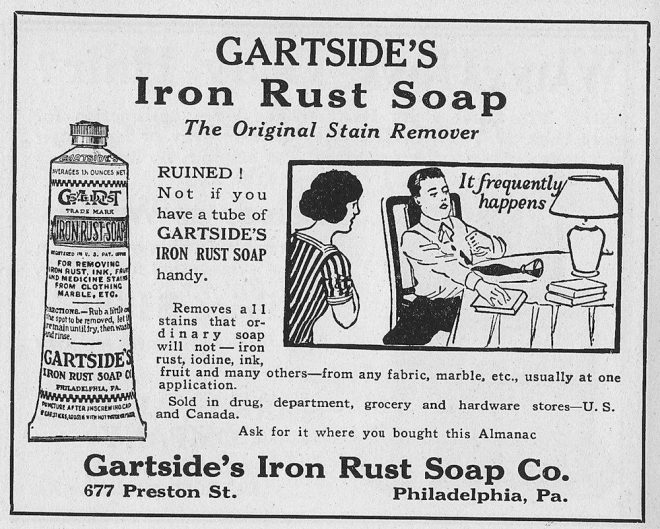 By the 1970s, the building was being used for a jewelry store. Sun Byung Moon bought the place for $18,000 in 1976, yet it sat vacant for quite some time thereafter. In 1988, Moon combined the storefront with the building next door and opened Mooney’s Menswear. In 2002, 4054 Lancaster Avenue, now separated again, was leased to a hair salon followed by Sugar N Spice Video, an adult video store. While the upper floors have remained empty for decades, the ground floor was last occupied by a laundry service. The current owner purchased the property earlier this year.