Behind The Bar At Dirty Frank’s 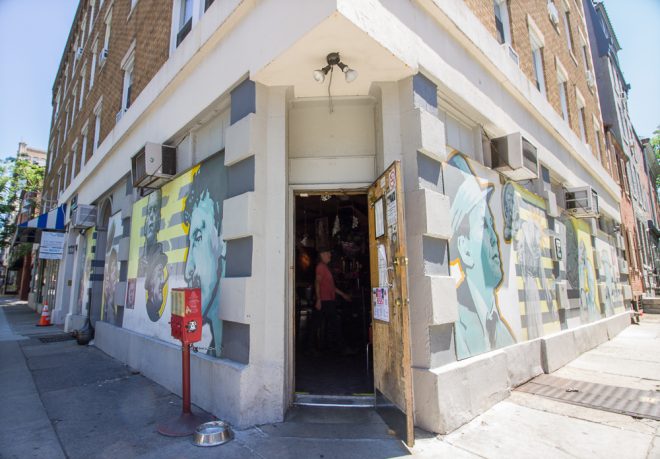 Dirty Frank’s at 13th and Pine has kept Philadelphia boozed up and blotto for 84 years. | Photo: Michael Bixler

Not too long ago Center City was filled to the brim with local neighborhood bars that served libations on the cheap. Folks of all backgrounds and incomes came together in these so called “dive bars” to get drunk in boozy solidarity. Only a small handful of beloved, bygone watering holes remain, including Dirty Frank’s, a neighborhood institution for over 80 years.

The northeast corner of 13th and Pine was inhabited by a series of row houses for years until a real estate speculator began assembling the properties in the first two decades of the 20th century. As early as 1914, the group of corner properties were put on the market as a development site. It wasn’t until 1927 that the existing building stock was cleared and construction was completed on a 12,352 square foot building with 18 apartments and five retail spaces. The building, now called Pineview Apartments, has a sedate beauty with a few interesting facade details, namely an arcade of small arches hanging from the roofline as a cornice. It was dubbed “The Pinehurst” when the building first opened. Samuel Miller’s tailoring business was the first tenant to open shop there. 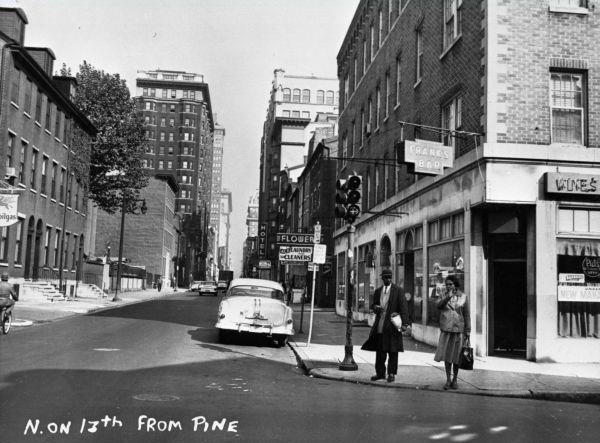 Dirty Frank’s, and the Pine Crest Apartments, in 1959. | Image courtesy of PhillyHistory.org

Who exactly opened the bar on November 8, 1933 is a little unclear. According to Dirty Frank’s, it was a fellow named Louis Silverman. There were several people with the same name in Philadelphia at the time–a retired boxer, a laundromat mogul, a dental supplies distributor with an office a few blocks away, and a cigar stand owner. There is even a well known state representative by that name. However, after some sleuthing, we have come to determine that Louis Silverman, the cigar stand owner, must have opened the bar. In 1925, he moved into The Pinehurst to live and open a store inside the 347 South 13th Street retail space. Not only was he selling cigars, but providing legal services as the neighborhood notary.

Then comes the proverbial million dollar question: if Louis Silverman founded Dirty Frank’s, why would he name it that? Frank, we know, is Frank Vigderman, the second owner of the bar. There aren’t many details available about Frank, other than he was an immigrant from the Ukraine and once owned a silk dress company located in a building that still stands at 906 Arch Street. Legend has it that he always wore the same clothes and had bad hygiene, giving Dirty Frank’s its legendary name. Perhaps Louis Silverman sublet the space to Frank, who himself founded the bar. Silverman was still doing notary work at 347 South 13th into the 1940s. And despite what the Dirty Frank’s website says, the expansion of the bar into the 339 South 13th Street space occurred some time between 1956 and 1959. 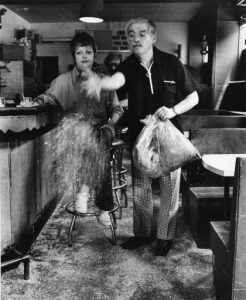 In addition to Dirty Frank’s, another long term tenant, Joseph Kury Booksellers, opened up in the two storefronts at 341 and 343 South 13th Street in the 1950s and remained in business until the 1980s.

1959 was a big year for The Pinehurst. The building was purchased by Conrad J. Linke and was renamed Pine Crest Apartments. It was also the year that Israel “John” Segal took over Dirty Frank’s. He renamed it 347 Bar in 1962, the bar’s official name into the late 1970s, but hardly anyone called it that.

Linke, owner of the building from 1959-70, was one of many prominent artists that moved to Washington Square West in the late 50s and early 60s. The housing was cheap, the proximity to the art clubs on Camac Street was close, and the nearby Philadelphia Museum School of Art (now UArts) all attracted a community of artists that still exists today. Linke was a local illustrator, best known for his famous 1923 Atlantic City Beauty Pageant poster that still sells prints today. Linke lived on Clinton Street and had an commercial art business on the 1100 block of Spruce Street until moving to New Jersey in 1962.

In the 1970s, the building was bought by the Arlem Corporation, the real estate wing of S.S. Guzzardi’s consulting engineering firm. By this time, Dirty Frank’s reputation was beginning to spread outside of the city. The Fodor’s Travel Guide from the era recommends it as an attraction for its diversity of clientele. Newspapers in Pennsylvania and New Jersey spoke of its game nights and quirky atmosphere. Beginning in 1979, the bar’s new owner, Jay McConnell, began displaying the work of local artists, a tradition called the “Off the Wall Gallery” that is still going strong today. 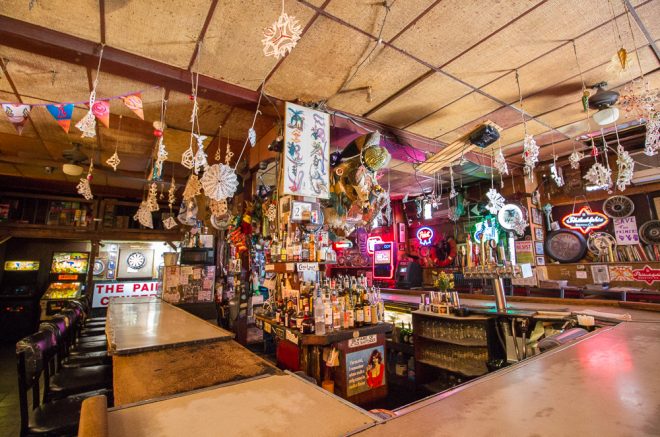 In 1981, Stanford Hoffman purchased the building. In the mid-1980s, Joseph Kury booksellers moved out and in moved Neat Stuff, a fun, antique toy and gift shop that is still in business 30 years later. The 339 South 13th Street retail space at Panana Street was then occupied by the Washington Square West Project Area Committee. In 1988, the windows of Dirty Frank’s were completely covered and stuccoed over, giving the bar a dark, dank atmosphere on the inside and a nondescript, no frills exterior.

The neighborhood saw significant reinvestment during the 1990s, but Dirty Frank’s stayed the same. In 2001, the Mural Arts Program commissioned artist David McShane to create the Famous Franks mural that still adorns the bar. The mural was recently restored and updated to include, among others, Pope Francis. Dirty Frank’s new owners, Brad Pierce and Jody Sweitzer, took over the bar in 2014.