An Artful Adaptation In Bella Vista

Pageant Soloveev, the contemporary art gallery at 607 Bainbridge Street, closed its doors for renovation in March 2016. Since then, owner and artist Daniel Dalseth has been hard at work remodeling not only the 1,500 square foot gallery but also the 3,000 square foot residence upstairs. The result, while still in development, is revealing itself to be a striking display–a large, modern, structure emerging out of the side of an early 20th century commercial building. The project stands apart from the metal-cladded boxes being erected en masse from Fishtown to Point Breeze that have, as of late, served to define new row house construction in Philadelphia. 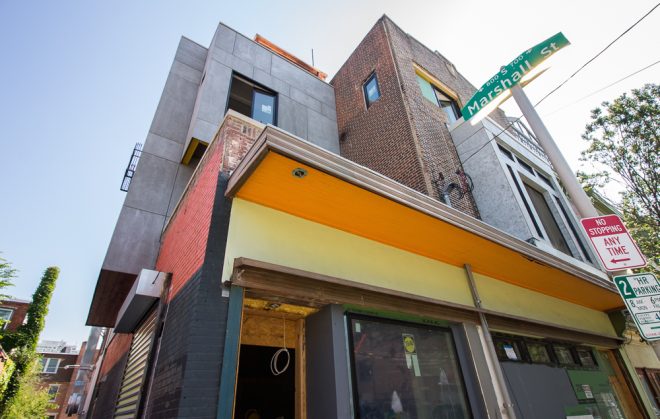 Adaptation and additions to an old furniture at Bainbridge and Marshall Streets shows South Philly how to renovate with creativity. | Photo: Michael Bixler

607 Bainbridge is distinct in its eclectic use of materials which cohere in a tasteful simplicity. But perhaps equally important is the project’s attention to sustainability across myriad aspects of its design. The project is the result of a collaborative effort between Dalseth and designer-builder Jeffrey McMahon, whose Brooklyn-based firm Jeffrey McMahon Design+Build is managing the construction.

As a sculptor, Dalseth takes things he already has on hand and alters them as opposed to creating something new out of raw material. This idea of reshaping an existing world to fit an idea is a driving force behind the renovation project.

Born and raised in Minnesota, Dalseth received his MFA from the University of Pennsylvania in 2002. “It was obvious upon finishing graduate school that the prevailing conditions of the ‘art world’ and the machinations of creating and exhibiting work within that system, as an artist whose primary interest is unfettered creative expression, was an untenable situation,” said Dasleth. “Thus Pageant Soloveev came into being.”

Since he acquired the former furniture store in 2004 to become his home and gallery, Dalseth hadn’t pursued renovations. But the collaboration with McMahon, who trained in painting at Temple University’s Tyler School of Art and the Art Institute of Chicago, has resulted in a total reworking of the 1928 building. 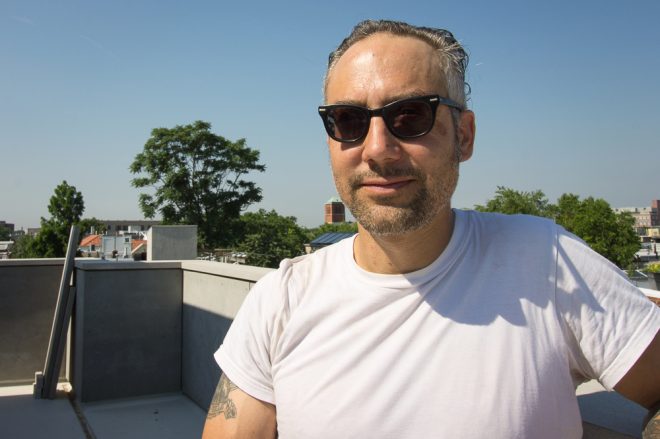 “I wanted to make something that I didn’t think was a piece of shit,” he continued.

Jeffrey McMahon’s interest in building and contracting began when he was 15 years old. He worked in his West Philadelphia neighborhood, doing painting, carpentry, and roofing. After graduation from the Art Institute, McMahon taught color theory and design at various colleges. Then, in 2002, he got involved in renovating a Washington Square townhouse. This three-year project allowed him to re-enter the architectural world while maintaining a career in the arts.

McMahon’s work can be characterized by his focus on sustainability, specifically his use of passive house construction techniques and reclaimed material. Sustainable construction, as it relates to the Pageant project, is primarily concerned with energy reduction as well as reclaiming, repurposing, and reusing materials.

Concerning energy reduction tactics, McMahon was most emphatic about installing a heat pump hot water system, which uses air temperature to offset the amount of energy it takes to adjust the temperature of the water. Such as a system costs almost four times as much as a regular water heater but will pay for itself in its reduction of energy costs in just three years. This particular system, according to McMahon, is warrantied for at least 15 years. 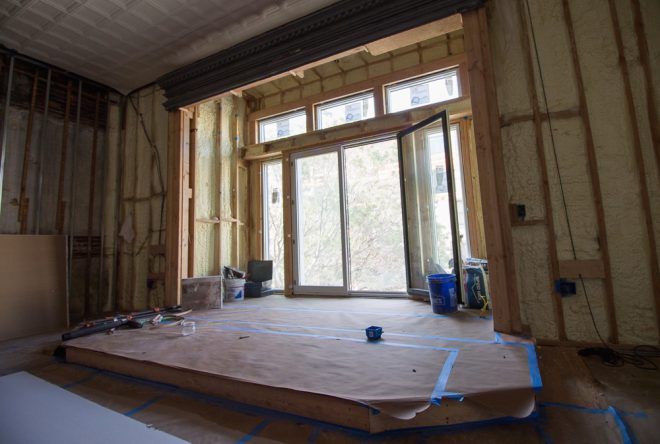 Dalseth and McMahon plan to take the old bay window that was removed for modern fenestration and use it to frame this second acoustic performance stage on the upper floor of the gallery. | Photo: Michael Bixler

Reclaiming, repurposing, reusing has to do with using material already available on-hand, either as part of the existing structure or salvaged from a nearby demolition site. If a room contains an old, hardwood floor, the team re-sands it, bring it back to its original beauty as opposed to tearing it up and installing new material. Every time Dalseth and McMahon use existing material in their renovation, it aids in energy reduction.

In terms of more elaborate recycling, some of the wood they are using is a reclaimed heart pine, which they milled from old beams. The beam structure that makes up the staircase is all reclaimed.

“Three to four months ago a building was being taken down two blocks away and we went on a frenzy of harvesting what they were getting rid of,” said McMahon. “A lot of our reclaimed beams, such as the ones used for the staircase, came from this building.”

“We also got 600 square feet of tin,” added Dalseth, going on to describe their relationship with the demo site as “a kind of symbiosis.” 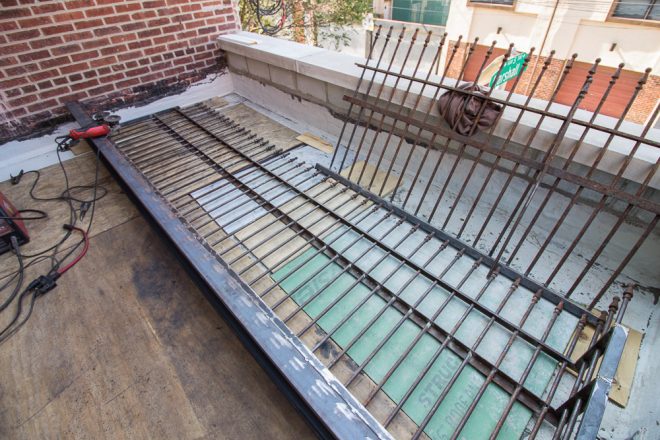 Dalseth is recycling old iron railing and transforming it by hand into exterior balconies and a staircase. | Photo: Michael Bixler

Dalseth and McMahon have also salvaged 300 linear feet worth of reclaimed antique railing which they plan on taking apart and stripping down, getting all the old rust and paint off. Then they’ll weld and fabricate it for use on the exterior balconies and the central interior staircase.

Other sustainable efforts include a solar-electric array going in on the roof and a stormwater recapturing system on the pilot house. Dalseth also maintains a garden and beehive.

“I renovate buildings and build new structures. There’s a sense of responsibility that comes with that,” said McMahon reflecting on his design ethos. “Sustainable practices yield healthier homes, homes that have cleaner air quality on the interior because of less volatile organic compounds such as formaldehyde.”

“We plan to cast concrete tiles out of the old tin and do the entire front facade on the first floor with that and we’re going to have a green area of plantings in front of that,” said McMahon, referring to the inside-out theme. 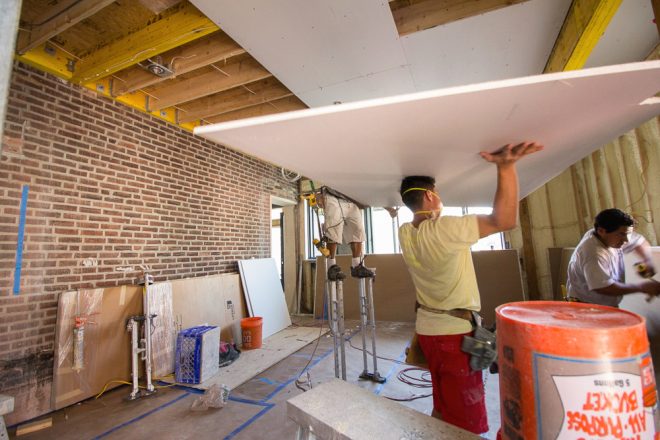 On the upper levels, the facade features in-swing windows and doors which lead out to balconettes which McMahon believes creates a connection to the street below, an idea he says comes from 19th century Parisian design.

All of the work is concerned with aesthetic themes, structures, and functionality and how these ideas relate to the livability of the residence, to the commercial space on the first floor, and to Dalseth’s life as a gallery owner, father, and artist.

“In December, when we finally got our full permits, I said to Jeffrey, ‘I need to be here every day.’ I was never comfortable with the idea of having someone else build my house [especially since] I can build things,” said Dalseth.

“For the first time in my life as a designer-builder, I have a client who has an equal creative investment in what he wants his space to be and the ability to express that and work cooperatively. Daniel is on site seven days a week,” said McMahon. “He participates in the larger crew, with the subcontractors and the site manager. All of our cooperative work is as a design duo.”