Summoning The Spirit Of A Victorian Masterpiece

At 22nd and Walnut, the legacy of the Saint James Protestant Episcopal Church is honored by two murals that surround a Sunoco gas station. One mural features a silhouette of the church that was demolished in haste years ago, while another renders the ghostly visage of the building in a trompe l’oeil reflection. These bittersweet murals are all that remains of a congregation that was once one of the largest and most prominent in the region. The church’s wonderful support building, the Henry J. Morton Guild House, is lost to time and memory as well. Designed by Wilson Brothers & Company, masters of Victorian architecture and railroad infrastructure, the building that once graced the 2200 block of Sansom Street is now a school employee parking lot. 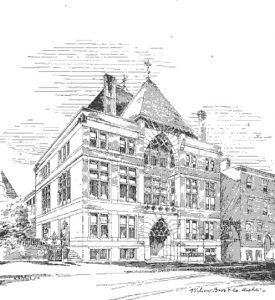 Saint James Protestant Episcopal Church was consecrated in 1809, a mission of Christ Church Philadelphia. In 1830, Henry J. Morton became assistant minister. He would go on to take the helm of the parish as the elected rector. Under his leadership, the congregation grew large enough to require the construction of a new and modern church at the northwest corner of 22nd and Walnut in 1871. Here, it became the locus of social and religious activity for wealthy elites that were beginning to populate the neighborhood surrounding Rittenhouse Square. Demand for seating led to the leasing of pews to prominent families nearby, sometimes for as high as $2,000 a year. The parish was so popular that one member, George W. Childs, even built his mansion catercorner to the church.

As the church gained prominence and the coffers overflowed, programming was expanded to include educational and recreational organizations. The St. James Guild for Boys, Guild for Girls, a Workingmen’s Club, Hospital Aid Association, Sewing School, and several other organizations all used the church building for their headquarters.

Eventually, a new annex building was needed, and a lot connected to the church, at 2210 Sansom, was acquired. The property was part of the estate of Lemuel Coffin, a wealthy merchant who also developed the row houses that still stand along the 2200 block of Walnut Street. The new Saint James Guild House was designed by Wilson Brothers & Company, the prominent Philadelphia architectural and engineering firm that designed Reading Terminal Station, Drexel’s Main Building, and other local Victorian landmarks.

In 1889, construction on the new Guild House broke ground. An 80-year-old Henry Morton was on hand to set the cornerstone for the building. After his death later that year, the church annex was named in his honor. It took three years for the Guild House to be completed. It opened on October 1, 1892.

The Guild House was designed to impress. Two large, arched openings stacked on top of one another greeted visitors as they entered. The façade was laced with multi-colored geometric details, and the building was covered with two pitched roofs. The basement held a gymnasium and locker rooms, while the first floor had recreational areas for teens and classrooms for educational programming. The second floor featured a large hall that was used by the Workingmen’s Club. On the third floor was the church library and offices for the vestrymen and assistant ministers. 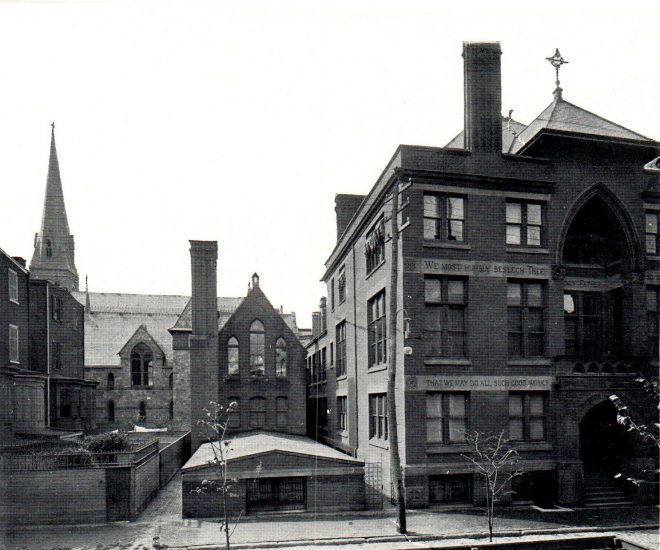 While the Guild House supported many church programs, the primary focus was the St. James Guild for Boys. Delinquent teenage boys were a problem in late 19th century Philadelphia. While some youth outreach organizations and institutions attacked the problem by either rote learning or recreational activities, the St. James Guild for Boys offered both and everything else in between. There were classes in stenography, writing, reading, and arithmetic, but the school’s main focus was its “manual training” classes in wood carving, ceramics, and drawing, taught to “elevate boys morally, physically, and mentally”. A 1897 report from the school’s 9th year claimed that it has turned “little street urchins” into designers and workers in the industrial arts.

In addition to the church’s many programs, the large hall inside was used by a large array of local clubs and organizations. Saint James grew even more prominent during this period. Wealthy members of the parish funded large memorials and additions to the church building, most notably its tower, which became an instant landmark when it was installed in 1903.

Views of the Saint James Protestant Episcopal Church in 1933. The church and some of the buildings in the rightmost photograph were demolished in the 1940s. | Images: PhillyHistory.org

By the 1920s, membership at St. James dwindled as congregants migrated to the suburbs. The church made several attempts to keep operating, including an effort to merge with another church, become the city’s Episcopal Cathedral, and refocus their Episcopalian philosophies to align with new neighborhood residents.

In 1940, the Henry Morton Guild House was in bad shape, and its stewards were not in a financial position to upgrade and restore the building. The church was closed in 1945 and razed in 1946. An Atlantic Richfield gas station was built in its place.

The Guild House property at 2210 Sansom was demolished in 1940/41. On April 25th, 1968, the lot was acquired by the School District of Philadelphia for use as staff parking for the Albert Greenfield School.

Special thanks to Mike Krasulski for providing additional research for this article.