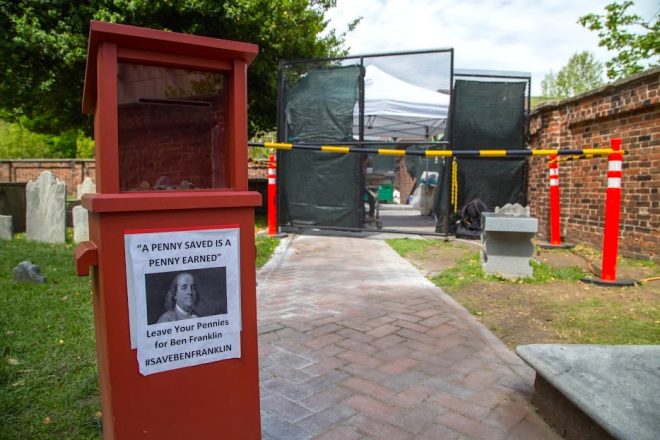 Benjamin Franklin’s grave stone is currently undergoing repairs. Visitors can sneak a peek at the restoration process through partitions during the weekday. Just don’t throw any pennies. | Photo: Tyler Horst

For the past few weeks the opening in the brick wall surrounding Christ Church Burial Ground has been closed off with tarp. The main attraction sitting behind it—Benjamin Franklin’s grave—is currently undergoing careful restoration to rescue Franklin’s tombstone from a heavily damaged state.

“Most people probably won’t even notice we did anything,” says Marco Federico, the architectural conservator for Materials Conservation who has been leading the project.

The famous crack that snakes right down the middle of the founding father’s grave marker will still be visible upon its official unveiling on May 23, but the fissure will have been filled on the inside to prevent further deterioration. Federico says the idea is not to give the stone a facelift, but rather to restore it safely to its original, humble character.

“For a long time, people wanted to do a big restoration of the old marker. They basically wanted to toss the old stone and put in some glorious, grandiose monument, which [Franklin] never wanted,” Federico explains. “His will is very specific.”

The simple stone has long been a source of Philadelphia pride, but the city’s ways of loving it has tended to do more harm than good. In the 1850’s, Franklin’s family requested that Christ Church open a section of the brick wall around the burial ground and put in a fence so that passersby could see Benjamin Franklin’s grave (or so the story goes). Soon after, the tradition of tossing pennies on to the grave marker began. 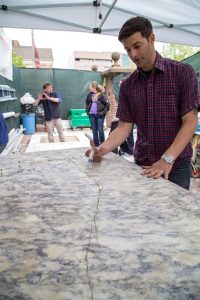 Marco Federico, the architectural conservator for Materials Conservation that is leading the restoration project, says that the crack in the headstone gives it character and will remain. The damage will be stabilized to ensure durability. | Photo: Tyler Horst

There are many different rumors about the origins of the practice. Lauren Krupinski, a tour guide at Christ Church, says it began with brides asking Franklin’s blessing of their marriages. The pennies are thought to come from Franklin’s maxim: “A penny saved is a penny earned.”

Quaint tales aside, copper projectiles haven’t helped the structural integrity of the historic stone. While Federico says it wasn’t the cause of the crack, each penny tossed threatens to open it further and leaves pitting and small fracturing all over the stone’s face.

John Hopkins, the burial ground coordinator for Christ Church, says church staff have been coordinating with city tour guides to dissuade the continuation of the penny tossing once the grave marker is back in public view.

“It’s a tradition, it’s hard to change, but we can try to alter the culture of it,” Hopkins says.

Just as he finishes speaking, as if to underscore his point, several pennies come sailing over the tarp, which bears an explicit warning sign about the restoration work being done behind it.

“To me, it’s really disrespectful,” says Hopkins after shielding himself from the volley of pennies. “The biggest part of it is these groups come by, they tell them to throw the pennies, and they walk on. They don’t talk about the most important American to ever live.”

The biggest threat to Franklin’s modest monument is the long fracture. Around the time of Franklin’s 250th birthday, Christ Church set the stone in a granite bed. When moisture seeped into the marker, it had nowhere to go.

“It was basically a sponge sitting in a container,” says Federico. The result was the deep crack that, upon lifting the stone out for restoration, Federico discovered went all the way through to the other side.

Hopkins says he has monitored the crack closely during his 15 years of working at the site. “Certainly it wasn’t getting any shorter,” he says. 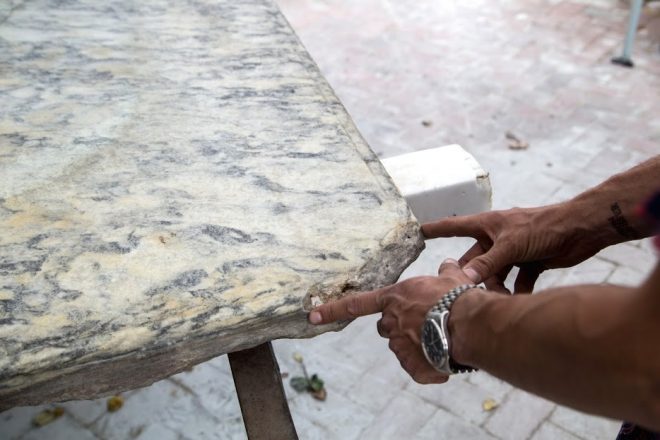 Be it from a daily barrage of pennies from the sky or moisture damage, Benjamin Franklin’s headstone was looking worse for wear. | Photo: Tyler Horst

Christ Church has been planning to save the stone for years, and finally found a window of opportunity to engage in a restoration effort last year. The church received grants from the Florence Gould Foundation, the University of Pennsylvania, and the Pennsylvania Historical and Museum Commission to help fund the project. They then turned to the public for the final stretch, launching a GoFundMe campaign that raised over $14,000, including a $5,000 donation from Bon Jovi.

“The beauty of the GoFundMe was the donations from regular citizens,” says Hopkins. “Ben Franklin was a man of the people, and he was a fundraiser in his time. He probably would have invented GoFundMe if he was alive.”

With the funds necessary to complete the project, Federico and Materials Conservation began work on the stone in April, lifting it out of its bed to carefully treat the damage and add drainage to the granite base. “We want to be able to put it back as close to how we found it as possible,” says Federico.

An unveiling of the restored tombstone will take place on Tuesday, May 23 at 5:30PM at Christ Church Burial Ground on the corner of Arch and 5th Streets. The ceremony is open to the general public. See event details HERE.