Reaching For The Heavens At Cret’s Tower Of Chimes 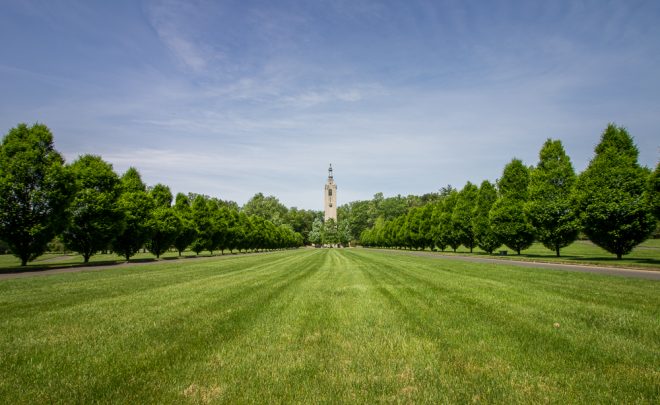 Paul Philippe Cret’s Tower of Chimes soars towards the sky and serves as a centerpiece for Whitemarsh Memorial Park in Montgomery County.| Photo: Michael Bixler

This Memorial Day weekend nearly 500 American flags will line the boulevards and grave sites of Whitemarsh Memorial Park in Horsham Township to honor our country’s fallen veterans. The parade of flags will wind their way past a Neoclassical mausoleum, a fountain, and through a sprawling, tree-lined lawn that leads up to the centerpiece of the cemetery, the 172-foot Tower of Chimes. Since 1960, families have come here each year to witness a sea of stars and stripes washing over the mostly flat, 160-acre burial ground. It is a unique event, punctuated by the architecture of the cemetery itself, which was designed by Paul Philippe Cret, one of Philadelphia’s most renowned architects.

That Cret, the architect of the Benjamin Franklin Bridge, became a prolific designer of cemetery monuments is largely due to an accident of history. While visiting his wife Marguerite’s family in France during the summer of 1914, Cret became caught up in Europe’s protracted stumble towards war. Cret, a reservist in the French Army, reported for duty and was assigned to the Chasseur Alpins, the so-called “Blue Devils.” Much of what is known about his time in the French Army is revealed through letters he sent from the battlefront to his wife and colleagues. 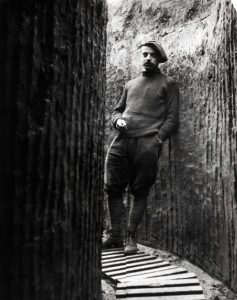 Architect Paul Phillipe Cret takes a smoke break during the Battle of Somme in 1916. | Image courtesy of the Cret Collection, Athenaeum of Philadelphia

After America entered the war, Cret, now a lieutenant, was assigned as an interpreter and liaison for American forces. His skills caught the attention of General Pershing who was impressed with Cret’s ability to produce up-to-the-minute war maps for the operations of French and American troops. This connection would play an important role in Cret’s future architectural work.

Cret returned from the war with debilitating hearing loss and a Croix de Guerre medal on his chest. Back in Philadelphia, he resumed teaching at the University of Pennsylvania and remained a practicing architect. It was in this post-war period that he designed the Delaware River (Now Benjamin Franklin) Bridge, the Barnes Foundation gallery in Merion, and the Rodin Museum on Parkway. However, reminders of the war were close at hand. One of Cret’s first commissions upon his return was to create a memorial to the son of President Theodore Roosevelt who had been killed in aerial combat over France in 1918.

In Philadelphia, residents of Frankford commissioned Cret to create a memorial for neighborhood locals who had served in World War I and perished in the conflict. The Frankford War Memorial at Wakeling and Large Streets was dedicated on the fourth anniversary of Armistice Day (modern Veteran’s Day) on November 11, 1922.

Cret’s growing body of memorial work, combined with his connection to General Pershing, led the architect to his role as the consulting architect for the American Battle Monuments Commission in 1923. Pershing, now chairman of the commission, brought Cret on to design memorials, chapels, and cemeteries for America’s war veterans who died in Europe. Among these works are the Chateau-Thierry American Monument in Aisne, France, the American War Memorial at Gibraltar, and the Flanders Field American Cemetery and Memorial in Waregem, Belgium.

It was through these commissions that Cret gained the attention of George Meagher, a real estate broker from New Jersey who was planning to build a private cemetery just outside of Ambler, Pennsylvania. Meagher’s interest in the funerary business was piqued after a colleague suggested that cemeteries could provide steadier income since they were not subject to the same fluctuations as the real estate market. With this in mind, Meagher scoured the country’s burial grounds for research. According to Joe Owsiak, a former park superintendent of Whitemarsh Memorial Park, the quest led Meagher to Forest Lawn Memorial Park in Glendale, California. Founded by Hubert Eaton in 1917, the cemetery would soon gain notoriety as being the final resting place of Hollywood’s most famous stars. 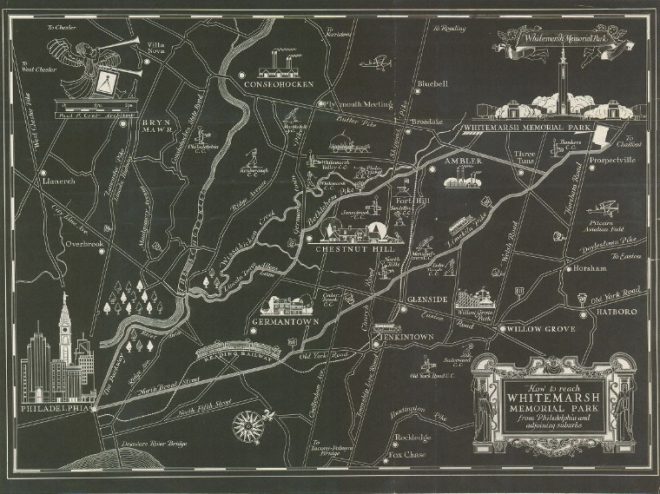 Forest Lawn represented a different kind of cemetery, one which was more focused on landscaping rather than ornate monuments. In contrast to Victorian cemeteries, where elaborate monuments both large and small were placed to honor the dead, memorial parks sought to remove most visual traces of death from the grounds by featuring rolling landscapes, curved drives, and manicured lawns. With nature being the emphasis, simple, flat, bronze or stone markers were used to aid in the easy upkeep of graves and allow visitors to view the grounds as an unbroken, panoramic vista. The theory behind the memorial park was that being in such a setting would help accelerate the grieving process since mourners would not be confronted with images of death at every turn.

Each memorial park sought to differentiate itself from other cemeteries by emphasizing burial services for its clients and creating peaceful, landscaped settings that often featuring the work of established artists. Although individual monuments were not allowed, Forest Lawn and other memorial parks included large, mass-produced statues placed in the middle of lot sections. The purpose of these monuments was instructional and they encouraged visitors to learn about art, religion, and patriotism. Other structures were intended to make the memorial park a joyful, dual-purpose destination where weddings could even be held.

Meagher believed that this idea would translate well outside of Philadelphia and acquired farmland in Horsham Township for the purpose of building a “Forest Lawn of the East.” Although the area was rural, there were many indicators that it was a promising location. The property, situated at the intersection of two state highways, would provide easy access to the city. In the following years, the crossroads became so busy that the intersection is where the first traffic light was installed in Montgomery County. The rolling farmland on the property also gave Meagher the blank canvas to execute his vision.

In 1930, Meagher and his investors brought on Cret and the landscape architectural firm of Harrison, Mertz, and Emlen to create plans for the new memorial park. The latter firm was largely known for creating gardens and residential landscapes for an all-star list of Philadelphia names including Biddle, Cadwalader, Crozer, Curtis, Drexel, du Pont, Elkins, Morris, Pew, Strawbridge, Tyler, and Widener.

Working between 1930 and 1939, Cret designed an administration building for the owners of the cemetery, walls and gatehouses, a bridge and fountain, family mausoleums, benches, stone vases, sculptures, a temple for a burial area known as “The Garden of Meditation,” and flat grave markers characteristic of memorial parks. A former 1860s schoolhouse on the property was converted into a chapel by Cret. Initial plans included the construction of a horticultural hall and chapel for the grounds, but these were both abandoned due to lack of funds. All designs featured the stripped classicism that had become the hallmark of his architectural style. 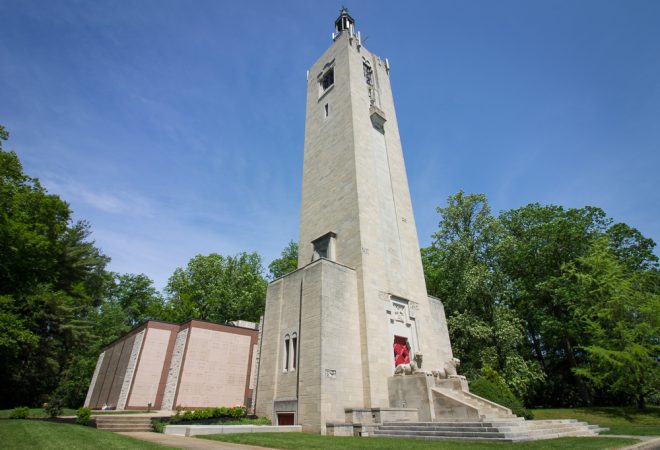 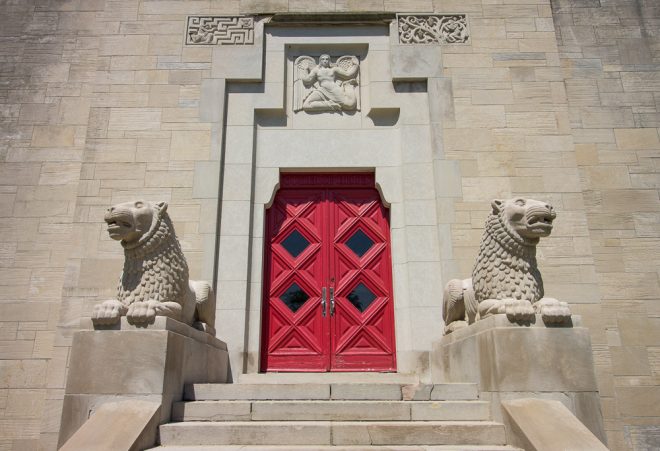 Cret also designed a 172-foot mausoleum, dubbed the “Tower of Chimes.” Situated at the end of a boulevard on a slightly elevated section of the property, the tower was set to be the focal point for the entire project. It contains six burial floors, an observation deck, and is capped by a copper cupola featuring a glass star finial. The smooth surface of the tower’s exterior is broken up at intervals by artwork and figures created by the French sculptor Jean De Marco who created each piece in his studio in France before sending photographs to Cret for approval. Lions guarding the bronze doors for the entrance to the Tower of Chimes were also designed by De Marco. With the exception of the temple in The Garden of Meditation, which was damaged by Hurricane Sandy and had to be demolished, all of the Cret-designed elements of Whitemarsh Memorial Park are still in the cemetery today.

Although one of Cret’s lesser-known works, the cemetery factors prominently within the context of his more celebrated memorials and monuments. The experience of working on the cemetery clearly had an influence on his architectural work. When he was buried at The Woodlands Cemetery in Philadelphia—where he was commissioned to design the entry gates during the latter part of his career—Cret chose to be interred beneath a simple nameplate of his own creation, a flat bronze marker similar to those that he had designed for Whitemarsh Memorial Park.

Brian Horne Brian Horne is a historian, preservationist, and woodworker who is passionate about connecting people to places. This passion has taken him from the University of Virginia to study history, to the battlefield of Gettysburg as a restoration carpenter. Brian's graduate thesis at Goucher College explored how the craft beer movement helped save historic structures and revitalize communities across the country. He has lived in every major city in the Northeast, but calls Philadelphia home.