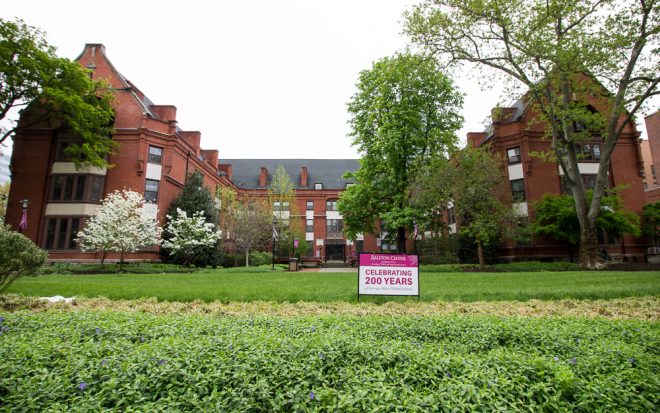 Philadelphia’s oldest organization devoted exclusively to senior care has aged well. Ralston Center, once known as the Indigent Widows and Single Women’s Society, is celebrating 200 years of continuous caring for vulnerable aging populations. The organization was one of the city’s earliest institutions devoted exclusively to geriatric services. By 1900, there were over 60 institutions providing geriatric services in Philadelphia–more than any other major city in the country. Today, Ralston Center has adapted its 19th century building and outreach model to serve the 21st century needs of a growing elderly urban population.

Sarah Clarkson Ralston founded IWSWS in 1817, the third of three women’s religious societies that she had a prominent role in organizing before her death in 1820. Ralston, born in 1766, was a devout Presbyterian. She was first involved in establishing both the Female Bible Society of Philadelphia and the Orphan Society in 1814.

Ralston was the eighth child of Matthew Clarkson, a patriot in the American Revolution who also served as the Mayor of Philadelphia from 1792 to 1796. She was married to Robert Ralston, a prominent Philadelphian, businessman, and philanthropist. The couple had 14 children together.

The residency at 3615 Chestnut Street was the third building to house the IWSWS; the previous two were modest, three-story brick homes on the 1700 block of Cherry Street. The Victorian residence was built in 1886 and designed by Wilson Brothers & Company, an architectural firm established during preparations for the Centennial Exposition. Mostly known for their institutional and commercial projects, Wilson Brothers & Co. also designed the main building of Drexel University and the train shed at Reading Terminal for the Pennsylvania Railroad. 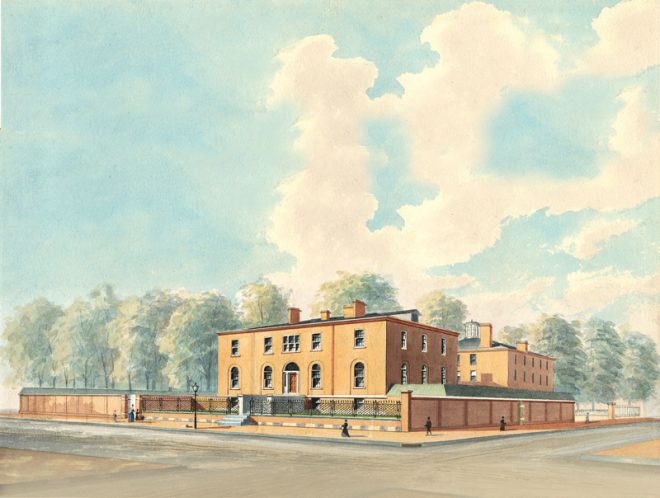 Watercolor painting of the Philadelphia Orphans Asylum and Widows’ Home in 1870 by David J. Kennedy. | Image courtesy of the Historical Society of Pennsylvania

Wilson Brothers & Co. designed the senior women’s care facility on an undeveloped lot belonging to the Keen estate, taking great care to accommodate 100 residents comfortably. The plan for each room included natural sunlight, heating and lighting–comforts that were deemed respectable at the time, but proved to be inadequate as the decades wore on. By the 1980s, a century after the building was built, occupancy was failing as residents preferred basic modern amenities like private bathrooms.

The University of Pennsylvania approached the Ralston Center in the early 1980s with a proposal for using sections of the building to house their Institute on Aging and geriatric program researchers.

By 1985, Ralston Center discontinued operations entirely as an elder care residence, but the organization’s mission continues to focus on improving the quality of life for seniors through programming, advocacy, and their new aging-in-place outreach initiative. Roughly 15 percent of the building is used by Ralston Center for wellness classes and additional services for their 3,500 members, with the remainder of the building leased to the University of Pennsylvania. 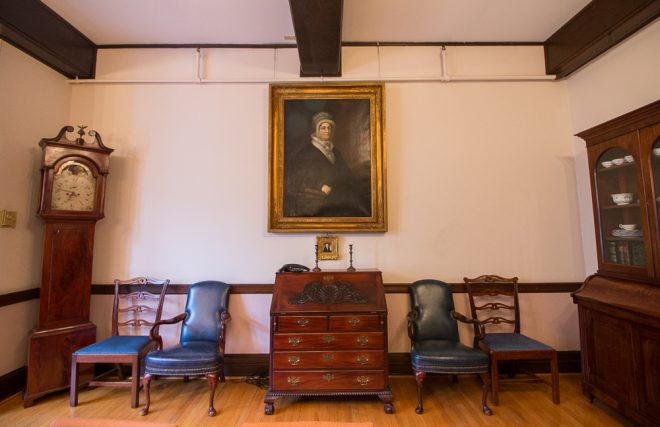 Traces of Ralston’s previous residents remain, as dumb waiters can still be found inside offices now occupied by Penn. Original fireplaces, shutters, fire axes, and chair rails are scattered throughout the building. The Center’s library was once a sitting room used by the “indigent widows” and single women to socialize. Some of the Ralston administrative offices in the west wing of the building were once residence rooms, and select furnishings left by former residents are still in the lobby. The old gas lights that lined the halls were removed for safety precautions.

It is unusual that an organization proclaiming an “indigent” target audience (a word not dropped from the organization’s name until 1964) was mostly interested in attracting wealthy residents. Reflecting an awareness of the fragile financial security and dependency of women during the early 19th century, IWSWS helped keep elderly widows and single women in the lifestyle to which they were accustomed to. In meeting minutes from 1845, the organization states that “the only requisites for participation in its charities are advanced age [then defined as 60], destitution, and meritorious character. It is especially designed to furnish an asylum for those whose earlier lives have been passed in the more refined walks of life, and whom experience, therefore, has not inured to the struggles of penury.” 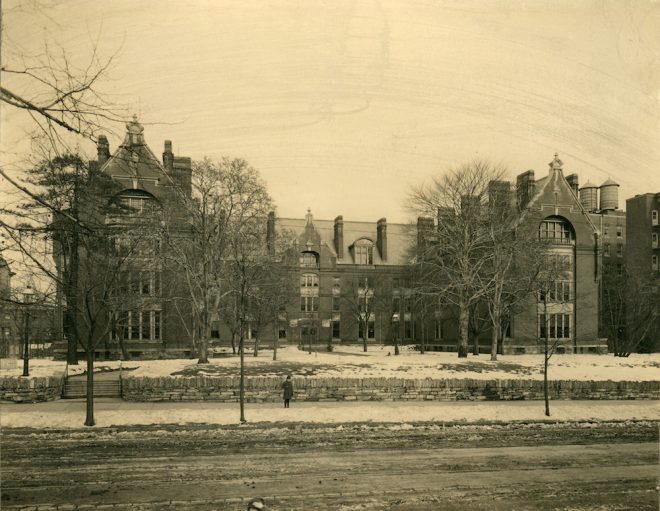 Inside the residence of the Indigent Widows and Single Women’s Society in the late 1800s. All images courtesy of Ralston Center.

The application process of IWSWS was dramatically different from elder care residential facilities today. In addition to the requisites described in the aforementioned meeting minutes, applicants had to provide references attesting to their moral character. Although the facility was non-sectarian, many were also Protestant Christians which may have influences admittance. Good mental and physical health were also admission requirements, and the admissions committee filtered out residents suffering from dementia and terminal illnesses that would prevent residents from caring for themselves.

Successful applicants were required to pay an entrance fee, furnish their own rooms, abide by the house rules, and relinquish all the property that they brought into the facility to IWSWS upon their death. (After Ralston Center closed its residential facilities in 1985, a sale was held of former residents’ furnishings.) The facility aimed to create a real home for its residents, creating a social atmosphere akin to a large family.

Over time, these admission policies became much more equitable. When IWSWS merged with Tilden Home for Aged Couples in 1962, partners were allowed to reside at the home together, thus allowing men. The organization adopted the name “Ralston Center” in 1973 to reflect the fact that it served both genders. At this point, antiquated income requirements (and unspoken religious affiliations) had been removed from the application process.

Today, Ralston Center uses roughly 15 percent of its building for wellness programs and administrative purposes, leasing the rest of the space to Penn departments that share their elder care mission. The Penn Institute on Aging, which  studies forms of dementia that would have prevented applicants from residing at Ralston, is headquartered there along with the Penn Geriatric Medicine Program. 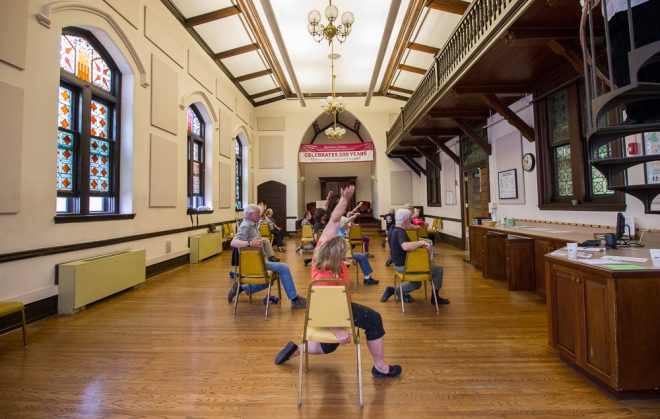 Ralston Center now focuses largely on helping people seniors age in the comfort of their own homes and neighborhoods through the the Ralston My Way program. “Older adults want to live independently at home in their communities,” explained Jean Papaj, director of communications and marketing at Ralston. Ralston My Way provides the elderly with affordable home and personal care, transportation to appointments, errands, and home repairs. “They like that they can make one phone call and get a lot of the things they need,” says Papaj.

The chapel at Ralston Center that once served as a devotional space by devout Protestant residents is now used for chair yoga and other physical wellness classes geared towards members aged 55 and older. Former residence rooms, with doors still adorned with hand-painted gold numbers, are now used as offices and meeting space.