Centennial Commons Puts Community Back Into The Park 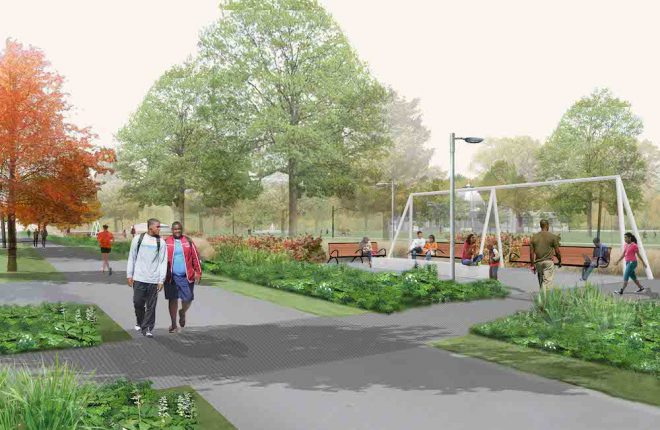 Centennial Commons, marked by the impressive Smith Memorial Arch and Memorial Hall, is located in the Parkside neighborhood of Philadelphia and serves as the gateway to West Fairmount Park. It was the site of Centennial Exhibition in 1876, which was attended by more than 10 million visitors. But over the course of the 20th century, upkeep of this area of West Fairmount Park fell by the wayside. Today, although it remains a beautiful piece of green space in the heart of the city, it lacks the infrastructure necessary to function as the community asset it once was. However, a large partnership between city government, nonprofit organizations, and concerned citizens seeks to change the face of Centennial Commons and restore it to its former glory.

Nearly a decade ago, the Philadelphia Commerce Department and several other city agencies created the Centennial District Master Plan (CDMP), which outlined an effort to restore amenities and accessibility to several parts of Fairmount Park. However, the funding wasn’t there and the plan, like the park it hoped to revitalize, was moved to the backburner. Then, in 2014, the Fairmount Park Conservancy partnered with PennPraxis to begin work on a new plan, implementing much of the original ambitions of the CDMP, titled “Reimagining the Civic Commons.” Phase 1 of this plan deals with the Centennial Commons and Parkside Edge.

“There was a great interest in reimagining West Fairmount Park, to make it more accessible and appealing to the neighborhood around the park,” said Rick Magder, executive director for the FPC. “It’s a great regional landscape, but it’s quite vast. Part of the idea is to create amenities that will make it more like a neighborhood park.”

“Fairmount Park has suffered from many, many years of disinvestment,” added Chris Dougherty, an urban planner who manages the FPC’s capital projects. “There’s been a retraction that’s happened over the years as maintenance budgets have suffered. Our goal is to create the amenities that people not only expect, but remember from what was once this very rich, centennial landscape.”

These amenities include basic things like trash cans and benches–simple, but necessary additions. A park without benches doesn’t function as a neighborhood social outlet. Currently, the people who live across the street have to carry folding chairs across busy Parkside Avenue if they want a seat in the park. 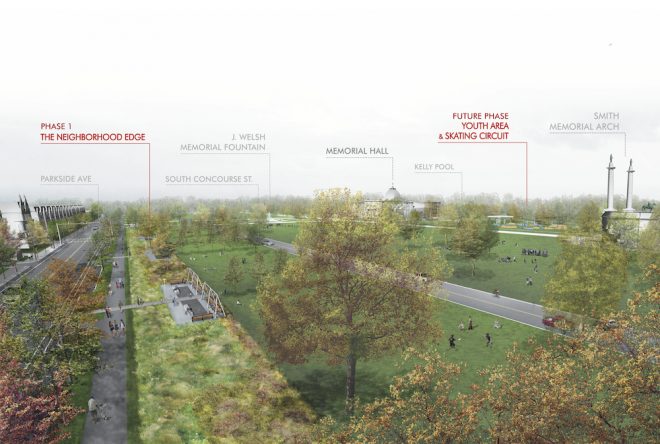 Aerial rendering of Phase 1 and future addition of a youth area and skating circuit. | Image courtesy of Fairmount Park Conservancy

The traffic on Parkside Avenue is itself an issue addressed in the plan. The volume and speed of cars that travel along the avenue is dangerous for pedestrians trying to enter the park.

“[This] is a real impediment for children, families and older folks to get across the street and enjoy the park,” said Dougherty. “Our project includes streetscape enhancement and traffic-calming efforts and signalized crossings. We want reinsert the pedestrian scale into a park that has really been given over, in many ways, to the automobile.”

The William Penn Foundation has been a huge asset to the Reimagining the Civic Commons project in terms of support and funding. The WPF got involved in 2013 as part of their Great Public Spaces program, an initiative to expand the organization’s public spaces work in Center City to areas outside of downtown. They have partnered with the Knight Foundation to begin work on the Centennial Commons project.

“We believe that every neighborhood in the city should have access to high quality public spaces,” said Shawn McCaney, executive director of the WPF.  “A lot of our work asks, how do you activate and reprogram existing public spaces? West Fairmount park was, based on our research, underused by the local community. Over time all of the amenities have been stripped out of that section of the park. Municipal budgets become increasingly constrained and parks are always the easiest thing to chop.”

McCaney maintains that the goal of the project is to benefit the residents of the adjacent neighborhoods. While people come from out of town to visit the Please Touch Museum, the Shofuso Japanese House, and the Philadelphia Zoo, the real focus is to make the park viable for the people who already live there, to make it a neighborhood park where people can interact with each other. 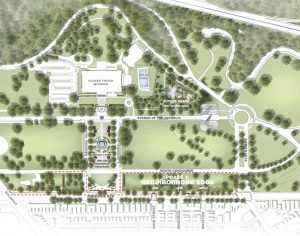 “I believe that parks and public spaces aren’t just public works or infrastructure,” said McCaney. “They’re really the connective tissue of neighborhoods. These are the things that connect people together. No one goes to Amsterdam and writes home about the sewer system.”

The ‘neighborhood room’ model planned for the space is, according to Dougherty and Magder, inspired by the big porches of the houses across the street from the park. It’s where neighbors say “hello”, share a moment, laugh, and have a conversation. The designers sought to replicate those kind of spaces within the park with the addition of ‘porch swing’ structures and benches.

“It’s a beautiful place to look at, but there’s no center of gravity there, said landscape architect Bryan Hanes whose company, Studio Bryan Hanes, did the design work for the project. “There’s no place to go to meet your neighbors, to hang out, read a book, start a conversation.”

Hanes says the goal of the ‘neighborhood room’ model is to create little nodes or hubs for communities to be able to come together, throw a football, or have a picnic.

“We’re trying to break down the scale of the place through some landscape gestures to make it more accommodating to smaller groups of people,” he said.

“We wanted to use the stormwater as a way to create gardens that faced the houses [on Parkside Ave},” he said. “To give the neighbors something to look at. It starts to elevate the character and the quality of the place and at the same time serves an important water function because of its proximity to the river. This is why Fairmount Park was created, to protect the watershed.”

On April 20th, the Fairmount Park Conservancy held a celebratory groundbreaking ceremony for Phase 1 of the Centennial Commons revitalization project, part of a larger effort, “Reimagining the Civic Commons” that will reenergizing five underused spaces for public use including the Reading Viaduct, Bartram’s Mile, Lovett Library and Park, and the Discovery Center in East Fairmount Park. The construction of Centennial Commons is expected to be completed by Fall 2017. 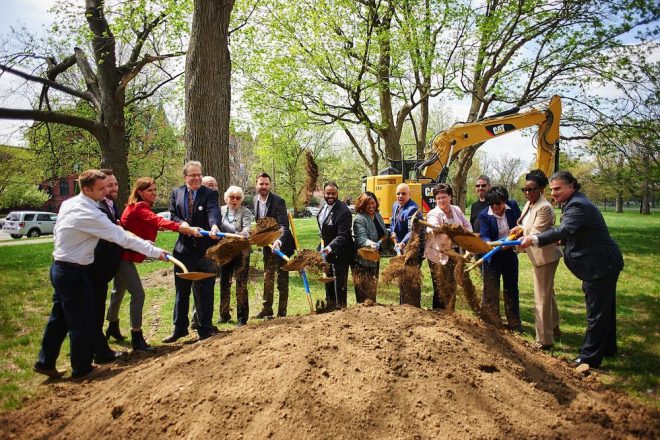 “Projects like these should be the norm and not the exception,” said Mayor Kenney in his remarks.

Commissioner Kathryn Ott Lovell announced that Seravalli Inc. had been awarded the bid for general contractor for the project and that 5% of the contract will be sourced to businesses within the Parkside zip code.

Under Hanes’ vision, the renovated park space will include new play areas, park benches, trails, and nature garden. The Philadelphia Water Department will use the opportunity as a way to better manage stormwater runoff within the park. Upon the completion of Phase 1, Centennial Commons will be home to five acres of sustainable stormwater management including seven rain gardens, a drainage ditch, and the planting of new vegetation to act as a riparian buffer (a natural filter between land and streams).

As a child, State Representative Vanessa Lowery grew up near Centennial Commons. The park was a fixture of her recreation. She played tennis there and swam in the pool at Memorial Hall.  “To see the legacy that I had as a child become the legacy for children coming up now is just incredible,” she said.