Editor’s Note: A version of this story was published in the Spring 2017 issue of Extant, a publication of the Preservation Alliance for Greater Philadelphia.

The first time Eric Blumenfeld owned the Divine Lorraine, he faced a hard decision. In 2005, Philadelphia lenders weren’t quite ready to share his vision of a reinvigorated North Broad Street. They made him choose between the Lorraine and a former industrial building he had bought down the street. 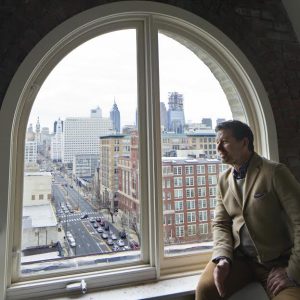 Weighing the Lorraine’s complexities against the more straightforward Mulford Building conversion, Blumenfeld went with the numbers and, reluctantly, parted ways with the Lorraine.

The Philadelphia of today, with cranes dotting the skyline from West Philly to Fishtown, gave Blumenfeld a rare second chance. He got the Lorraine back in 2012, now totally gutted.

That Blumenfeld was able to rescue even the shell of the building is an indication how attitudes toward North Broad have changed over the past decade. Blumenfeld may still be the corridor’s prime visionary, but other developers, institutions, and the City, via the non-profit special services district North Broad Renaissance, now celebrate the storied street’s potential.

Historic restoration has so far played a significant role in instigating North Broad’s long anticipated revival. With a refurbished Divine Lorraine as lynchpin, its giant letters gleaming, the prospect for other restoration projects looks positive. For now.

Significant chunks of North Broad’s historic architecture currently stand unprotected. Will the Divine Lorraine’s success help save them? Or make them all the more vulnerable to development pressures? 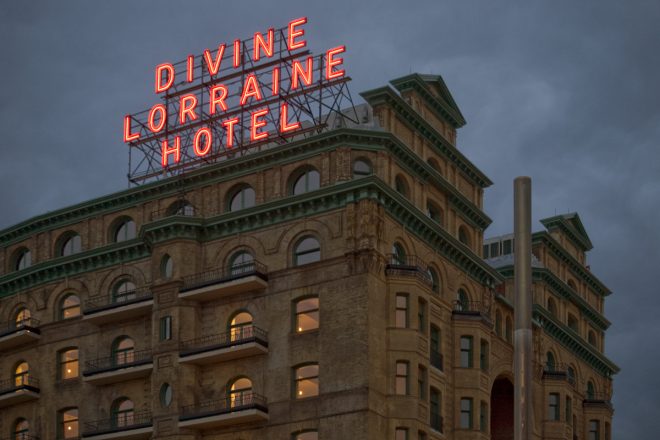 On November 8, 2016 the iconic sign of the Divine Lorraine Hotel came alive after 40 decades of darkness. Crowds gathered in the rain to witness the event. At right, a North Broad light pole pales in comparison. | Photo: Bradley Maule

The mile-and-a-half stretch from City Hall to Temple University has been a shifting panorama of architectural fashion and function for 150 years. In the late 1800s, as the Industrial Age made Philadelphia the Workshop of the World, its bosses built trophy homes along Broad Street close to both their factories and the heart of the city. By the 1920s, with cars affordable and ubiquitous, the industry made North Broad into Automobile Row, with factories, showrooms, and stores for accessories like tires and parts. By the turn of the 21st century, decades of disinvestment and redlining, white flight, and divisive politics had sucked the vitality from North Broad Street. Towering over all of it, bellwether of North Broad’s ebb and flow, was the Divine Lorraine.

When it opened in 1894, the Lorraine Apartments, Philadelphia’s first residential high-rise, was an opulent landmark whose intricacies were amplified by vistas down Ridge Avenue and Broad Street. Architect Willis Gaylord Hale’s building provided a luxurious capstone to North Broad Street’s emergence as a home for the well-to-do. Hale’s Victorian palace became the Lorraine Hotel in 1900. In 1948, Reverend Major Jealous Divine—Father Divine—bought the hotel for his International Peace Mission movement, adding a “Divine Lorraine Hotel” neon sign to the roof. Divine welcomed anyone to the Peace Mission irrespective of race, gender, or religion, so long as they followed strict rules: no smoking, drinking, gambling, or sex. In that modest measure, the Divine Lorraine became the first racially integrated hotel in Philadelphia.

The Peace Mission kept the building, including its marble lobby, plaster ceilings, and twin penthouse ballrooms, in good shape, well past Father Divine’s death in 1965. His widow managed to keep the lights on until 1999.

By then, decades of economic decline had dulled North Broad’s luster. By the time the North Broad Street Mansion Historic District was designated by the National Register of Historic Places in 1984 (see “Unlisted,” p. x) many of the grandest homes had already been lost, including another Hale extravaganza, the five-story Widener mansion, subsequently incarnated as a Free Library Branch, and William L. Elkins’ lavish James H. Windrim-designed home, later incorporated into the 10-story Majestic Hotel. Three fast food restaurants and a gas station now stand in their place, where Broad intersects with the long east-west artery of Girard Avenue.

By the 1990s, the Mercantile Club (Baker & Dallett, built in 1892), Broadwood Hotel (Ballinger, 1924), Lulu Temple (Frederick Webber, 1903, one of America’s first Islamic-styled buildings), and a pair of 1851 buildings (an Odd Fellows Hall and the Spring Garden Institute) had all joined the magnates’ mansions in the dustbin of landmarks. When the Divine Lorraine closed in 1999, it very well could have joined them, were it not so massive. 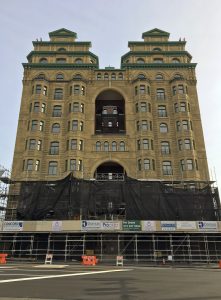 The graffiti that once marred the Divine Lorraine Hotel has been removed, and the building’s trim is painted to match its original shade of green. | Photo: Bradley Maule

The National Register of Historic Places recognized the Divine Lorraine in 2002; the Philadelphia Register followed in 2005, adding a local layer of protection —for its exterior. As for the interior, the owners removed everything — doors, light fixtures, the signs reading “GOD” and “PEACE,” the ballroom floors — and sold it for salvage. Then they bailed.

Come 2012, with the Divine Lorraine at its graffiti-covered nadir, the City recognized its importance as a potential centerpiece of North Broad Street’s rebirth. Alan Greenberger, the city’s Deputy Mayor for Economic Development for Mayor Michael Nutter’s eight-year administration, would not rest until the building was brought back to life.

“Here’s this spectacular old building in a city of historic buildings, and it’s a 10-story billboard of blight that reads, ‘don’t invest here,'” Greenberger says. “It was bringing everything down around it and we finally said, ‘we have to get this done.'”

When Blumenfeld won the Lorraine back at sheriff’s sale, Greenberger and Nutter were admittedly nervous. Now, Greenberger’s impressed. “When you look at [the building] now, he’s getting it done. It’s really happening.”

In addition to 101 apartments, the reborn Divine Lorraine will have a bi-level restaurant on the ground floor, a cafe, a basement speakeasy, and in a nod to its lodging days, the building’s five-story annex will eventually become a boutique hotel. The building’s prominence – its size and its location – make it the tie that binds the growth in the adjacent neighborhoods together.

“When you look at the Divine Lorraine, it’s the same distance from City Hall as 34th and Walnut,” Greenberger says, referring to the heart of booming University City. “Temple’s in the middle of unprecedented growth, and Center City continues to grow, so [North Broad Street’s revival] is really a matter of connecting the dots—of robust energy, economics and culture.”

A Main Street in the Making 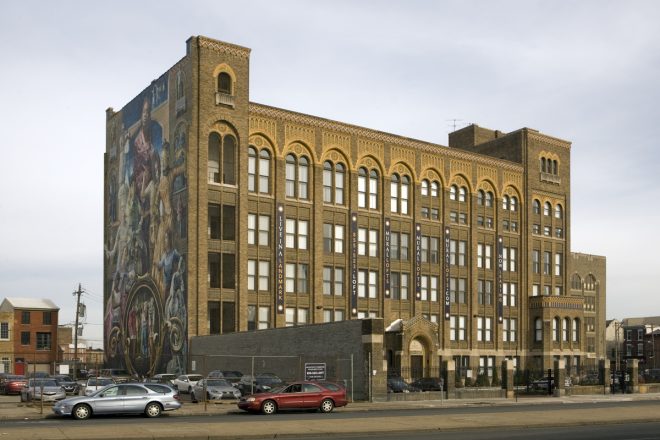 In the years since relinquishing the Lorraine the first time, Blumenfeld was busy laying the groundwork for North Broad’s revival. In 2007, he completed his converting the 1913 Mulford Building into the 265-apartment Lofts 640. The old factory building drew instant attention when Marc Vetri’s Osteria restaurant opened on the ground floor. He next focused on the former Wilkie Buick showroom, half a block away, remaking that into Vetri’s next restaurant; a Stephen Starr restaurant; and Joe Volpe’s catering hall, Vie. At the Stutz Building, where Starr moved his own catering operation, Blumenfeld removed Mid-Century Modern panels to expose old brick and a cornice. At 523 North Broad, Blumenfeld converted the former Thaddeus Stevens School into Mural Lofts.

Meanwhile, Philadelphia’s building boom began growing Center City northward. The Pennsylvania Convention Center expansion opened a new “front door” at Broad and Race in 2011. Mixed-use and residential towers will soon be rising from Cherry to Callowhill and up to Spring Garden, with Hanover Company, Parkway Corporation, and Bart Blatstein leading the development. Increased scale and capacity motivate development more than recognition of Broad Street’s historic fabric. Blatstein’s investment in two properties listed on the National Register of Historic Places – the circa-1959 Pennsylvania State Office Building and the 1924 Inquirer Building — may be the exceptions that prove the rule. The marble-clad, Modernist slab at Broad and Spring Garden, once a hive for the workings of state bureaucracy, has been repurposed as the 204-apartment Tower Place. As for plans to transform the 90-year-old newspaper tower, now that his hotel and casino proposal have fallen through, Blatstein says only “stay tuned.” 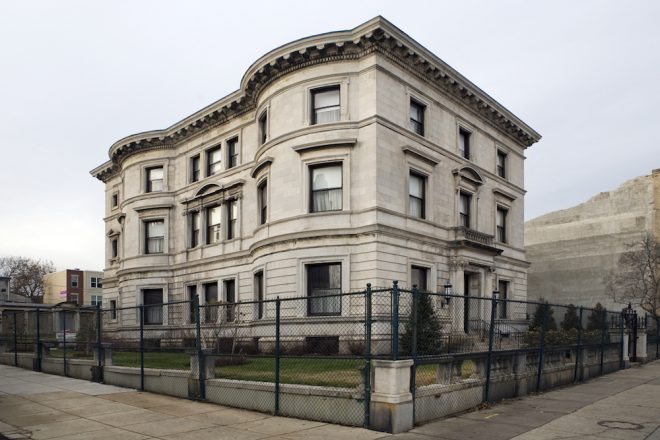 The beautiful Burk Mansion at 1500 North Broad Street, owned by Temple University, has sat empty since 1995. The mansion is one of a number of historic properties in the university’s real estate portfolio that remain vacant, vulnerable, and without a preservation and reuse plan. | Photo: Bradley Maule

A mile to the north, Temple University’s rapid evolution has made its swath of North Broad cleaner and livelier. From Blatstein’s Avenue North retail complex and The Edge apartments at Cecil B. Moore Avenue, both now 10 years old, to the 27-story Morgan Hall, which opened in 2013 – Temple has favored new construction over preserving historic sites. The university has a long legacy of demolition, and in the past few years razed six properties on the 1500 block of North Broad, including an Italianate townhouse listed on the Philadelphia Register of Historic Places. Last year Temple demolished the mammoth 1970s William Penn High School designed by Philadelphia’s Mitchell/Giurgola architects to make way for an athletic field that extends to Girard Avenue.

Temple’s track record leaves the fate of many fine buildings uncertain, especially the PRHP designated Burk Mansion, Built in 1909 as the last of the North Broad mansions, the 27-room stone home, owned by the university, has been empty since 1995. Also vulnerable are five successive, well-kept late 19th-century mansions on the next block south, none of them on the Register. The Preservation Alliance did successfully nominate the circa-1873 Loyal Order of Moose Lodge #54, on the 1300 block. But protection covers only the intact brownstone façade, adorned with a sculpted moose head. A boutique hotel proposal threatens the historic interior, home of the Legendary Blue Horizon, which hosted boxing matches from 1961 through 2010. 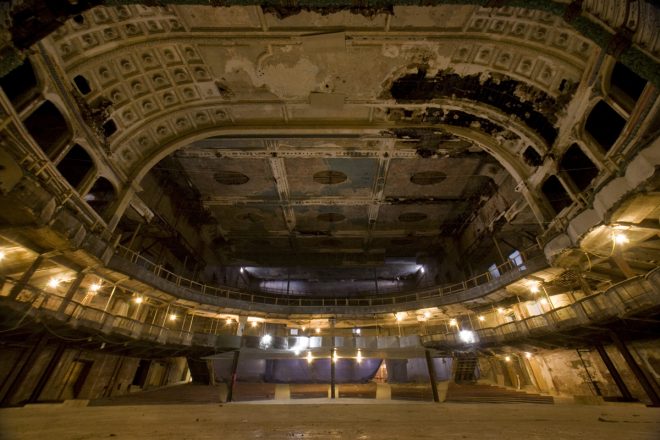 Looking back toward the balcony in the main auditorium of the Metropolitan Opera House. | Photo: Bradley Maule

As Blumenfeld looks up and down Broad Street from the top floor of the Divine Lorraine, he considers the smaller restoration projects’ key role in the revitalization. “We look at the corridor as one project,” he says, “I see people like us, and Bart, and Parkway doing these big projects as important dots between Center City and Temple, and where North Broad Street really starts to work is, the small businesses and new developers come and fill in the gaps.”

Also key are projects that infuse the streets with life, day and night. “It’s great to have people living in these buildings, but we need to create activity,” Blumenfeld says. 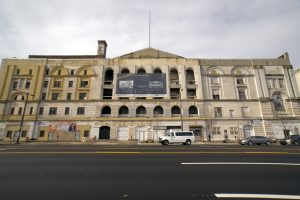 In 2013, Blumenfeld entered into partnership with Holy Ghost Headquarters Church, which had occupied the building since 1996. He envisions the former opera house, designed by William McElfatrick and built by impresario Oscar Hammerstein in 1908, as a multipurpose community center (including space for the church) and 4,000-seat concert hall, at once “Philadelphia’s Radio City Music Hall” and “Francisville’s town hall.”

Thomas, who grew up at North Broad and Erie Avenue, is well aware that the corridor’s potential is tied to its historic fabric. “We have a lot of room to grow on Broad Street,” she says, “but we also have a good stock of buildings waiting to be put back to use.”

Blumenfeld would second that. “What I’ve learned about historic buildings,” he says, “[is that] you don’t work against them. They’ve figured out a way to survive for a hundred years; you figure out a way to work with them.”

The same could be said for North Broad Street. The long-term survivor is poised to revive.

A selection of North Broad Street buildings that are not listed on the Philadlephia Register of Historic Places. Photos by Bradley Maule. 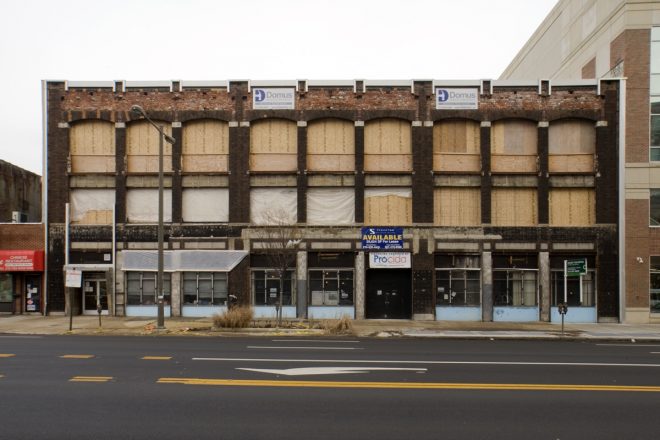 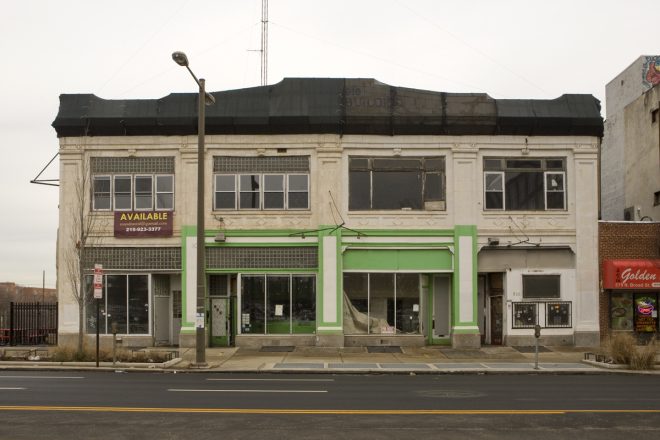 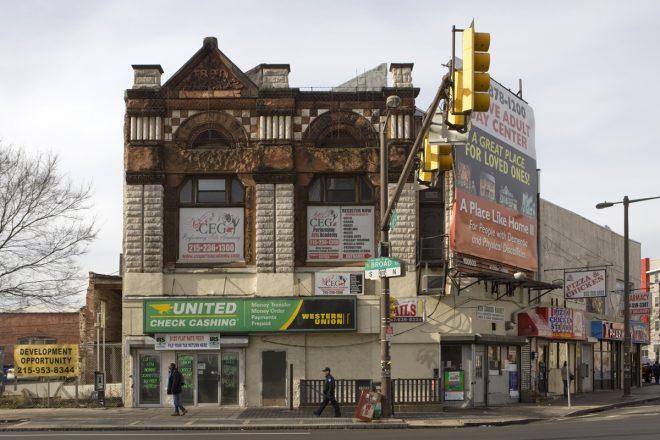 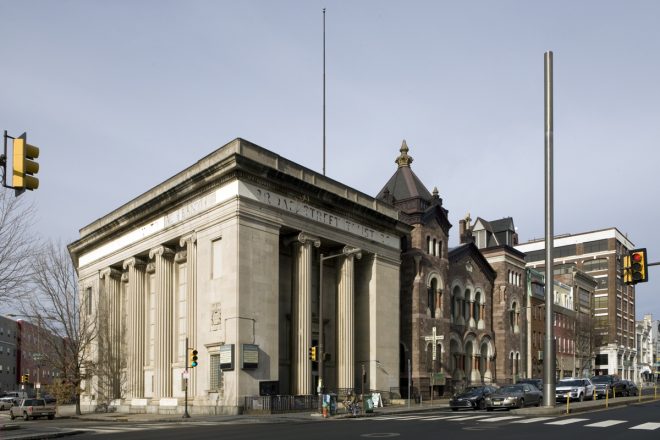 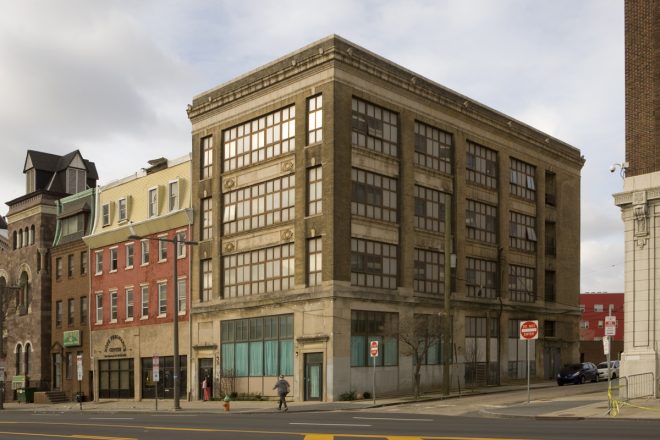 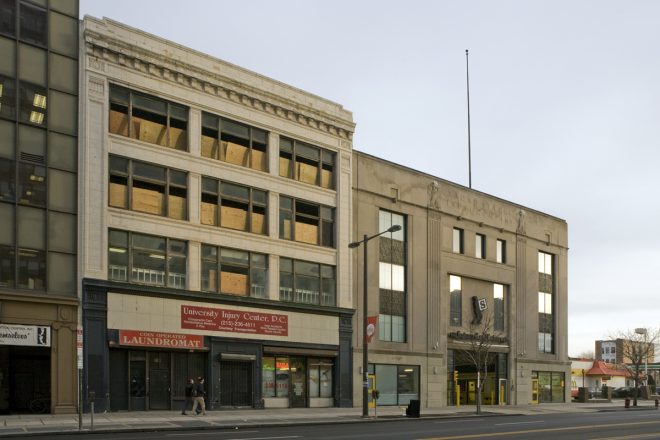 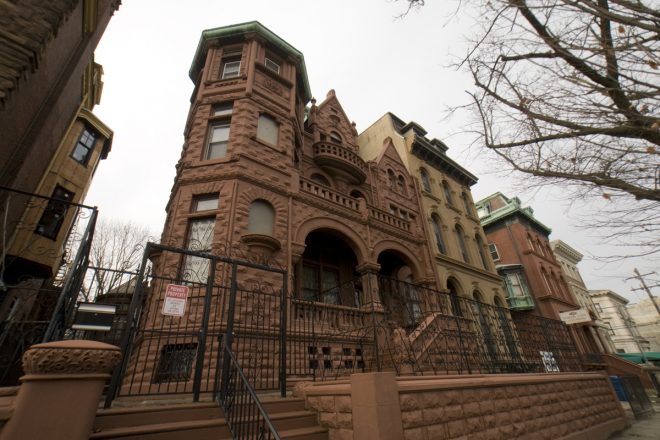 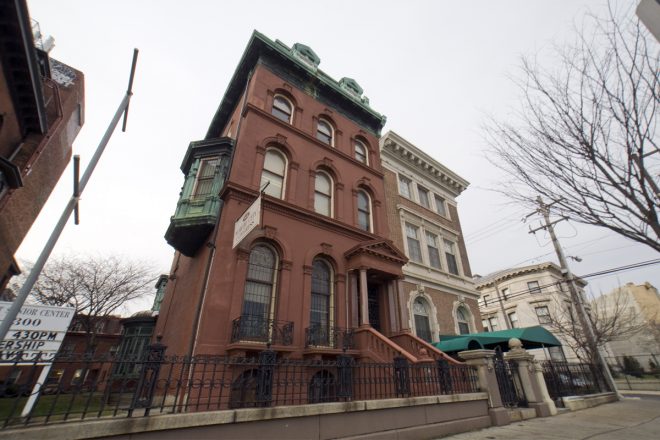