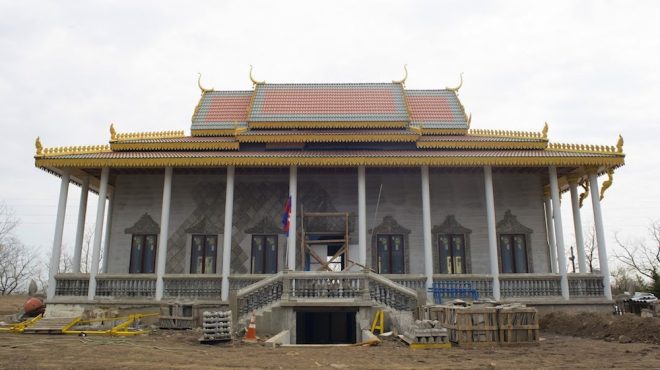 As I biked past the entrance to Bartram’s Garden last Saturday I could hear splashes of psychedelic rock guitar echoing in the distance. The week-long celebration of Cambodian New Year had begun, and I was excited to revisit the site of the Wat Khmer Palelai Buddhist monastery after coming across it years ago.

The smell and smoke of grilled meats filled the air, and a crowd of hundreds gathered at the festival. Food and gift vendors lined a corridor where bubble tea was being sold alongside traditional clothing and toys. The music stage attracted a circle of dancers and children blowing clouds of bubbles. In the background, the temple’s roof electrified an overcast sky with gilded ornamentation. 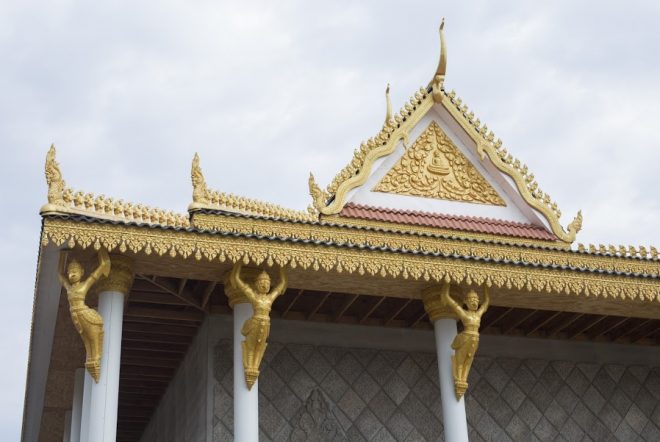 In 2013, I wrote a story for Hidden City about the Buddhist monastery, tucked away on 58th Street near the post-industrial Schuylkill River riverfront. At the time there were plans drawn for a monastery to be built, but construction had yet to start. In the years since, the temple has been slowly pieced together, relying on donations from the Cambodian community, keeping to traditional Khmer architecture. The result so far is something quite stunning. Wat Khmer Palelai, located at 2701 S. 58th Street, has a multi-tiered roof covered in curved tile and bright golden molding running the course of the roofline. Figural sculptures of Apsara, the female spirit of the clouds and water in Buddhist mythology, are perched atop the columns that line the porch. Decorative tiles are being placed on the exterior walls, and large cobra snake sculptures representing Nāga, a protector of treasure often associated with bodies of water, stand guard at the bottom of the temple’s stairs. 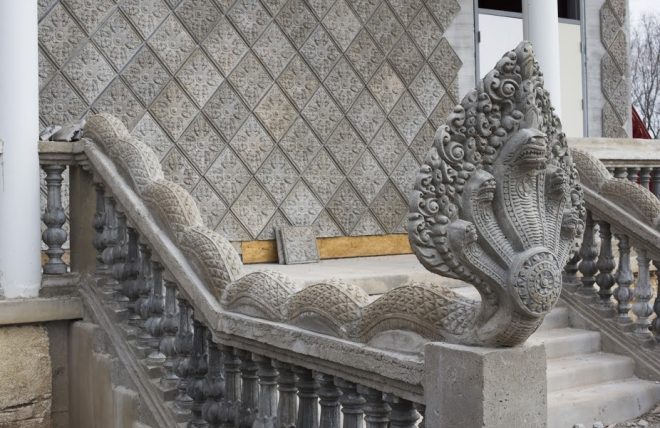 Nāga protects the second entrance of the temple along the railing of the front stairs. | Photo: Dan Papa

I spoke Master Han-Hea, one of the resident monks at Wat Khmer Palelai, with the help of translator Vichai Chhern. “This temple is a public place, it belongs to Cambodians, but not just Cambodians, it’s for any national who believes in Buddhism,” said Master Han-Hea.

The temple should be finished next year if the rate of donations received stays consistent, said Master Han-Hea. After the temple is complete, work will begin on building a school and a cremation center. “It is coming up from the ground from nothing, not from big time donations. We are not taking a major loan from the bank. It’s the people from Cambodia or Laos who come here and donate five dollars or ten dollars, whatever they can, so it’s step by step, little by little. We still have more decoration according to the tradition and culture. A lot more work needs to be done.” 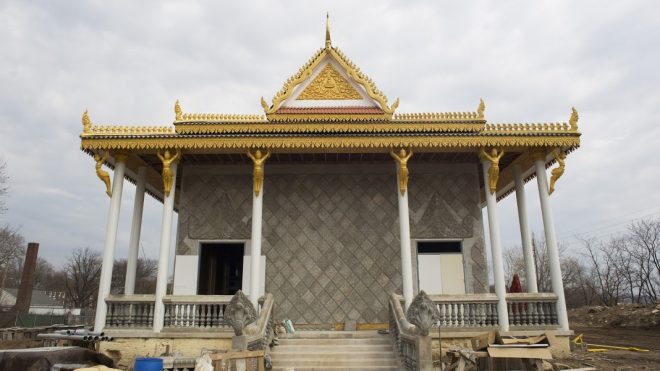 Master Han-Hea hopes that Philadelphians will help bring his vision to fruition through contributions of their own. “If anybody would like to make a donation to the temple, little or big, how much doesn’t matter. Right now we still need a lot of support from the public. From the time we started building we have spent close to 1.2 million dollars.”

Philadelphia has a large and growing Cambodian population centered around Buddhist communities steeped in vibrant traditions. During this moment of divisive politics and  regressive federal policymaking, it is the nurturing of immigrant communities, and the preservation of their native culture, that unites our city with the richness of diversity. 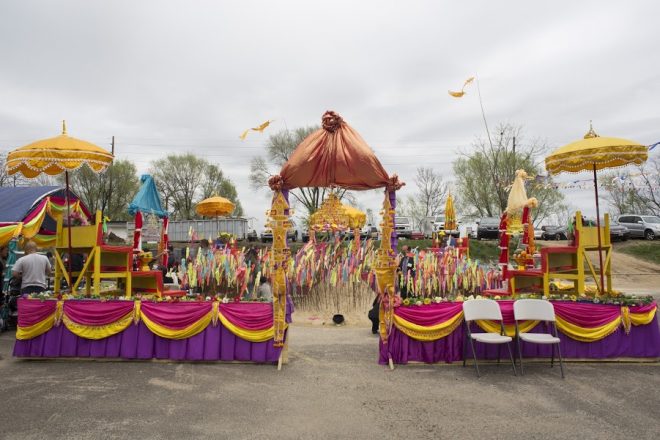 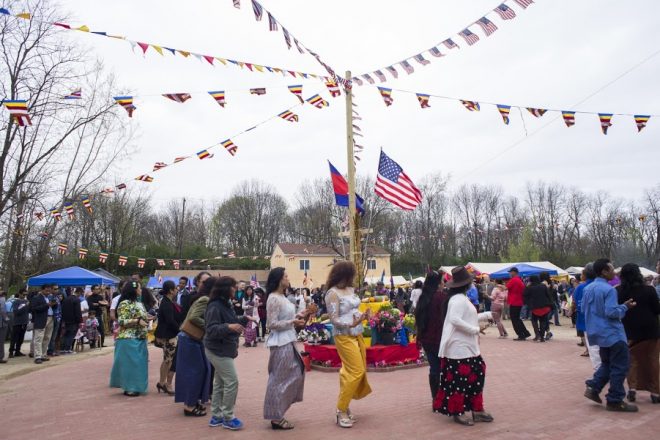 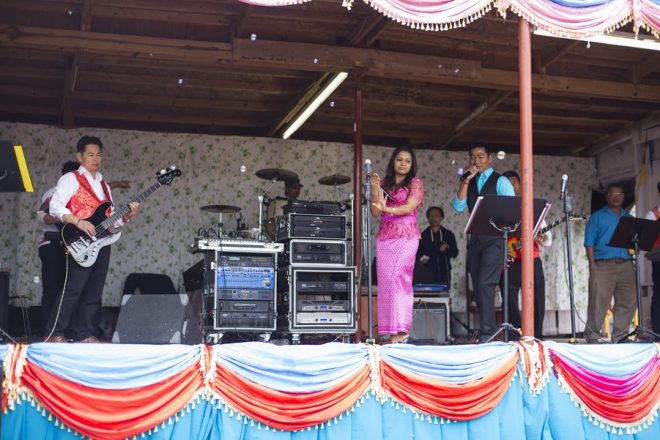 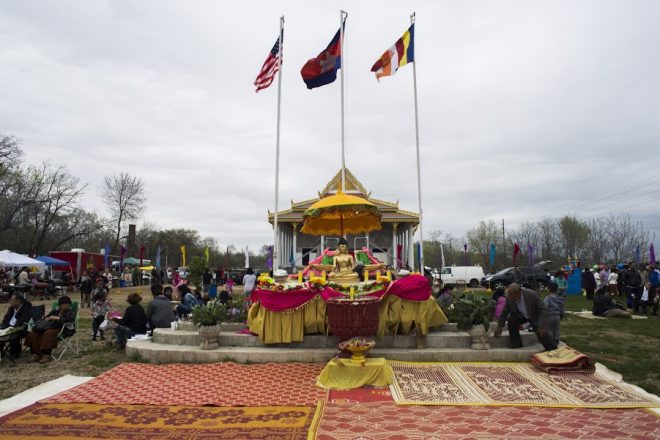 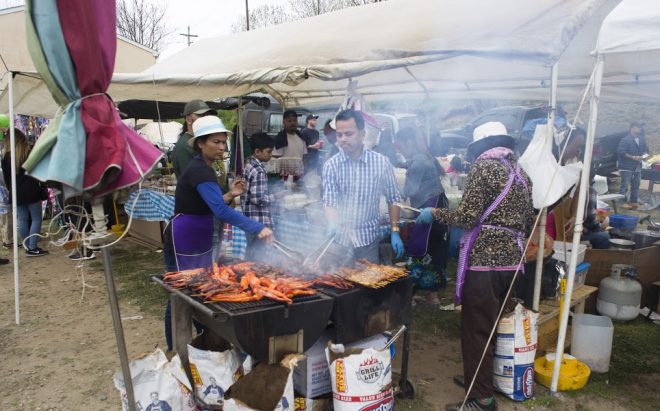 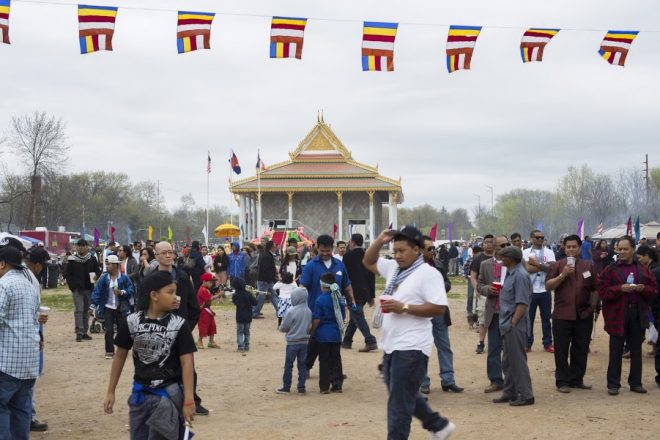 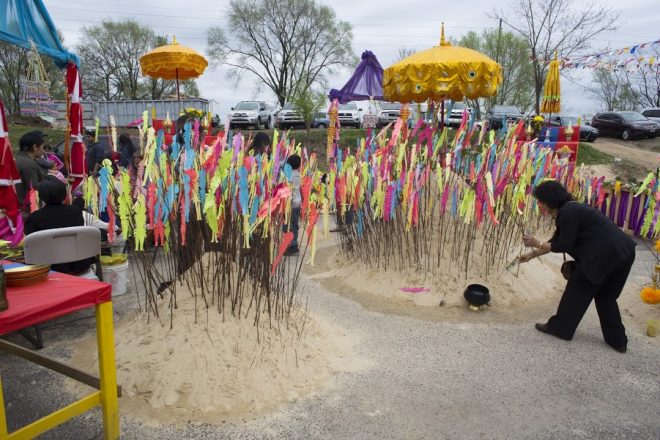