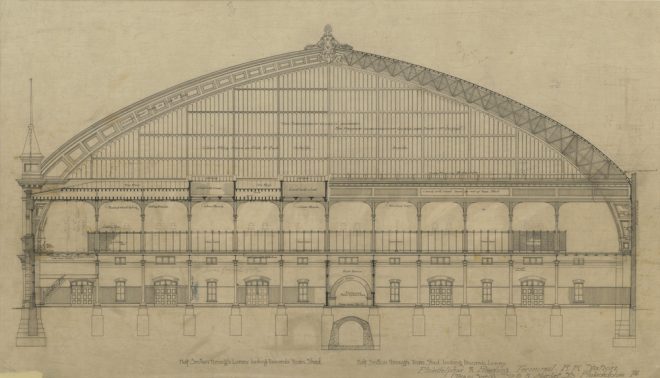 Philadelphia’s aging railroad infrastructure is experiencing a revival and the incidental trend is happening all over the city. The Rail Park finally broke ground last October after nearly three decades of planning, fundraising, and rousing public fervor. Manayunk’s 99-year-old concrete rail bridge reopened to pedestrians and bikes in 2015 after 30 years of disuse, while the nearby, lesser-known Pencoyd Bridge followed its lead a year later after decades of neglect. At Broad and Washington, the old Philadelphia, Wilmington, and Baltimore Railroad train shed–once a major rail hub where President Abraham Lincoln’s body was held for public viewing following his assassination—is being incorporated into Alterra Property Group and MIS Capital’s Lincoln Square project. (Rumor is, it’s being renovated for a high-end grocery store.) Even castaway railroad artifacts are enjoying the limelight. When Bartram’s Mile officially opens to the public on April 22, visitors will be greeted near the head of the trail by the Newkirk Monument, erected in 1839 to mark the opening of the Grays Ferry Bridge. The monument sat discarded and vandalized along Amtrak’s Northeast Corridor and SEPTA’s Airport and Wilmington/Newark Line for more than 80 years until a small grassroots campaign partnered with Parks and Recreation and the Fairmount Park Conservancy to move and conserve the long-forgotten obelisk.

Right on fortuitous cue, the Athenaumn of Philadelphia brings the history and architecture of these engineering feats to the forefront with their exhibition, Laying Tracks & Laying Foundations: Building for the Railroad, on view until May 12. 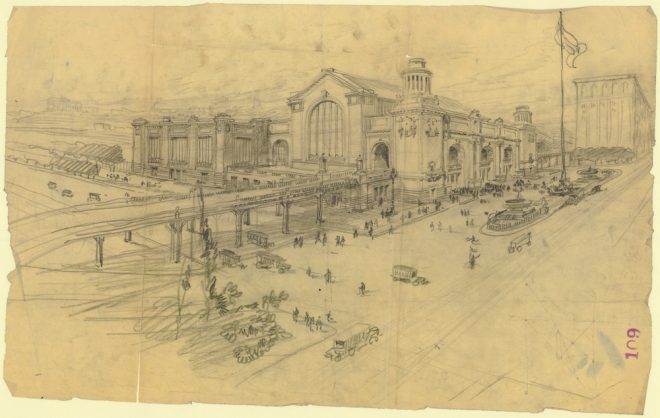 The show traces the introduction of the railroad in Philadelphia in the 1830s and spotlights the industry’s rise as a political, financial, and industrial force between the 1870s and the 1920s. Through 49 drawings, manuscripts, maps, and photos culled from the Athenaeum’s holdings, the exhibition unfurls the shape of Philadelphia’s architectural fabric and civic design formed by the commanding direction of railroad companies.

“The intent of the exhibition is not to concentrate on the social history, the lore, the machines or the toys, but to examine the buildings and structures that were designed for brand new uses, by two professions still in their infancy: architecture and engineering,” says Bruce Laverty curator of architecture at the Athenaeum. “Like the high-rise office building and the grand department stores that would emerge later in the 19th century, the railroads required entirely new building types, and designers met that requirement in a variety of beautiful and memorable ways.”

The fading artistry of draftsmanship is on full display through gorgeous, large-scale architectural drawings of Reading Terminal Station by the Wilson Brothers & Company, an ornate section of a car house by Collins & Autenrieth, a line drawing of a proposed Philadelphia Railroad station at 32nd and Market by Paul Cret, and a tidy ink rendering of the Newkirk Monument by Thomas Ustick Walt. 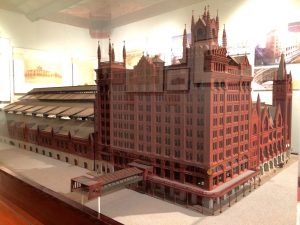 Paintings, original train schedules and travel pamphlets, and photographs featuring Shawmount Station the oldest remaining passenger station in the country, horsecar terminals of the Philadelphia, Wilmington, and Baltimore Railroad, and an Italianate depot on the 1700 block of Market Street bathe the gallery walls in a sea archival pearls.

The exhibit’s engrossing centerpiece, a 1/160th scale model of Pennsylvania Railroad’s Broad Street Station as it appeared in 1895, was constructed in vivid detail over a period of nine years during the 1980s-90s by train buff Chuck Denlinger. The station, designed by Wilson Brothers & Company circa 1891 and vastly expanded by Frank Furness between 1893 and 1893, was demolished to make way for Penn Center in 1953.

The exhibit begins with Matthias Baldwin who started off his career as a jeweler for Philadelphia silversmiths Fletcher & Gardiner. After building a reputation for steam engine building, he established the venerable Baldwin Locomotive Works at 19th and Hamilton Streets, later moving operations to North Broad.

The show then examines the evolution in architectural styles of rail stations, moving from simple utility sheds built along the tracks to public monuments adorned in Italianate, Romanesque, and Georgian Revival styles. Photographs from the early 1900s of Tulpehocken Station and Allen Lane Station serve as a reminders of their enduring, functional grace.

The Centennial Exhibition of 1876 is highlighted with decorous details of horsecar sheds and Pennsylvania Railroad’s temporary Centennial Depot. Broad Street Station and Reading Terminal get the full treatment in separate sections before segueing into Pennsylvania’s Railroad’s “Philadelphia Improvements” era when suburban tracks were buried below grade and sweeping gestures in railroad efficiency set the stage for the age of the automobile and urban renewal. 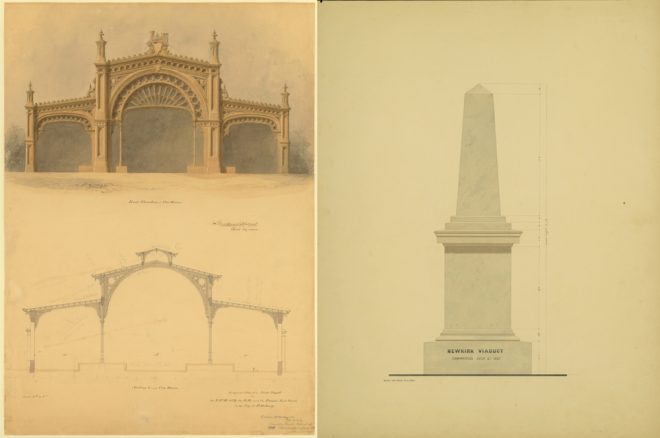 The exhibition ends by leaving the city limits and exploring the Pennsylvania and Reading Railroads’ design impact on the state and the regions between Missouri and New York State.

“21st century Philadelphians have a dual advantage in that they are served efficiently by a railroad infrastructure without the dirt and industrial sprawl that their 19th century predecessors took for granted,” says Laverty. “One hundred years out, we are still reaping the benefits of the investment in material and quality design that the railroads made in their passenger stations to serve as community hubs like Wayne Junction and the PBW train shed at Broad and Washington.”

Laying Tracks & Laying Foundations: Building for the Railroad, is on view at the Athenaeum of Philadelphia, 219 S. 6th Street, until May 12. The show is free and open to the general public. Click HERE for more information.

On April 28-29, the Athenaeum will present a two-day symposium, Engine of Change: Railroads in American Society. Discussions will include recent research on the history of American railroads and examining shifting perspectives. Register for the event HERE.