A Tradition Of Demolition At 3rd and Willing’s Alley 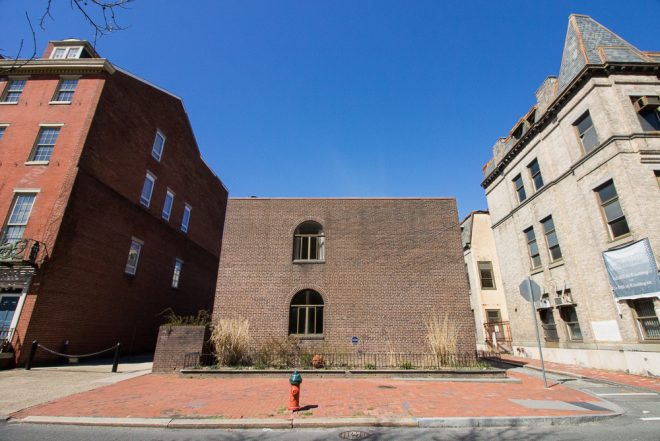 The future site of something bigger? The curious, two-story Irani House, on the former lot of the Willing Mansion and Pennsylvania Railroad’s old headquarters, was built in the mid-1970s for pioneering female pediatric orthopedist, Dr. Roshen Irani. | Photo: Michael Bixler

Some urban street corners remain intact for centuries, while others change shape over time. One would be hard-pressed to find a property in the city with more lost built history than the southwest corner of 3rd Street and Willing’s Alley. The lot’s journey, from a Colonial-era mansion, to Italianate office tower for the Pennsylvania Railroad, to a gas station, a playground, and, lastly, a two-story block of restrained Postmodernism is a tale indicative of Philadelphia’s unyielding habit of demolition for redevelopment.

Willing’s Alley was named after the first permanent building to occupy this property, the Willing Mansion, designed and built in 1745 by John Palmer for wealthy merchant Thomas Willing. The building’s layout was based on Willing’s family home in England. The Willing Mansion contributed to the establishment of a burgeoning neighborhood known as “The Hill” given how one had to climb two steep hills to reach it from the commercial district on the Delaware riverfront. 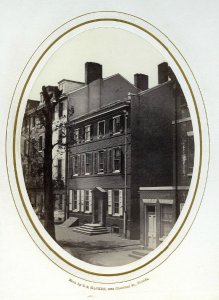 Thomas Willing, who would later become delegate to the Continental Congress and the first President of the Bank of the United States, married Anne McCall, granddaughter of Edward Shippen, the second mayor of Philadelphia. The couple had eight children. Willing’s second daughter, Elizabeth, was married in the mansion to Major William Jackson, aid-de-camp and private secretary of George Washington, in November 1795. The newly inaugurated President along with Alexander Hamilton and several other key figures of the Revolutionary War were in attendance.

After the Willing Family moved out, Dr. Thomas Dent Mutter, of Mutter Museum fame, used the mansion for his first office in the 1830s.

By the start of the mid-19th century, the neighborhood had changed. What were once the most elegant homes in the city were now mostly boarding houses, the Willing Mansion included.

On April 20th, 1856, the Pennsylvania Railroad Company purchased the Willing Mansion property to be razed for their new headquarters. The decision may have been influenced by a large fire at the Bingham Mansion (now the site of Bingham Court) earlier that year that heavily damaged several surrounding buildings. Locals lamented the demolition of the Willing Mansion, seen as a symbolic gesture, perhaps, of commercial industry erasing Philadelphia’s elegant 18th century landmarks in favor of profit margins and progress.

The PRR held a competition for the design of the new office building, but only two architects entered submissions; John Notman, most known for his design of the Athenaeum of Philadelphia, and Stephen Decatur Button, who would later go on to design the Arch Street Presbyterian Church and the gatehouse at Mount Moriah Cemetery. On August 30th, 1856, Button was chosen as the winner.

Button was set on making PRR’s new headquarters impressive. In addition to having a commanding height (for its time) and a highly ornate, Italianate façade, the new PRR office building would also be the first fireproof building constructed in the city. He employed a method using rolled iron I-beams, which just entered production in the United States two years earlier, for the floors and ceilings, with brick arches in-between. Concave plaster molds were then placed under the arches, almost like a modern drop ceiling with acoustical tiles. 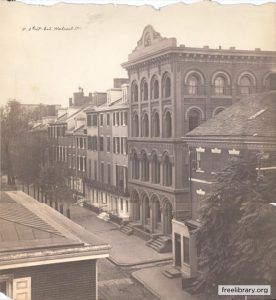 In September 1857 the Pennsylvania Railroad General Office Building opened. While the Panic of 1857 was driving other railroad companies out of business, PRR expanded by purchasing the entire transportation works of railroads and canals owned by the Commonwealth of Pennsylvania. The company continued to expand over the next 15 years. By 1871, the PRR was the largest privately-owned business in the world and a model for how to organize a large and complex corporation.

By the end of 1872, PRR moved to a new, much larger office building at the corner of 4th and Willing’s Alley, right behind their former General Office. The new building was also designed by Stephen Decatur Button and was lauded for its fireproof technology.

The Lehigh Valley Railroad, having acquired thousands of acres of coal lands and a number of new rail lines, purchased PRR’s old headquarters and used it for the company’s general offices. LVR continued to use the property after they relocated their main offices to Bethlehem, PA in the 1890s.

LVR suffered significant financial loss after the Wall Street Crash of 1929. The rail company moved out on July 31, 1938 and sold the old PRR headquarters to New York developer Hyman Fisch, who demolished it and built a gas station on the site the following year.

Fisch sold the gas station to the Salvation Army in 1945. The pumps were removed and lot was surrounded with a chainlink fence and barbed wire, and playground was built, part of the charitable organization’s Day Nursery in the old Westmoreland Building. The playground stayed in use until 1963, when preparations for I.M. Pei’s Bingham Court design began, which placed a pedestrian street through the old Willing Mansion property, leaving a vacant segment along one side. 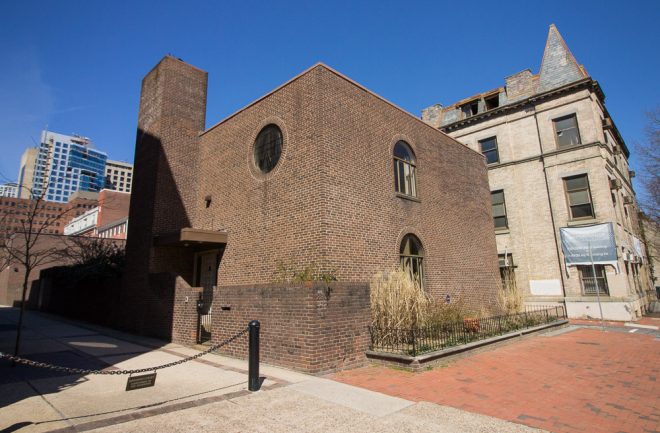 The Irani Home, viewed from the 3rd Street entrance to Bingham Court, could easily be mistaken for a PECO substation or an old city jail. | Photo: Michael Bixler

After Bingham Court was complete in 1967, the vacant property that remained alongside the complex was purchased by Dr. Roshen Irani in the mid 1970s for the construction of a custom-designed home. The Iran-born Dr. Irani was one of the first female pediatric orthopedists in the country and wrote well-known papers on treating leg fractures in children.

The Irani House was designed by architect Charles F. Kain’s Zenith Engineers, Inc. Dr. Irani lived the house until her death in 2007. The home was bequeathed to nearby Old St. Joseph’s Church, which now uses the building for office and meeting space.