A Powerhouse Of Footwork And Fitness On Delaware Ave

Party in the front, fitness in the back. When the Kerr Brothers Salt Company bought this old 19th century trolley power station in the 1950s they fitted the building’s stately entrance with a loading dock and converted the backend on Delaware Avenue into a main office entryway. A night club and a climbing gym have occupied the space for more than a decade. | Photos: Michael Bixler

The Delaware waterfront along the borders of Northern Liberties and Fishtown was once brimming with warehouses, ferry stations, and rows of sturdy wooden homes. Today, little remains of the area’s industrial and maritime legacy. Redevelopment pressures continue to threaten the old fabric of Delaware Avenue, much of which stood vacant for years, but not all. The old Roxxy dance club and Go Vertical rock climbing gym at 939 North Delaware Avenue, once the engine house of an old trolley power station, has stayed in continuous use for 122 years.

Kensington Iron & Steel, founded in 1845, was one of the most active iron rolling plants of the late 19th century. James Rowland, the company’s founder, was a successor to other iron companies that had operated in Philadelphia under the direction of the Rowland family since the 1700s. The Kensington Iron & Steel plant operated a number of piers on the Delaware River and ran a manufacturing complex that covered almost the entire area between the Cohonsink Canal (now Canal Street) and the Delaware River between Poplar and Laurel Streets.

Business at the steel plant boomed until 1890, when production came to a halt after James Rowland died of a stroke on March 28th of that year. The entire complex was auctioned off for $68,000 and subdivided into smaller properties that were sold again a few years later. One of these parcels, 940 North Delaware Avenue (950 N Penn Street today), was purchased by the Electric Traction Company. 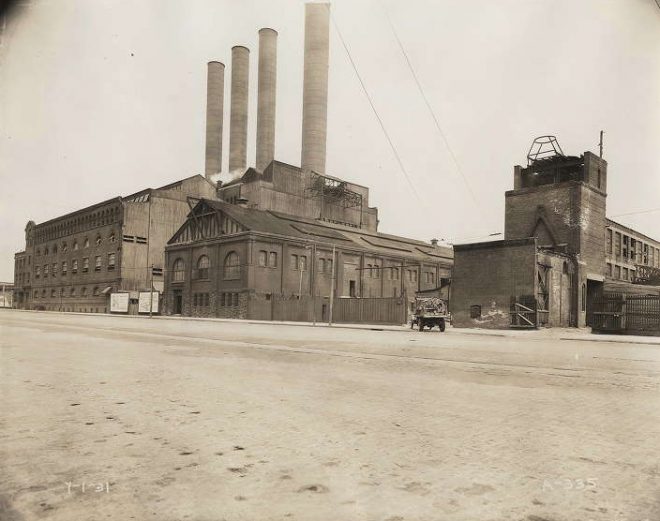 Electric Traction Company’s old engine house, at right, next to its four-stack successor, in 1931. | Source: Free Library of Philadelphia

In the early 1890s, the Electric Traction Company–along with the People’s Passenger Railway Company, Philadelphia Traction Company, and Heston, Mantua, and Fairmount Passenger Railway Company–ran the entire system of electric trolley lines in Philadelphia. The electrical needs of the ETC’s 130-mile line was demanding, causing the company to invest in innovative solutions to efficiently run their operation. In 1895, ETC finished their second power generating station, a technological marvel of its time.

The original form of the structure was comprised of two buildings–an engine house (the section still standing) and a slightly wider boiler room, which has since been demolished. Coal, straight from the company’s pier across the street, was loaded onto conveyor belts and ashes were hauled away in the same containers. The coal was distributed between two, 80-ton steel hoppers that, in turn, fed six large boilers. The boilers powered four 1,200 horsepower engines, each powering a separate 800 kilowatt generator, and one 350 horsepower engine that powered a 200 kilowatt generator. The water supply for the power station came from a 400-foot suction pipe that drew its source from the Delaware River. 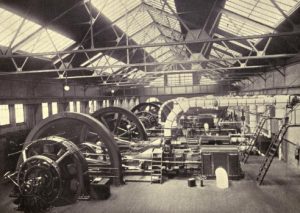 In 1897 the company merged with a handful of smaller local transit companies and became the Union Traction Company. Five years later the conglomerate was absorbed by the Philadelphia Rapid Transit Company, who were already projecting an increase of electrical needs amid planning of the Market Street Elevated (construction of the EL began in April 1904 and opened for service on March 4, 1907). To power the El and the rest PRT’s proposed subway lines, the company needed one large, central power plant. PRT purchased all of the land between ETC’s Delaware Station and Laurel Street. The company claimed that their new power station would be the largest in the world upon completion. They demolished the Boiler House of the old power station and began construction on a new section to provide electricity for their immediate needs.

Construction on the main section of the new plant began in 1913. Despite the bravado of their initial plans, the power station was only half of its originally proposed size, with only four stacks instead of eight. By default, the engine house of the old power station was not razed. In 1938, right after the elevated subway that once straddled Delaware Avenue ceased operations, the Philadelphia Transit Company, successor to the PRT, abandoned the power station. In 1942, it was demolished, and the station’s machinery was liquidated for 1,500 tons of steel that was given to the Federal Government for the war effort in Europe and the Pacific. A small segment of Ellen Street was added to the street grid in its place.

In 1940, Kerr Brothers Salt acquired the old Electric Traction Company engine house to use as a salt refinery, warehouse, and distribution point. By this time, Beach Street had become the wider and more accessible “new” Delaware Avenue and the “old” Delaware Avenue became North Penn Street. The salt company commissioned local architect Clarence Wunder to design the interior alterations and a new Delaware Avenue-facing façade that would conceal the 45-year-old building’s original use. Within the design, the back of the building became the front. 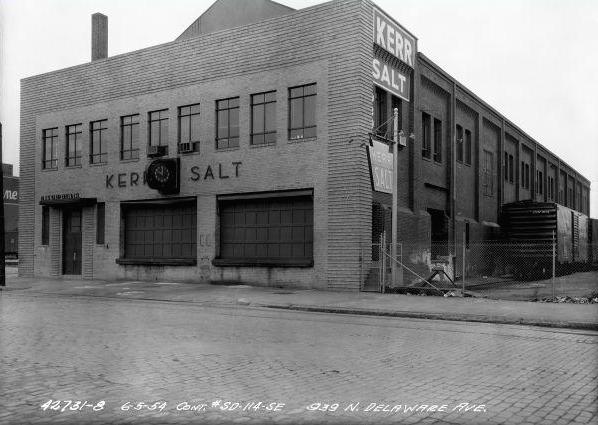 The old engine house was remodeled for the Kerr Salt Company as a refinery, warehouse, and distribution center. Photo taken in 1954. | Source: PhillyHistory.org

In the mid 1950s, the Morton Salt Company took over the converted engine room and used the building for salt refinement and distribution until the late 1970s. After a brief stint as a dry goods and housewares warehouse, the old power station building was acquired by real estate speculator Philip Bogatin, who used part of it as a warehouse and leased another section to the first of a long succession of night clubs, a leasing tradition that continues today. The old Kerr Salt parking lot next door was converted into an outdoor dance club. In 1999, Go Vertical, at the time the largest indoor climbing gym on the East Coast, opened on the Penn Street side of the building.

Bogatin died in 2007, and the old engine house was sold to its current owner in 2011 for approximately $1.9 million. Today, the night club space is occupied by B-side Complex (a rebranding of The Roxxy), Go Vertical still runs their climbing gym in the rear section, and the Bamboo Bar serves drinks al fresco the old Kerr Salt parking lot.