The Gallery: Finally The Destination Ed Bacon Hoped For? 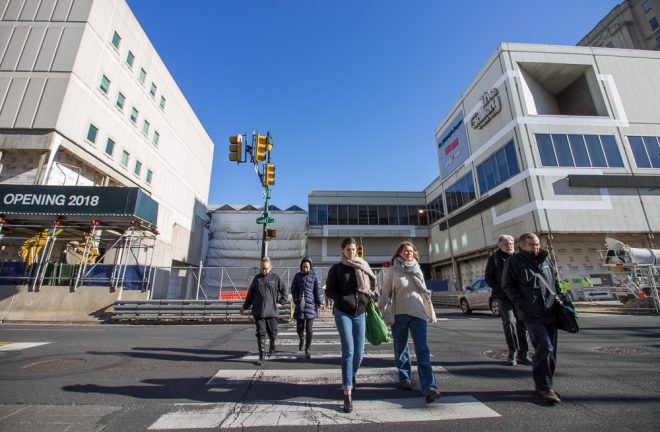 The old entrance of The Gallery at 9th and Market gets ready for a makeover. | Photo: Michael Bixler

The American shopping mall is, and always has been, a suburban idea. Although malls have existed in some shape for centuries—in the form of covered and pedestrianized streets and the like—we mostly have mid-century architect Victor Gruen to thank for the mall as we know it today.

Gruen’s archetypal shopping mall worked for a number of reasons, but it owed much of its success to the idea of a destination. In the suburbs, where buying almost anything requires a car, the mall became the dominant retail form because it didn’t require much additional driving beyond getting there and back. Department stores, boutiques, restaurants, even movie theaters were united under one roof and surrounded by free parking. Thus, the mall brought elements of the public and civic world of cities to the private and personal world of the suburbs. In fact, malls did this so well that they nearly rendered cities obsolete for many suburbanites.

Now, as the mall developer and manager Pennsylvania Real Estate Investment Trust (PREIT) and its partner Macerich, an outlet mall operator, complete the demolition of Philadelphia’s downtown mall, known as The Gallery, in order to transform it into the Fashion Outlets of Philadelphia (read Nathaniel Popkin’s 2015 analysis of PREIT’s plans HERE), it is worth revisiting city planner Edmund Bacon’s original concept for the downtown mall. Bacon realized above all else that in order for the mall to succeed, it would have to become a destination. Officials at PREIT and Macerich seem to understand this fundamental idea, and have, promisingly, used the term “destination” to describe their half-billion dollar-plus plan. 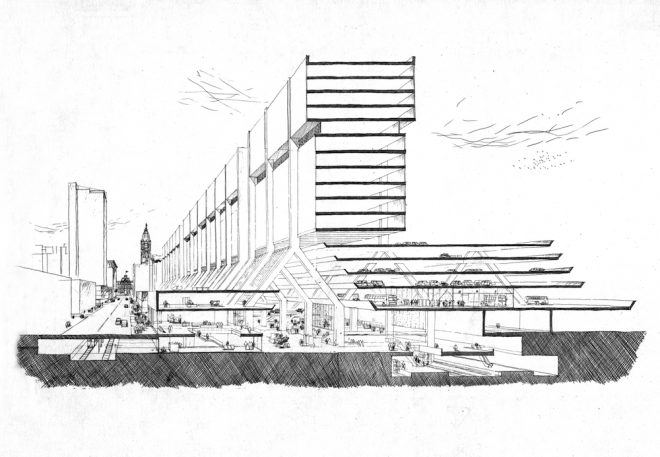 Drawing of an early proposal for the Gallery by architect Romaldo Giurgola. | Image courtesy of Mitchell/Giurgola Collection, The Architectural Archives, University of Pennsylvania

Ed Bacon saw Philadelphians moving to the suburbs and wondered whether there was anything that could be done about it. In plans for the far northeast and Eastwick, Bacon tried to mix elements of the city and the suburbs—to control the sprawl, in a sense. But his boldest idea came in the form of a combination mall and transportation center at what he called “Market East,” which was the crux of his plan for a revitalized Center City. Bacon saw this part of the city as a regional connector—a new hub for transit and shopping, and a new gateway to and from the city. In Form, Design, and the City, a presentation that Bacon originally made at the national conference of the American Institute of Architects in 1961, he frames Market East as the synthesis of all the projects he played a part in during his more than 10 years on the City Planning Commission. Bacon was hopeful for the impact the Market East project could have on visitors’ first impressions, calling it “a proper entrance to Center City.”

But if the mall is meant to bring culture and shopping to places without culture and shopping, then can it (and should it) work in cities? What happens when a mall, which is supposed to mimic downtown in places that lack downtowns, is placed in the middle of a real downtown in what was then the fourth largest city in America? Did Bacon have a good idea, or was his mall a lost cause from the start?

Given its surroundings, there are, and must be, fundamental differences between The Gallery and most successful suburban malls, and Bacon worked carefully to make sure that the mall did not simply mimic the suburban model. Some of those differences, however, hindered The Gallery’s success. It is downtown, making it less convenient for cars; it is not an isolated sea of retail, but rather surrounded by other shopping options close by; and perhaps most importantly, it is not a destination—shoppers typically did not come to Center City to patronize the mall before anything else. 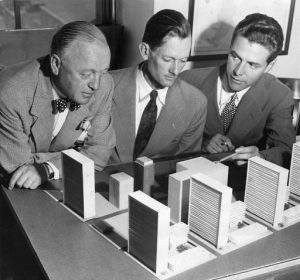 Earle Barber, chairman of the Philadelphia Redevelopment, Ed Bacon, and architect Vincent Kling in 1950 sizing up their options for Market Street once Broad Street Station’s “Chinese Wall” is removed. An early version of Penn Center is shown in the model. | Photo courtesy of the Special Collections Research Center, Temple University Libraries

Bacon thought that The Gallery would become a destination mostly by virtue of its location. Just east of City Hall, the land that was chosen for the project was perfectly situated for a regional transportation and retail hub. It was close to the then-unfinished I-676 (which itself was part of the same car-friendly transition of the city that, in Bacon’s blueprint, included the destination mall), adjacent to the city’s two commuter railroads and sat on top of the Market-Frankford subway line. Bacon hoped to create a separate platform for the subway, which, as he explained in Form, Design and the City, would “open into a lower level garden, connected by a shop-lined concourse with a commuter rail station to the north.” Here, he would link the Pennsylvania and Reading railroads with a new tunnel, and build a new bus terminal in a parking garage, which would include space for private vehicles, providing easy access to the highway, above the train station. He proposed wrapping the shopping mall around the parking garage, and adding retail spaces in the new train station—much as he had wished to do at Penn Center (another example of Bacon’s sophisticated planning that was compromised). Although Bacon supported separation of pedestrians from streets, he seemed to ultimately view The Gallery as a contributing piece of a complex and historic neighborhood that he hoped would achieve a new prominence as a regional destination for both urbanites and suburbanites.

However, during the fifteen years between his initial proposal (1962) and The Gallery as it was built (1977), many of Bacon’s best ideas were scrapped, eventually leading to the mall’s downfall. Where Bacon envisioned a (partially) open-air mall, The Gallery ended up being completely closed to the elements; where Bacon hoped to wrap the mall around a parking garage, and integrate it into the existing streets, The Gallery turned its back on the street, with large blank walls that gave it a fortress-like presence from the sidewalk. Instead of becoming the catchall for middle class and wealthy folks that were leaving the city in droves, it became a gateway to Center City for commuters and shoppers who arrived by subway. With its introverted design, its lack of some sort of anchor attraction (like, say a movie theater), and its scarcity of diverse retail and dining options, The Gallery struggled to become the destination Bacon hoped for simply because it was not exciting enough to attract and sustain a wide variety of visitors.

Bacon’s Vision and the Fashion Outlets of Philadelphia 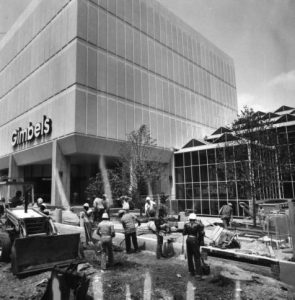 Curbs are installed in front of Gimbels at 9th and Market Street before the grand opening of The Gallery in 1977. | Photo courtesy of Special Collections Research Center, Temple University Libraries

Whether or not The Gallery can ever be a success may be largely determined by how much the mall’s renovation retroactively achieves Bacon’s original vision, which recognized the need to make the mall into a regional shopping hub.

There are some interesting parallels between the new plans and Bacon’s early ideas. Most of them involve making The Gallery and Fashion Outlets a place where people need and want to go. Bacon’s original design was dazzling and hoped to impress urbanites and suburbanites alike by creating new life in an area that had long been in decline. The new design (if it does, in fact, turn out the way the renderings portray and it may not) will make the mall much more legible as an upscale place and more noticeable through exaggerated signage, crucial to creating a destination. Several new renderings show large, new storefront windows that will make the mall more appealing from the ground level, which would not only help to make the surrounding area more active and lively, but would also help The Gallery function more like an urban shopping district.

Likewise, the new plan aims to make The Gallery a destination through the stores it attracts. Bacon’s original plan called for uninterrupted esplanades of shopping above the street, which would have used skybridges over the street to connect the five prominent department stores still then occupying legacy buildings on Market Street. Bacon hoped this would make these stores function like one unit, making shopping in the area much more convenient, like shopping in the suburbs. Although few details have been released, PREIT officials, including CEO Joseph Coradino, have emphasized that the mall will attract “destination retailers.” Exactly what stores will call the new mall home is yet to be seen. If PREIT officials are serious about making the Fashion Outlets of Philadelphia a legitimate regional competitor, they will have to at least live up to the hype they have tried to create around the retailers. If the designs do not come out as rendered, the mall can still be reinvented through its stores. If the stores do not come out as promised, the mall is skating on thin ice. The new Gallery as a destination can be done—it just needs to be properly executed in order to work. It needs to be executed like Bacon would have wanted. 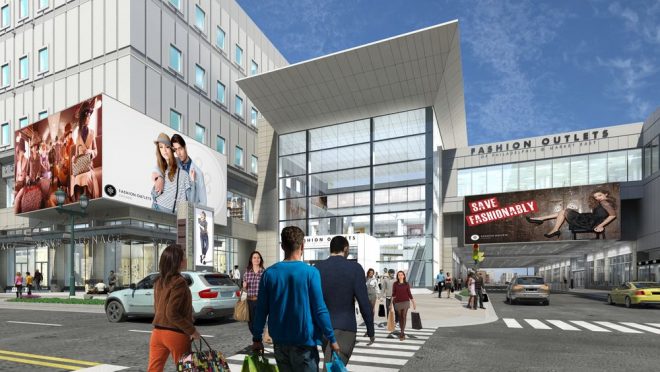 PREIT’s redesign proposal of 9th and Market entrance as of December 2016. | Rendering: Macerich

Whether the new vision will come true is, at the moment, hard to tell. If the redesign does turn out as rendered, The Gallery will come closer to achieving Bacon’s original vision by successfully melding the urban and suburban concepts that Bacon held as key to the mall’s success. By taking advantage of Market East’s distinctively urban qualities—its walkability, transit access, and density—the Fashion Outlets could become the regional destination The Gallery was planned to be.

With so much public money–$150 million—hanging on this project, the city and state cannot afford to give up on Bacon’s key principles this time around. There are many questions that will be answered in the coming months and years as the renovations are completed and new tenants fill out the space, but the most interesting question is whether, in its new incarnation, The Gallery will become the destination that it needs to be in order to thrive. If all goes according to plan, similar to what Bacon would have wanted, the answer could very well be yes, and the city’s money would be well spent. 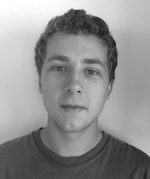 Chris Giuliano Chris Giuliano is a New Jersey native with an interest in city planning and philosophy. He is particularly interested in how the history of a city can be understood through its design, and can frequently be seen exploring with a camera and a keen eye.