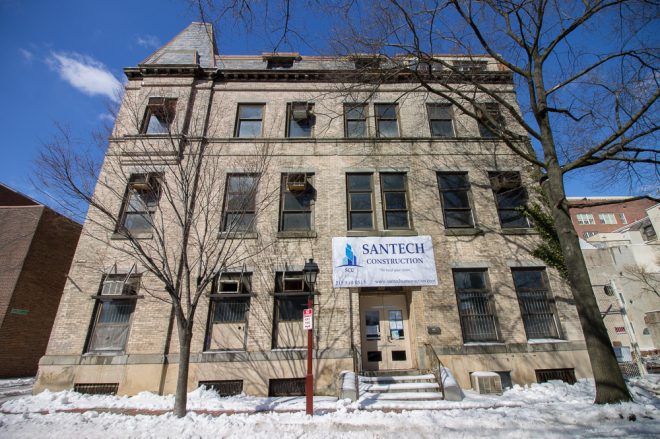 The former offices of Westmoreland Coal Company was used by the Salvation Army as day care facility dating back to the Great Depression. The building has sat vacant since it was sold in 2005. | Photo: Michael Bixler

After 12 years of stalled plans and vacancy, conversion of the former Westmoreland Coal Company headquarters for residential use is finally taking shape. Dominating the corner of 3rd Street and Willing’s Alley since the late 1800s, the old office building is largely known for its use by the Salvation Army for a day care facility since the Great Depression. The building was listed on the local historic register in 1999, and lends distinction, density, and a dash of mystery to a block lined with Society Hill town homes.

The Days of Black Diamonds

In 1852, the Pennsylvania Railroad completed the rail connection between Pittsburgh and Philadelphia. This allowed high quality bituminous coal, used to make coal gas, to be shipped to gasworks along the East Coast. The Westmoreland Coal Company of Irwin, PA incorporated in 1854, became the first and biggest miner of the Pittsburgh Coal Seam of bituminous coal that ran through Westmoreland County. In 1857, Edward C. Biddle signed on as president of the company.

Biddle was no slouch. He was a member of the influential Philadephia Biddle family who had established himself as one of the city’s biggest publishers. He was also the director of the Philadelphia public school system. His interest in bituminous coal may have stemmed from his position as director of the North Central Railway, a railroad that connected coal country to East Coast cities. 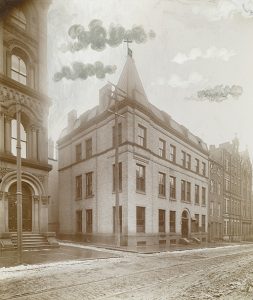 The Westmoreland Building looks diminutive compared to the old Pennsylvania Railroad offices to the left, which was demolished in 1938. Date unknown. | Source: Free Library

Biddle ran Westmoreland Coal and the rest of his empire out of a large house that was located at 230 South 3rd Street, now the site of 222-224 South 3rd Street. Shortly before the Centennial  Exposition of 1876, Westmoreland Coal’s old headquarters was razed and replaced by a 14,000 square foot, four-story modern office building with a white enameled brick façade. While the Westmoreland building’s design seems out of place today, several other attractive 19th century specimens shared the block. The old Pennsylvania Railroad office building, demolished in 1938, towered above Biddle’s office just across Wiling’s Alley.

The Westmoreland Building was also used by other coal, oil, and gas-related ventures. The offices of Morris, Tasker, and Company, a gas pipe manufacturer, was a long-term tenant. Other occupants not related to fossil fuel, like the Zoological Society of Philadelphia and the Spanish Consulate, once had offices there as well.

Over the next few decades Westmoreland Coal acquired more coal mines, acquired large areas of undeveloped coal land in Virginia, and adapted their practices with evolving technology. The company began to outgrow the Westmoreland building by the 1920s. They moved to new offices in the Lewis Building at 1425 Locust Street (now Aria Condo) in 1927. In 1929, the company was managed by the Stonega Coke & Coal Company of Virginia, whose founder was also the majority shareholder of Westmoreland. Later that year they became one of the first companies to move into the brand new Fidelity-Philadelphia Trust Building (often referred to as the Trading Places building) and stayed there until relocating to Colorado in 1995. Westmoreland Coal Company still operates today.

The Dawn of Day Care

After the Wall Street Crash of 1929, many stay-at-home mothers entered the workforce to supplement family income. One problem created by this was that children were left at home by themselves, with some roaming the streets and getting into mischief. To address the issue, the Salvation Army expanded their day nurseries (what we now call day care) in a number of urban centers, and the old Westmoreland Building became the Salvation Army Settlement and Day Nursery. A speech made at a meeting of the city’s Women’s Auxiliary unit in 1933 claimed that Philadelphia was ahead of all other U.S. cities in the proliferation of day nurseries, with one location serving an estimated 54,000 children. The speech also claimed that pupils at day nurseries did better in school, had better personalities, and rarely found themselves in the Juvenile Court and House of Detention at 22nd and Arch.

Administrative offices were on the first floor of the building, while classrooms were on the second and third, and a caretaker’s apartment on the fourth.

In November 1943, the Salvation Army acquired an old rowhouse at 220 South 3rd and demolished it a year later to created a small yard along the side of the building. The property did not reach its current size until 1960 when the Salvation Army bought the old offices of the Royal Insurance Company and the J.H. Moore Company, two beautiful 19th century commercial structures. Both were demolished and replaced with a parking lot, a small above-ground swimming pool, two separate playgrounds, and a two-story “play shelter.” 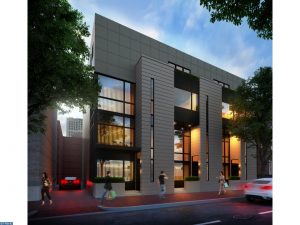 More alterations came in 1977, this time under the direction of Ewing Cole, one of the hottest architectural firms in the city at the time. Their renovations moved the kitchen from the third floor to the basement, turned the above-ground pool into a wading/spray pool, and included an outdoor deck over the play shelter that was never completed.

After these alterations, a new dedication stone was installed into the façade honoring the overhauled nursery with 1977 as the date. The Salvation Army used the building until they sold it to SLKRC Realty in 2005 for $4 million. The old Westmoreland Building and associated properties would go on to sit vacant for the next 12 years. In 2011, the properties were listed for sale for $5 million and included plans for adapting the old building for residential use with 14 apartments and eight large townhomes. The asking price dropped to $3.95 million a year later.

Despite the building’s beauty, the size of the associated lots, and the outstanding location, the properties could not find a buyer. As of last December it appears that SLKRC Realty has partnered with another group in order to finally develop the properties. The new plans are four large homes to be built in the old Salvation Army parking/playground area and the conversion of the Westmoreland Building into 14 residences. A pre-construction listing for one of the homes, 212 South 3rd Street, features 5,103 square feet for $2.68 million.