Despite consistent design principles and shared ideological underpinnings, some historians portray the Philadelphia School as a loose coalition of architects without unifying features other than physical proximity and shared academic pedigree. Jason Tang and Izzy Kronblatt, the curators of the exhibition, says that it is time to correct this faulty perception by giving clear definition to the school’s legacy with renewed dialogue.

“We want people to take the Philadelphia School as a movement seriously, rather than just looking at Kahn or VSBA in isolation,” says Tang. “We hope to introduce the view that actually Philadelphia School architects can be understood as having a set of family resemblances, shared ideas, and approaches and tools.” 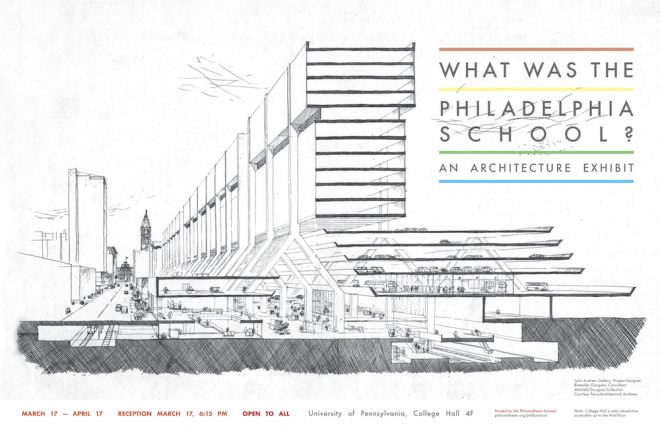 The exhibit features 50 drawings, paintings, and models of work by Louis Kahn, Robert Venturi, Denise Scott Brown, and Romaldo Giurgola, among others. The co-creators of the exhibit also focus on lesser known buildings to explore the school’s legacy. Work by Scott Erdy and other contemporary projects influenced by the Philadelphia School are featured in the exhibit as well.

“In our telling, Philadelphia School architects saw buildings as complex systems of many parts designed to accomplish a multitude of different things all at once. An interior plan might be understood as a city map, a facade as both a symbolic image and housing for mechanical equipment,” says Tang. “For these architects, the many tensions inherent in making a building work and making it fit in are precisely what make a building interesting. Beauty arises not from blank slate creation, but from laying bare the complexity of the design problem itself–and, of course, the effectiveness of the solution.”

“What Was the Philadelphia School? An Architectural Exhibit” opens to the public tonight with a reception at 6:15PM at The Art Gallery in Philomathean Hall on the 4th floor of College Hall. The exhibition runs March 17 – April 17.