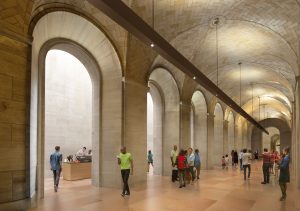 Declaring he was ready to “get that bulldozer and go through that wall,” architect Frank Gehry this morning helped break ground on the $196 million “Core Project,” the first major renovation of the Philadelphia Museum of Art since its opening in 1928. The project is part of a $525 million dollar campaign that museum officials say is 62 percent funded, mostly through private donations.

The ceremony took place in the 640-foot-long vaulted corridor that runs along the neoclassical museum’s north-south axis and that has been closed to the public for about fifty years. One of the main goals of the renovation, says Gehry, who was hired to begin the museum’s master plan in 2006, is to recapture the the classical geometry of the building following its X and Y axis. This geometry had been obfuscated over the years by various interventions. The most obtrusive of those interventions was the Van Pelt Auditorium, which museum president Gail Harrity said has been demolished. The wall Gehry was excited to break through this morning, the west wall of the auditorium, supports Marc Chagall’s iconic 1942 work A Wheatfield on a Summer’s Afternoon, which has greeted museum visitors in the western entrance for decades. Removing the wall is part of the Core Project’s plan to create 67,000 square feet of public space and 23,000 square feet of new galleries, particularly for American and contemporary art. 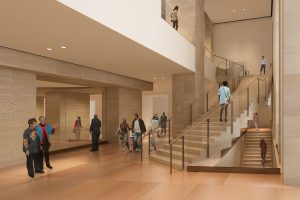 After the Chagall wall has been broken through | Image: Gehry Partners

A new public entrance on the museum’s north side will lead visitors down the long vaulted hallway, which will be filled with light, as the original architects, Julian Abele and Horrace Trumbauer, intended, as well as cafes and casual sitting areas.

Gehry said he was first recruited to work on the PMA by Harrity, the project director for the Guggenheim Museum Bilbao, in the post-industrial city of Bilbao, in the north of Spain. That museum, completed in late 1997, is credited with turning around the city of Bilbao. Could Gehry do something similarly transformative in Philadelphia? she asked him then. “Hell yes!” he said this morning he told her, and then added, “it’s going to be an amazing museum.”

Speaking at the ceremony, Philadelphia Mayor Jim Kenney mentioned that the museum has the capacity to bring together people from “every corner of the city, nation, and the world” to learn from each other and exchange ideas “despite the stupidity” of Trump Administration policies to cut Federal funding and immigration. Gehry reinforced Kenney’s remark. “I really believe people speak to each other through the arts more clearly. That’s the role of this place,” he said.

Restoration of the museum’s vaulted walkway will be complete in 2019, and the new public spaces and galleries the year following.