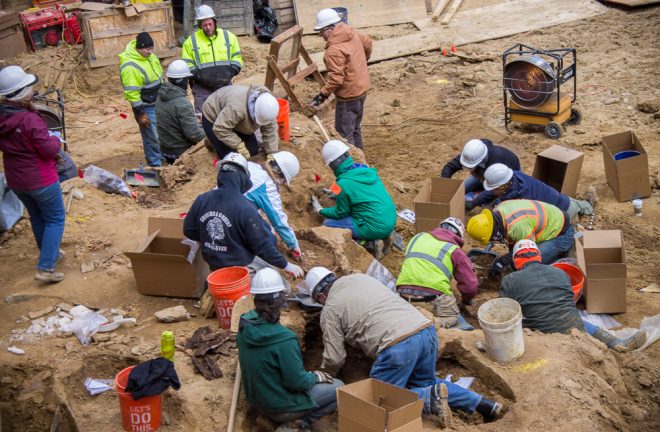 A small army of volunteers led by the Mütter Institute worked against the clock on Saturday morning to salvage human remains and artifacts from First Baptist Church Burial Ground at 2nd and Arch Streets. The site is currently being prepped for construction by PMC Properties. | Photo: Michael Bixler

Last week, 77 intact coffins, along with numerous other human remains and artifacts, were uncovered on a construction site at 218 Arch Street. An emergency excavation by volunteers from the Mütter Institute followed. The delayed intervention stems from a discovery that occurred last September when real estate developer PMC Properties came across a cache of bones. Archaeologists posited that the bones were likely remains from First Baptist Church Burial Ground, a cemetery that dates back to 1707. In November, the Philadelphia Inquirer published a story on the discovery and the difficulty in determining who was responsible for their preservation and reinterment.

According to Douglas Mooney, president of the Philadelphia Archaeological Forum (PAF), a nonprofit dedicated to the preservation and protection of Philadelphia’s archeological resources, jurisdiction over the bones fell to the City’s Orphan’s Court Division (‘orphan’ here meaning an entity lacking protection, not a child without parents). However, the Orphan’s Court was not petitioned. Due to time constraints imposed by the developer, it was the Mütter Institute who stepped in and organized a salvage effort which took place last week. The excavation was assisted by an assortment of volunteers from different universities and institutions along the East Coast.

Kimberlee Moran, associate teaching professor and Director of Forensics at Rutgers-Camden helped to carry out the excavation at 218 Arch Street. She described the difference between a proper archaeological investigation and salvage operation like the one that took place on the site.

This documentation includes creating a grid to map excavation in three-dimensional space as well as the use of total stations. Commonly understood as the tripod people in orange vests use for road surveying, total stations measure slope distances between points. Soil is taken out in horizontal layers so that it is removed evenly, giving the excavator more control over where things are in 3D space. GPS points are created so that sites can be digitally recreated.

“Unfortunately, this was time the developer wasn’t interested in giving us,” said Moran. “They just wanted those bones removed. The goal was to get stuff out the ground. We managed to get some photography in there. We did our best within the parameters that we were given.”

Douglas Mooney, though not on site during the excavation, was critical of the time restrictions handed down by the developer and the breach of protocol. He called the parameters provided for excavation “a disgrace.”

Mooney also criticized the fact that there is not, at present, a qualified archeologist on the staff of the Philadelphia Historical Commission. He believes if there were, the Historical Commission would have been more likely to launch an investigation before construction began.

“Something needs to be done so that, in the future, we know about these burials before construction even starts,” said Mooney, “and if burials are exhumed during construction there [needs to be] a procedure in place that everybody knows about and is followed.” 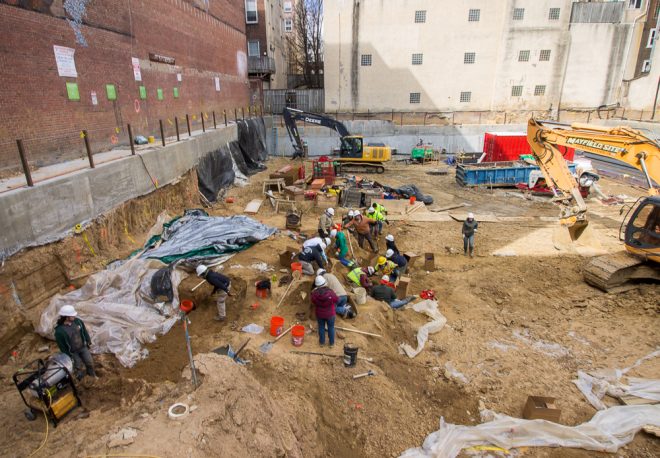 Without a petition filed with the the City’s Orphan’s Court Division, owners of the site, PMC Properties, currently have full jurisdiction over the former burial ground. The developer gave volunteers roughly a week to save what they could find. | Photo: Michael Bixler

It should be made clear, however, that the excavation was by no means a loss to the scientific community. A plethora of historic material (remains, coffins, artifacts, bits of clothing) with be transferred to the Forensic-Osteopathy lab at Rutgers-Camden for further study.

Anna Dhody, director of the Mütter Institute, the organization spearheading this research, said that the first step is a detailed inventory and analysis of all skeletal remains. This requires an internal excavation of the 77 intact coffins. Then the remains will be cleaned, photographed, laid out in anatomical order, and documented. This helps to create a biological profile which can tell us an incredible amount of information about the individual in question.

“A skeleton is like a book,” said Dhody. “From [the biological profile], you can assess the individual’s age, race, sex, stature, and any traumas or pathologies associated with that skeleton. This really gives you a really amazing insight into the life and death of this individual. Did they have proper nutrition growing up? When they were younger did they get enough to eat? Did they have an significant injuries that they recovered from? Did they have any diseases? Did they have a certain occupation that was very strenuous or left certain markings on their skeleton? These are just a few of the things that you can tell about an individual by looking at their skeleton.”

Many types of analyses are available to the archeologists who will study the remains, from dendrochronology (scientific method of dating tree rings) on the wood of the coffins, to isotope analysis on the teeth of the individuals, to microscopic hair analysis.

“We’re in the process of applying for a lot of emergency grants so that we can really take this to the highest level of analysis and really maximize this truly unique opportunity,” said Moran.

In spite of the unorthodox nature of the excavation due to the inappropriate time frame, Dhody remained positive about the experience. She said that, on any given day, there were more than enough volunteers on site.

“The fact that we were able to mobilize these individuals speaks to how fascinated people are and how committed they are to working on projects like this,” said Dhody. “It was very, very heartening and I can’t thank our volunteers enough. It was just wonderful.”