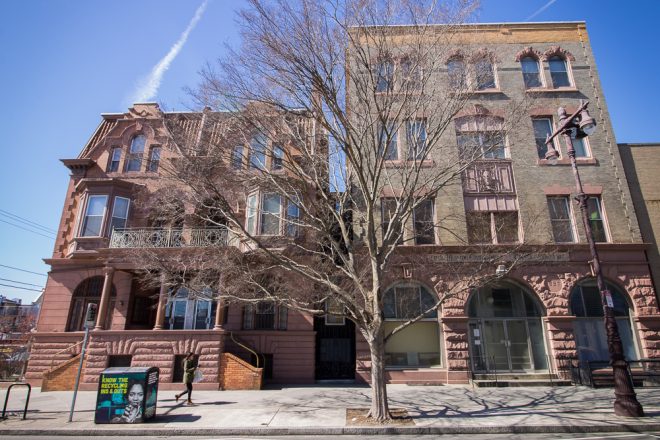 Father Divine’s first crack at the hotel business was inside this former mansion and office building at Broad and Catherine. He would later take what he learned up to North Broad and establish the iconic Divine Lorraine. | Photo: Michael Bixler

The Divine Lorraine has gone from an urban explorer’s blighted paradise to a beacon of hope on North Broad Street in a little over three years since its $44 million in renovations began in earnest. Developer Eric Blumenfeld has successfully transformed this long-standing “lady in waiting” into an emblem of the city’s recent burst of redevelopment and determined renewal. Decades of graffiti have been removed from the façade and the old Divine Lorraine sign on the roof graces the North Philly sky one again with a warm, red glow. The old hotel now sparkles with optimism and become so popular in recent years that it now has its own collection of apparel and household goods–Chuck Taylor sneakers, jean jackets, and even scented candles–emblazoned with a Divine Lorraine logo. However, as phoenix-like and fashionable as the building has become, it wouldn’t be here today if it weren’t for the original Divine Hotel on South Broad Street.

At the turn of the 20th century, Philadelphia’s population was skyrocketing and there was not enough housing to satisfy the need. Developers like D.B. McConnell and John McClatchy amassed fortunes building homes for the city’s new blue-collar workers and middle class residents. Among the most prolific builders was Charles B. Prettyman, whose namesake building still stands on the 700 block of South Broad Street.

Prettyman, a Delaware native, moved to Philadelphia in 1887. He built hundreds of row houses in South and Southwest Philadelphia and a slew of low-slung apartment buildings in West Philadelphia. Prettyman was also the developer behind the 400-room Royal Palace Hotel in Atlantic City. In 1889, Prettyman built a mansion for himself at the northwest corner of Broad and Catharine Streets, part of a small movement of wealthy families building large homes along this stretch.

In 1897, Prettyman eliminated his daily commute to company headquarters in the Betz Building at Broad Street and Penn Square and built a new office right next to his mansion. The building’s unknown architect placed a stone arcade at street level with tawny bricks and more stone embellishments moving up the façade. A metal relief with a “P” for Prettyman fills the space between the central windows on the second and third floors, with “Prettyman Building” emblazoned near the roofline. An ornate, metal cornice has long since been removed. The property was constructed in an L-shaped with a small section that reaches out behind Prettyman’s house and faces Catharine Street.

The building buzzed with business when it opened, much like mixed-use properties popping up all over the city today. It held offices on the upper floors for insurance companies, building associations, a printer, and Prettyman’s own development company. On the lower floors there were storefronts facing Broad Street and a meeting hall (sometimes called Prettyman’s Hall) used by sa number of organizations like the Independent Order of Redmen, the Independent Order Brith Abraham, the Betsy Ross Ladies Auxiliary and several labor unions. The section facing Catherine Street held apartments.

In the mid 1920s, the Osage Tribe #113 of the Independent Order of Redmen took over the Prettyman’s Building and the former mansion on the corner, which had been in use as a hotel since 1905. The fraternal organization, ironically made up of white, middle class men with stereotypical notions of Native American romanticism, converted the properties into one large, 93-room “wigwam” or lodge. In the retail space they operated Osage Pharmacy.

In 1939, the building was acquired by followers of the International Peace Mission Movement and was converted into the Divine Hotel. The dedication and opening of the new hotel was celebrated by a two-day event, the Mammoth Mass Meeting, on October 26th and 27th, 1940. The celebration started at the old Broad Street Station and paraded all the way down to Broad and Catharine, where a huge feast was served. Reverend Major Jealous Divine, aka Father Divine, made a speech describing that the hotel and dining room as “a sample and as an example for all humanity.”

The mission of Father Divine’s new hotel was to be modern and elegant, while also being affordable. Meals were served in the dining room for 15 cents. Rooms were available for 50 cents a night or two dollars a week. Father Divine prohibited tipping in any of his establishments. Although the Brigantine Hotel is often credited as the first one to be run by the movement, the Divine Hotel predates it by one year. 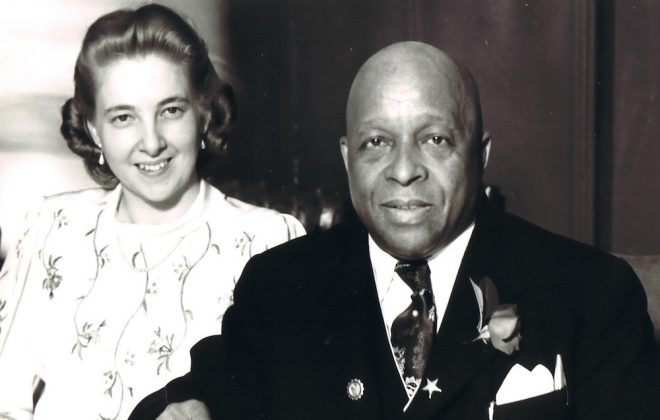 The hotel didn’t last very long, but served as a model for the later hotels created by the Peace Mission Movement, most notably the Divine Lorraine Hotel. The old Prettyman Building and associated homes then became the Circle Mission Church Home and Training School, one of three churches established to solidify Divine’s movement as a legitimate church and not the cult that it was often described as in the press as.

In July 1942, Father Divine, escaping from legal troubles in New York, moved into the combined 764-772 South Broad buildings and made it the movement’s official headquarters. The whole property was completely renovated and rebuilt. The kitchens and dining room were upgraded to serve more visitors, a self-service elevator was installed, and residential accommodations were made more appropriate for long-term visitors, like leaders of Peace Mission Movement outposts in other countries. 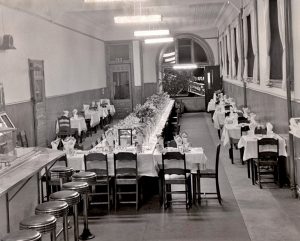 Father Divine would proclaim edicts from his new headquarters, most notably on October 9th, 1946 when he asked the U.N. to accept Philadelphia as capital of the world. Daily Holy Communion banquets were held, classes in a variety of subjects were taught in the classrooms, and business owners held meetings there.

The old Prettyman complex has been the headquarters of the movement ever since, athough Father Divine would eventually move to the Woodmont estate in Gladwyne. Over the decades after Father Divine’s death in 1965, the Peace Mission Movement continued on under the guidance of Mother Divine, his widow. She carried the movement into the late 20th century, bringing it through social change and resisting a hostile takeover by Jim Jones and the People’s Temple.

Today, the Peace Mission Movement is a much smaller organization, but it is still active. The Prettyman Buildng still holds the church’s library, which features Father and Mother Divine’s sermons, letters, and interviews. Holy Communion Banquets and classes still take place there.