Archeologists Dish Up Dirt On Philly History Under I-95 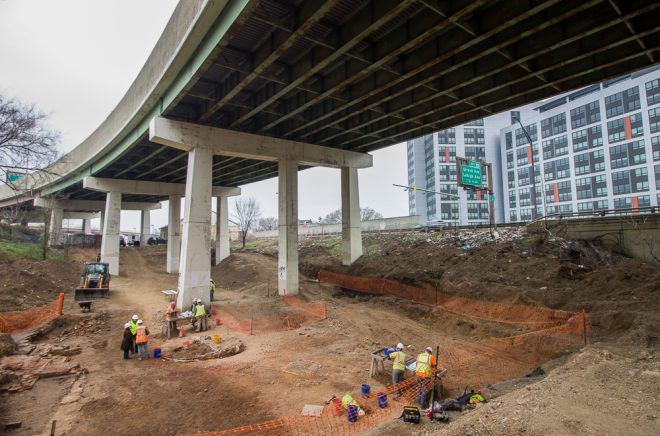 Earlier this month, in the course of digging the foundation for a new apartment building on Arch Street in Old City, construction workers uncovered the human remains of more than 100 bodies in a burial ground that dates back to the early 18th century. For the public, the discovery was shocking. Real estate developer PMC Properties had been aware of the former First Baptist Church Burial Ground since finding bones on the site last September. Yet, determining who was responsible for the reinterment of the remains was met with confusion and inaction. An emergency, seven-day excavation led by the Mütter Institute two weeks ago to recover coffins, remains, and other artifacts sounded a familiar alarm: Why, in this World Heritage City, is so much of Philadelphia’s built history not surveyed, mapped, or catalogued, let alone protected?

At the same time, just a few blocks away, archaeologists were digging away in centuries-old privies, collecting information about the day-to-day life of the city’s forebears. This excavation, however, was required by law as PennDOT redesigns and replaces long stretches of I-95. Mandated by the National Historic Preservation Act of 1966, big infrastructure projects are required to pay for archaeological exploration before it can do any major earth-moving operations.

So far, the Digging I-95 project hasn’t uncovered anything as startling as a bevy of skulls, but that is not the goal of this excavation. Archaeology is particularly good at evoking the mundane, day-to-day life of generations past. This is exactly what Doug Mooney, senior archaeologist with AECOM, the engineering firm overseeing the I-95 project, and a small cadre of archeologists are examining there. Still, while the Digging I-95 excavation hasn’t rocked local headlines with sensational findings yet, uncovering over 5,000 years of local history has specialists in certain academic circles electrified.

Notes from the Underground

I met Doug Mooney and George Cress, another senior archaeologist with AECOM, on an overcast morning in early March at the corner of 2nd and Race. To get to the nearby excavation site we had to walk down the expressway on-ramp, where there is no sidewalk, climb over a big pile of dirt, and slip through a gap in a fence. In the ditch below there were half a dozen archaeologists digging in privies. A folding table was set up showcasing an old belt buckle from an immigrant soldier who fought in the Battle of Inkerman during the Crimean War, a porcelain doll head, and other standout finds that had been pulled from that site and others further north, where much of the highway reconstruction work has already been complete. 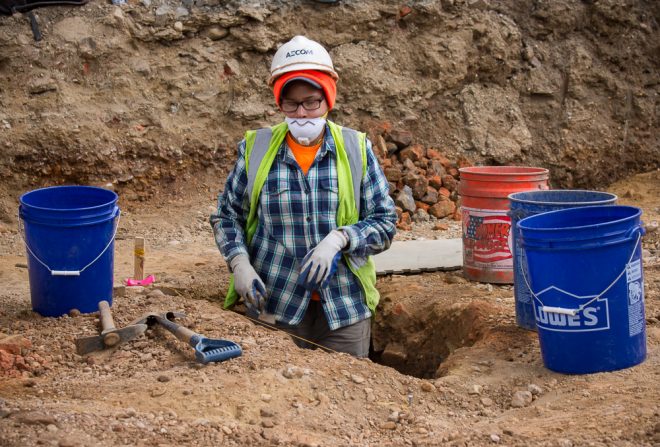 An archaeologist excavates an 18th century privy while traffic on the Delaware Expressway rumbles above. | Photo: Michael Bixler

“Privies are great sources of artifacts,” said Mooney. “It’s the outhouse, the bathroom, but it’s also, in the time before Philadelphia had citywide trash pickup, where you deposited all your household trash…broken plates, bottles, remains from the meals you ate. If we’re lucky enough to find a privy that wasn’t cleaned out before it was backfilled, it’s a great source of artifacts.”

In Port Richmond, at one of the previously excavated sites, workers unearthed a trove of industrial artifacts from the former Dyottville Glass Works, which operated for most of the 19th and early 20th century. The findings are notable not just because of what they reveal about the glass works itself, but because of how they proliferated out into the surrounding community. The objects they were finding—little one-offs for household use made from the same stuff that Dyottville was using for mass production—suggested that many of the workers lived in the direct vicinity of the factory and were making glassware for their homes and to sell in stores.

“They were using my research trying to learn about the area,” said Mary Mills, a glass specialist at AECOM and former manager of education programs at the Corning Museum of Glass. “When I came down and actually saw the Dyottville dig I was just beside myself. I mean, they could probably see me vibrating.” 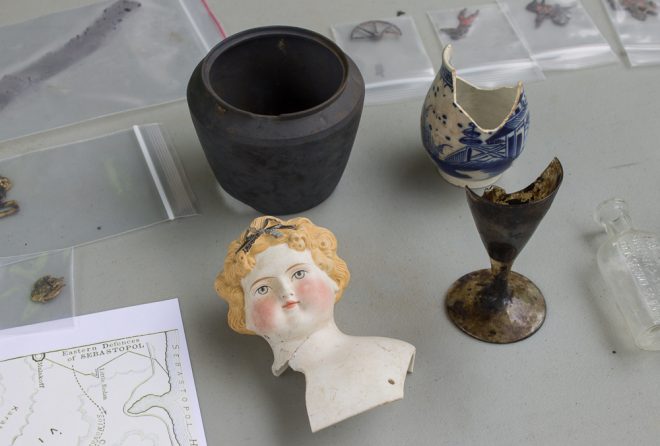 A porcelain doll head from Germany, an assortment of Colonial-era toys, and other centuries-old artifacts have been uncovered within the Old City excavation site. All findings are sent to AECOM’s archaeological laboratory in Burlington, New Jersey for processing, analysis, and conservation. | Photo: Michael Bixler

The findings were a revelation, and the Dyottville excavation was featured in February’s issue of Archaeology, the magazine of the Archaeological Institute of America. Those artifacts, and others uncovered in the course of the Digging I-95 work, were also displayed in an exhibit at the Wheaton Arts and Cultural Center in New Jersey last year.

“Glassblowing has basically been the same since the Romans developed it in 50 B.C.,” said Mills. “It’s very easy to reproduce something that looks 100 years old. That’s one of the challenges. So when you find something in an archaeological context, you don’t have to worry about whether it’s a fake early production. That’s what people get so excited about. The glass community—people are just jumping up and down.”

The types of discoveries being made in the course of the Digging I-95 project, which began in 2001 (field excavations started in late 2007), and won’t conclude for several more years, more or less mirror the history of the city, said Mooney. The artifacts in and around Old City are—you guessed it—older. The stuff being unearthed to the north, where smaller settlements cropped up later and weren’t incorporated into the city until the 1850s, is decades younger. In some cases, the project is uncovering Native American artifacts that date back as much as 9,000 years. 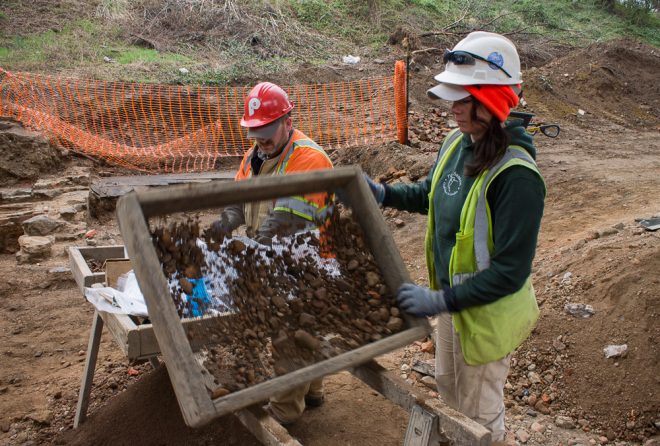 “The work that’s being done on this project and others here in Philadelphia is really rewriting what people think about what can be preserved in this dense urban environment,” said Mooney as tractor trailers whizzed by 50 feet above his head.

“Think about the buildings that have been going up and are torn down, the amount of disturbance that goes into making a 300-year-old-plus city. How in the heck can something as fragile as a Native American site be preserved in that kind of situation? What we’re finding is that even in the most densely populated urban core here in Philadelphia, there are small little sections where the original ground surface is still preserved completely intact.”

The notion of archaeologists using public money to examine 300-year-old toilets might make some tax payers cringe, but the Digging I-95 project has been met with more praise than criticism. According to Catherine Spohn, an archaeologist with PennDOT, the Department has received mostly positive feedback about the excavation work under the highway, which she said typically accounts for two to three percent of the overall project cost. Spohn says that neighbors in Port Richmond have taken a particularly keen interest in their findings. “We (PennDOT) get enough negative responses as it is so something positive is really good,” she said. 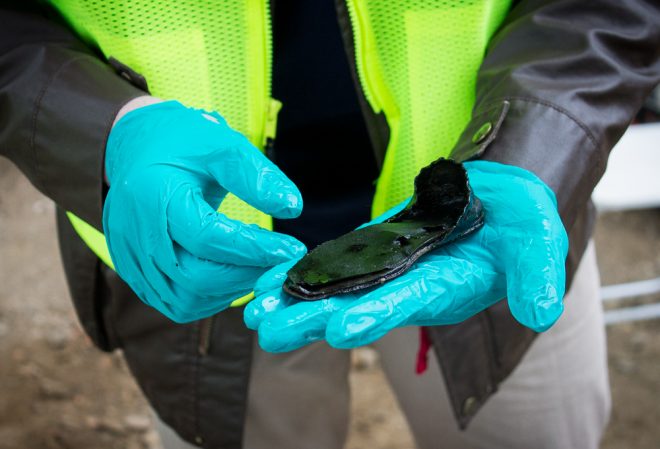 A leather child’s shoe from the early 1700s was recently uncovered by I-95 archeologists. | Photo: Michael Bixler

Nina Versaggi, director of the Public Archaeology Facility at Binghamton University, says she encounters people who are skeptical of the cultural resource management field all of the time. “It depends on how the economy’s going and how people are feeling. So, if people are feeling generous, then they think more carefully about this being something of interest to them and of interest to the nation.”

It would take more than one angry state legislator to bring the work to a halt, Versaggi said, but every time the White House changes hands the whole CRM industry begins to worry about what might happen to the federal law. “Some people view this as a frill,” she said. “People are not going to voluntarily preserve our nation’s heritage.”

Public education and neighborhood outreach remains a priority of the project. In addition to exhibits at Wheaton Arts and the Independence Seaport Museum, AECOM has presented a few pop-up exhibits in the neighborhoods surrounding the digs. The group has published a glossy journal, River Chronicles. AECOM is also considering creating a permanent museum near Penn Treaty Park, and the firm hopes to recreate sites and finds through virtual reality by 3-D modeling artifacts found and displaying them digitally. 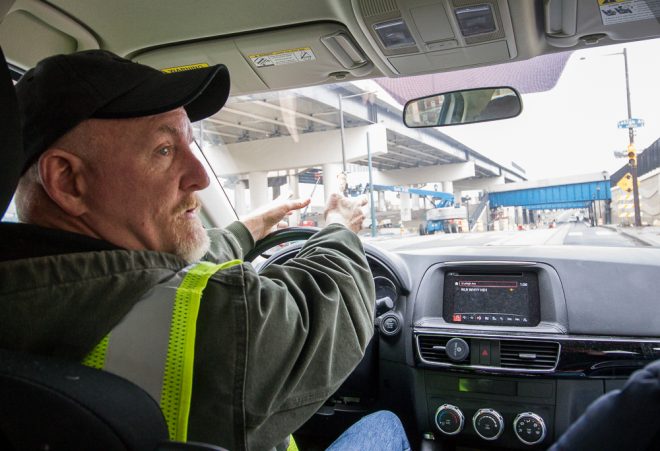 “For Dyottville, what we’re going to be able to do here soon is take those 3-D models, anchor them in space so that somebody can walk out onto the site, put goggles on, and see the factories right in front of them, even though there’s nothing there,” said Mooney, “and, eventually, literally walk inside of the factory.”

Mooney sees archaeology as a countervailing force to the great-people, big-events paradigm of historic research. The details of scientific examination on the I-95 dig go well beyond studying arrowheads and broken china.

“In some of the Native American sites we’ve found, we’re looking at information down to the microscopic level,” said Mooney. “We’ve been able to find from the interior surfaces of some of the pieces of pottery microscopic remains of what was cooked in the pot. It’s allowed us to figure out what kind of plants were growing in that particular area. So we can now say, this is what this area would have looked like, what the environment was like 3,000 years ago in Philadelphia.”