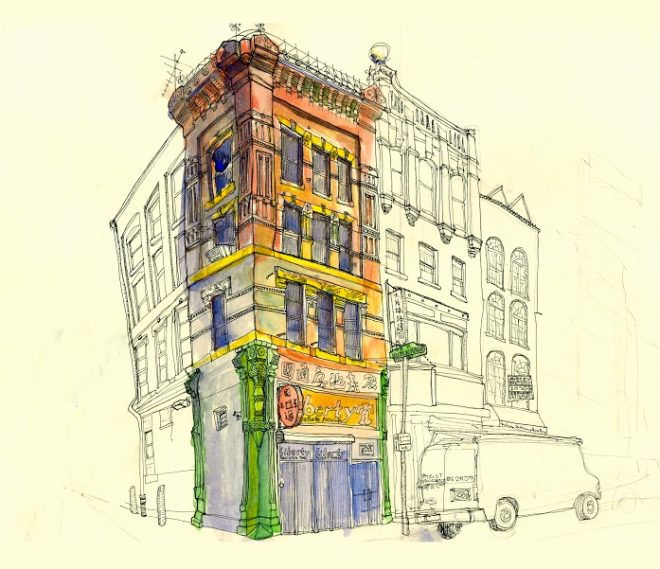 This High Victorian commercial loft on the edge of Chinatown is an unlikely and wondrous survivor. Despite an obscure architectural pedigree and the lack of any historic recognition or protection, 924 Arch Street might just be one of the most intact and interesting buildings of its kind left in Center City. A few storefront modifications and a healthy patina aside, little has changed since woodcuts of the building graced advertisements for Stewart, Ralph & Company, the building’s first known tenant, in the late 19th century. Stewart, Ralph & Co. were one of Philadelphia’s leading snuff tobacco manufacturers and operated a large “Scotch Snuff” works on Mascher Street and Columbia (now Cecil B. Moore) Avenue, portions of which still stand today. In 1898 the business merged with three other companies to form the Atlantic Snuff conglomerate, which retained the Arch Street building as its main office into the early 20th century. Other turn-of-the-century tenants included the office furniture showroom of Joseph L. Shoemaker & Co. and two German-language newspapers, the German Gazette and the German Demokrat. 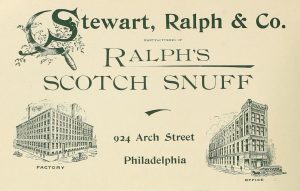 An woodcut advertisement displays the factory and office of  Stewart, Ralph, & Co. | Image: The City of Philadelphia as It Appears in the Year 1894, G. S. Harris & Sons, 1894

Today the building houses a Chinatown real estate agent and upper-floor apartments. Remarkably, its intricate iron cresting survives intact, as do portions of its original cast iron storefront. A stout, totemic column embedded into the corner of the building is a particularly idiosyncratic variation on the typical Victorian cast iron corner post. The building’s loosely Furnessian vibe is further reinforced by its ornate corbelled brickwork and incised stone lintels.

Most of Chinatown’s 19th and early 20th century building stock is unprotected and vulnerable to the same speculative development pressure currently threatening Jeweler’s Row, another enclave of 19th century survivors. Change in the neighborhood has been incremental and constant, but Chinatown remains one of the last vestiges of unpolished urbanism in Center City thanks, in part, to buildings like this one. Yet for how long is an open question.