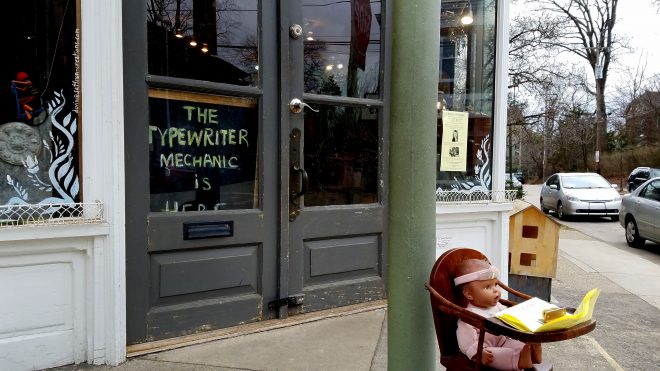 Bryan Kravitz spreads the gospel of the manual word processor at his repair shop in Mt. Airy and at Friday afternoon salons in South Philly. | Photo: Joseph G Brin

Bryan Kravitz quietly leans the needle of his record player onto an old “Peter, Paul & Mary” album. Mellow tunes spin while he gives instruction on a handful of distinctive, refurbished typewriters laid out for the public to try. Kravitz, the founder and owner of Philly Typewriter, a thriving typewriter repair business and traveling typing salon, has found a new audience to share his zen. Kravitz established his business in 1975, but recently took up hours on Fabric Row after a rotating window display of typewriters set up by historian and raconteur Joel Spivak hooked passersby with curiosity. Now, every Friday afternoon between 4PM and 6PM people show up at 703 South 4th Street clutching their old, dusty typewriters in need of expert repair.

Guided By the Tabular Key

Kravitz grew up on 4th Street in the 1960s (his grandmother operated a hot dog stand), but Philly Typewriter’s main location is in Mt. Airy, where it shares space with a yoga and dance studio, Moving Arts, at the corner of Greene Street and Carpenter Lane. The two-story building is teeming with antiques, art objects, and architectural elements from a Wanamaker mansion torn down in Center City. Opposite Weaver’s Way Co-op, the shop’s first floor was Edelson’s Bakery after WWII, an ice cream parlor in the 1950s, and then the studio of the late painter and Pennsylvania Academy of Fine Arts instructor Jimmy Lueders. The flagstone basement floor is stacked with metal shelving filled with hulking black and gray typewriters waiting for repair or to be salvaged for parts.

More than a dozen fully refurbished typewriters from Philly Typewriter were acquired last fall by the Germantown Friends School’s English Department. Anne Gerbner, director of the department’s independent study program, developed elective typewriter writing courses and has since set up in the school’s main lobby where any student can stop and tap away on an old typing machine. Gerbner says that fascinated students often ask, “Where is the delete button?” 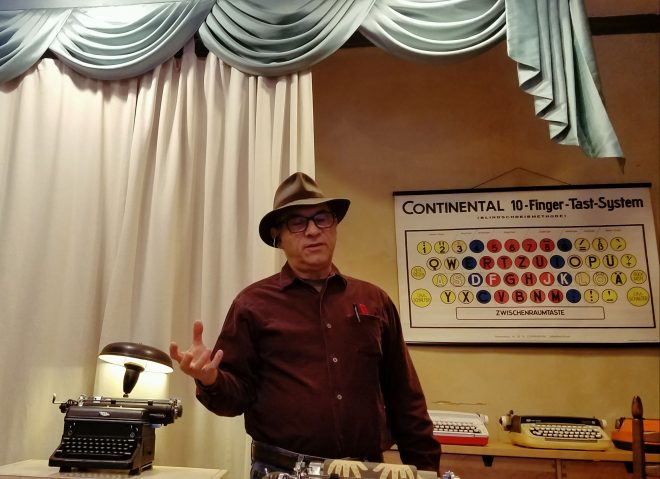 An ordinary laptop is used to monitor Kravitz’s typewriter repair database. Propped up on a folding metal table, it’s a meek and frail descendant of the robust and beautifully simple typing machines of his life’s work.

Kravitz graduated from Northeast High School in 1966 and went on to become a mechanical engineer. In the early 1990s he found himself in Berkley, California repairing typewriters in a print shop. He eventually launched his own Bay Area repair business, You’re My Type. As the digital tidal wave continued to saturate the country in personal computer advancements, Kravitz watched his trade being swept away with the rapidly obsolescing typewriter industry. He abandoned repairs as a profession and took work in sales, marketing, and communications. He would come full circle to typewriters in Philadelphia two decades later.

Today, there may be a couple of other typewriter repair people in the Philadelphia area, but Kravitz maintains, “I’m the only one who answers the phone.” After thousands of typewriters meticulously restored he still keeps his obsession in perspective. “I’m determined to keep living my life. I don’t want to be possessed by my possessions.”

Ghost in the Machine

Mike Bzozowski had just passed the bar exam and was looking to springboard his sideline writing career. Handwriting in a daily journal, he began thinking of writers he admired who made their way during the age of Remington and Underwood. He Googled “typewriters Philadelphia” and came across Kravitz’s typewriter shop in Mt. Airy. One Saturday after driving to the city from his home in Mt. Holly, N.J. he walked in and sat down to try out one of the dozen machines Kravitz had laid out for display. “Before that day I had never used a typewriter,” says Bzozowski. 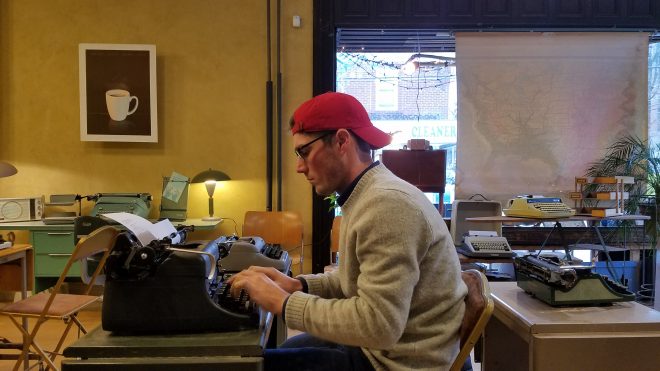 A nameless green and pale yellow typewriter stamped “Germany USSR Occupied” grabbed his attention first for its butter smooth operation, but he settled on purchasing a Royal Quiet Deluxe from the early 1950s. Typewriters are imbued with the past, says Bzozowski. Typing almost channels the spirit of the many people who used the same machine before him. “Were they writing a love letter? Poetry? A business contract?” he asks rhetorically. Indeed, typewriters are functional objets d’art with a physical connection to the human thought process emanating from the keys. They force you to slow down and fully immerse yourself in one, single channel of ideas, multitasking be damned. Typewriters command a quality of focus that does not come easily when using a laptop or iPad. “The typewriter is an instrument, a more authentic way to put my stories and thoughts on the page and to cut out the distractions of the internet,” Bzozowski says.

In the early 1900s, Philadelphia was hopping with new printing technology. It was not a national hub of the typewriter manufacturing industry like New York City, but Philly did have five typewriter manufacturers, five typewriter supply houses, and three type foundries largely clustered around South 8th, 10th, and Walnut Streets. Typewriter shops were listed in The Trades League business directory alongside blacksmiths, perfumers, and manure suppliers. 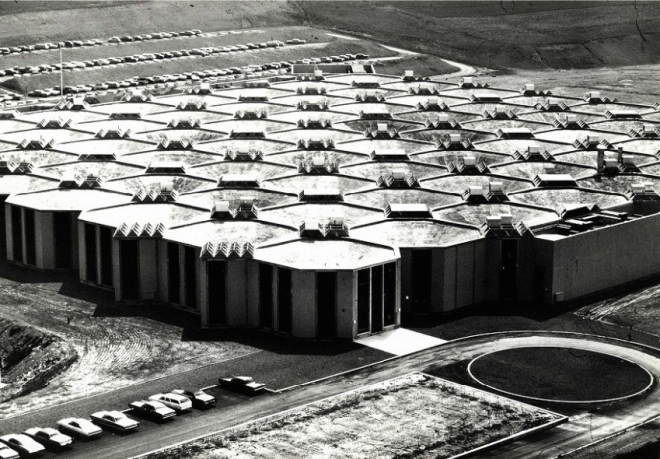 Olivetti-Underwood Factory in Harrisburg, PA, 1970. | Image courtesy of the Athenaeum of Philadelphia

In 1966, Philadelphia architect Louis Kahn was commissioned to design a 100,000 square foot typewriter factory in Harrisburg, PA. The Olivetti company had just invested in the future with the building for the production of its Underwood line. Not long after the factory was completed in 1970, the world’s first word processing software program, “Electric Pencil,” hit the market for general personal computer use. Today, the Olivetti-Underwood Factory stands as a vast, prestressed concrete monument to a dead industry. It is currently occupied by Comcast, as a cable customer service center.