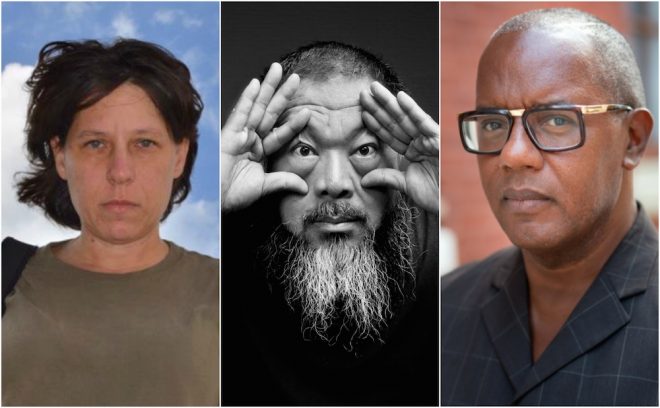 A public art tour de force this way comes. Today Mural Arts Philadelphia released the list of artists for this year’s Monument Lab, a temporary installation project that explores the role monuments play in the 21st century urban landscape. Widely expanded for 2017, the citywide public art and history exhibition, launched in 2015 inside the courtyard and on the southern apron of City Hall, will run from September 16 through November 19 featuring the work of 22 local and international artists at 10 locations throughout Philadelphia. The line up for 2017 includes contemporary art star and Chinese multimedia artist/activist Ai WeiWei, Nigerian sound and installation artist Emeka Ogboh, NYC video and performance artist Marisa Williamson and African American documentary photographer Jamel Shabazz as well as Philly’s own Zoe Strauss, King Britt, RAIR, Klip Collective, and Latina mural artist Michelle Angela Ortiz. Through installation, performance, and social “laboratories,” artists will engage in a wide range of topical issues including immigration and refugees, gentrification, equality and social justice, land use and sustainability, the opioid abuse epidemic, and neighborhood culture.

“From Ai Weiwei to Zoe Strauss, Hank Willis Thomas to Shira Walinsky and Southeast by Southeast, we are excited to announce an artist roster that seeks a diversity of ideas, identities, and monumental approaches to engaging Philadelphia’s history,” said Paul Farber, artistic director and lead curator of Monument Lab in a press release. “These artists draw on their own deep connections to the city, and spark reflection on our core values and visions. With temporary monuments and adjacent research labs for public dialogue, our goal is to change the ways we write the history of our city together.”

A complete list of artists’ projects will be announced by Mural Arts in the spring.