An Indelible Corner Of The Eraserhood 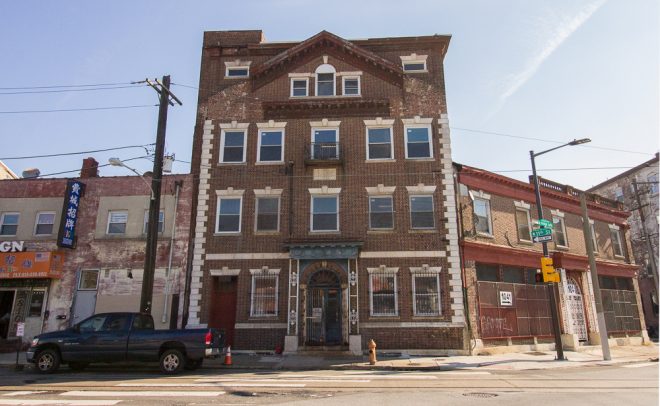 Despite Philadelphia’s habit of bricking up and chopping down industrial buildings with bad alterations, the former supply warehouse and offices of the Walls & Pearsall Company has survived with minimal damage. | Photo: Michael Bixler

Phase One of the Reading Viaduct Park has perhaps already produced the impossible: potential movement on the vast surface parking lot at 12th and Callowhill Streets just below the park now under construction. Could the present owner sell to an investor willing to develop the lot? A rough rendering toward the bottom of this Skyscraper Page thread has us wondering. The project would be one of few new sites of new construction in the neighborhood, where developers are presently at work on various projects. But meanwhile one neighborhood standby endures, as a wire and steel warehouse–and massage parlor: the 115-year-old Walls and Pearsall building at 11th and Hamilton Streets, and Ridge Avenue.

Walls & Pearsall, a plumbing supplies company, opened its doors for business in 1896 at 305-307 North 12th Street. Six years later the company acquired a large, irregular 11th Street property, and commissioned Philadelphia architect William C. Pritchett, one of the city’s many uncelebrated, but accomplished, architects to design an office and warehouse on the site. Pritchett designed the J.B. Lippincott & Company publishing house on Washington Square and the Winston Building in Chinatown. The Walls & Pearsall building, completed in 1902, included much nicer façade details than normally employed on an industrial building. Pritchett tackled the challenge of building on a trapezoidal property by designing a small, two-story section that faces Ridge Avenue, and a taller, more distinctive four-story section along 11th Street.

The plumbing supply company installed its office in the two story section at on Ridge Avenue offices, and put the taller section on 11th Street into use as a warehouse and distribution point. In 1913, Walls, Owens, and Stambach moved all operations into 437 North 11th Street and leased 435 North 11th Street to the E. J. Rooksby Company, a speciality firm in sales and repairs of complex engines used for everything from early automobiles to industrial machinery. Rooksby was one of the last companies of its type to service walking beam engines.

The ornate entryways of 437 North 11th Street, left, and 1041 Ridge Avenue, right, were installed when the buildings became a center of steel and wire goods distribution in the 1940s. | Photos: Michael Bixler

Walls, Owen, and Stambach continued to occupy 437 North 11th Street into the 1930s. E.J. Rooksby was eventually replaced by the Schneider & Chasen Company, makers of labels and the glues and varnishes used to adhere them.

By the 1940s, various manufacturers of steel and wire took over. The ornamental metalwork that still adorns the doorways today came from one of the several companies that occupied the building for the next six decades. Taylor Steel and Wire was the first, later merging with national brand Wickwire Spencer Steel in 1950. A wide assortment of steel and wire goods from Wickwire’s plant in Buffalo, N.Y.—springs, chainlink fences, chicken wire, conveyor belts, window screens, radiator covers, etc.—were warehoused and distributed from the old Walls & Pearsall building.

Around 1973, the current owners of the building, the Robey family, acquired the property and opened their steel and wire company, Gehret Wire Works. The taller section at 437 North 11th Street is still in use today as a wire and metals warehouse. An Adams-Crawford Company sign adorns the front door. The shorter section, 435 North 11th Street (now 1041 Ridge Avenue), has housed Bella Spa, a Korean massage parlor since 2006. The Philadelphia Vice Unit has made several arrests for prostitution there over the years and the business has been shut down more than once by the Department of Licenses and Inspections.