The Best Seats In The City, Ban Be Damned

Sitting on the interior walls of Rittenhouse Square is more than just a great place to eat lunch, meet friends, and smoke weed. On any given day the limestone balustrades at the center of the park hum with youthful harmony as an older crowd of readers, people watchers, and morning contemplators like myself lap up some sunshine and fill in the gaps. It is a timeless, Center City ritual and part of the Philadelphia experience.

The sitting ban initiated by Friends of Rittenhouse Square that went into effect last Thursday, under the authority of the Department of Parks and Recreation, flies in the face of this tradition and the notion of equitable public space. Represenatives of the neighborhood group said that the rule was enacted to curb vandalism and marijuana smoke, and was likely a misguided response to an unrelated nighttime shooting in the park last October. To observers, the decision reeked of privilege and thinly veiled racism, an eerie reminder of the neighborhood’s rich history of classism and exclusivity. The ban backfired after public outcry and general dismay triggered Mayor Kenney to reverse the order on Saturday through Twitter. On his account Kenney wrote, “Regarding Rittenhouse Square, I’m frustrated too. This government is very large and at times things just get by you. Sit where you want.” He ended the tweet with a two finger peace emoji. Although the ban hasn’t been officially lifted the mayor expects it to be “worked out.”

Kenney gets it, I think, and so do the 1.5K people who have shown interest or plan on showing up to the “Sittenhouse Lunch Time Sit-On Celebration” Facebook event today at noon. Will Friends of Rittenhouse Square see the error of their ways? The group could certainly benefit from taking a seat along the balustrades and get to know the young folks there that consider the interior wall of the park a place for communion, connection, and sanctuary.

Sitting on the wall at Rittenhouse Square: a Philadelphia tradition since way back in the day. All photographs courtesy of the George D. McDowell Philadelphia Evening Bulletin Collection at Temple University Libraries, Special Collections Research Center. 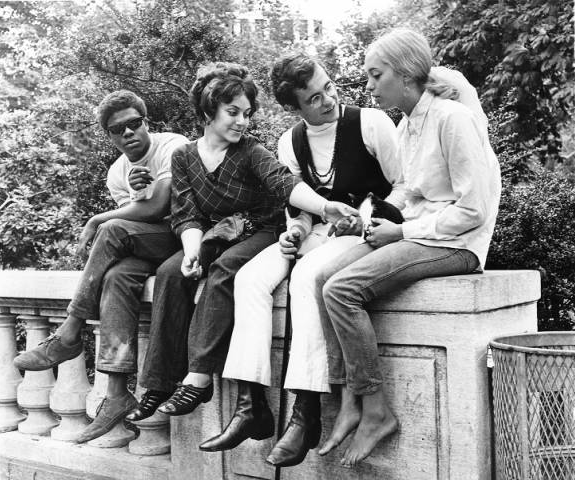 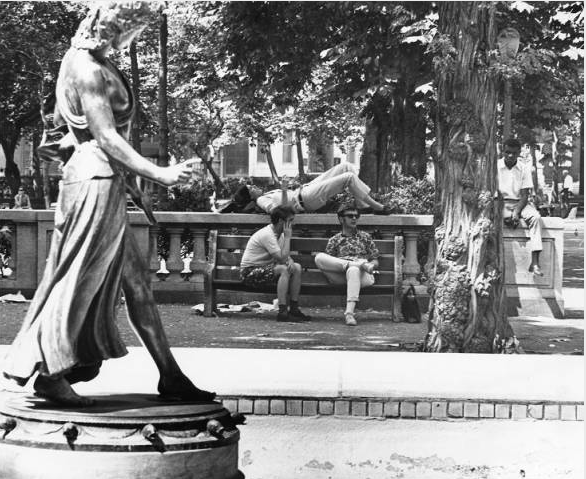 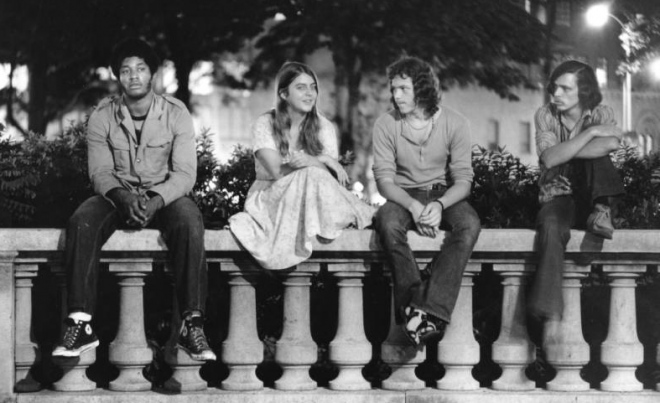 “Kathy Friend sits with some friends in Rittenhouse Square on a summer evening, 1972.” 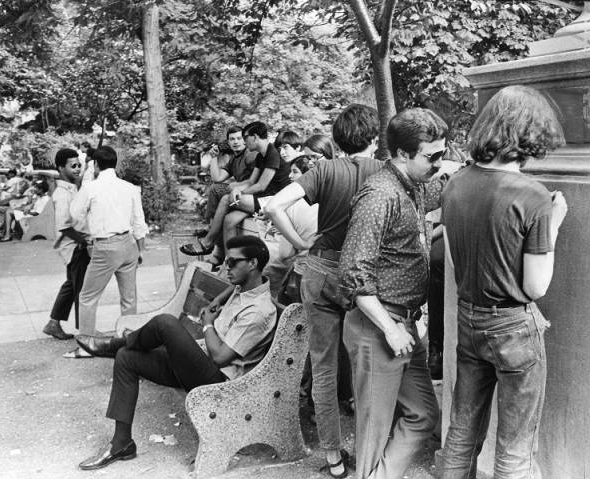 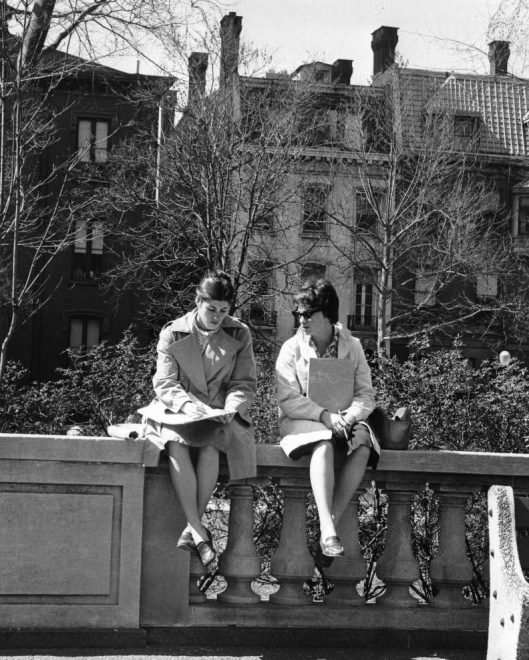 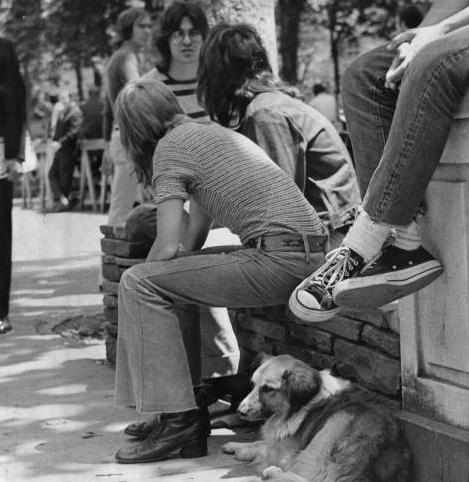 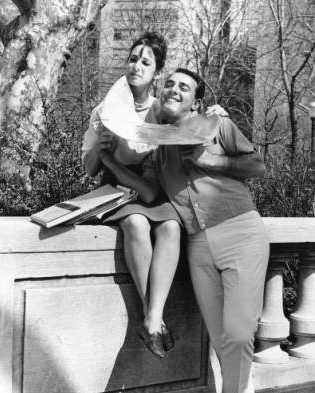 “Employees stand in Rittenhouse Square facing the Army’s Electronic Command Building, after a cigarette butt smoldering in an ashtray forced them to leave the building, 1968.” 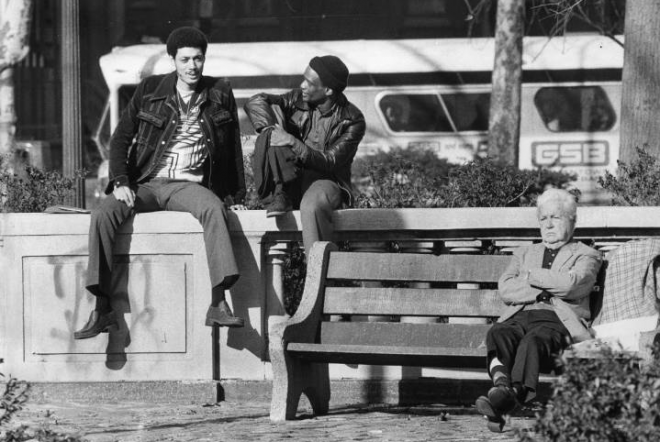 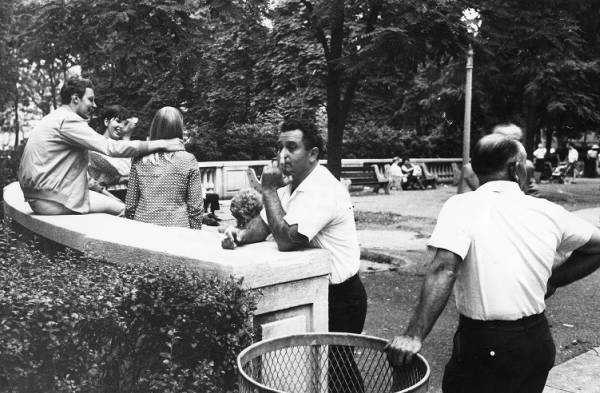 “A group of people relaxing in Rittenhouse Square, 1968.” 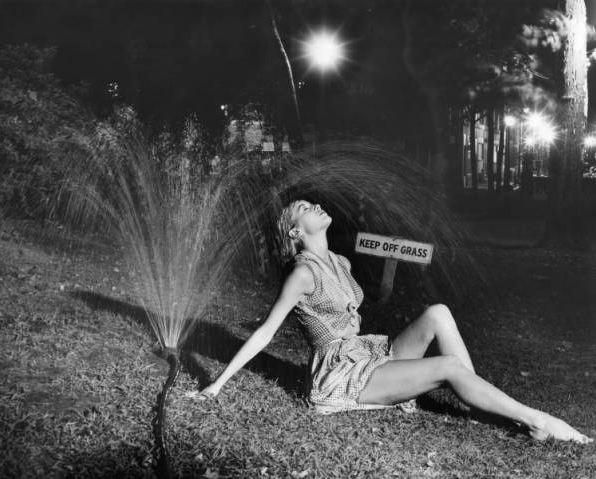 Rittenhouse Square is the BEST place for grass. “Despite the “Keep off Grass” sign, Mrs. Carolyn Sulby can’t resist the opportunity to cool off under the spray of a sprinkler in Rittenhouse Square, 1957.”