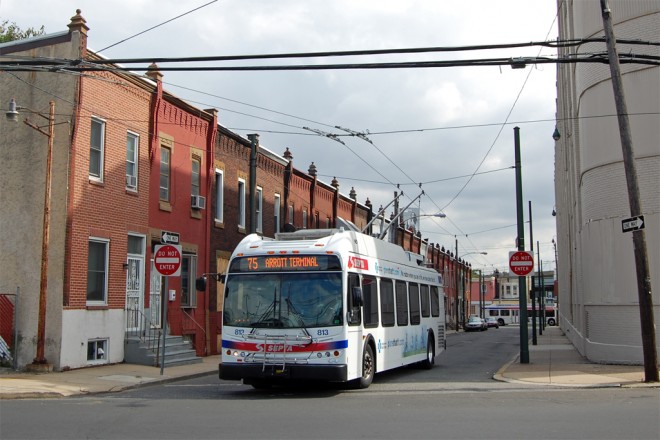 Full Disclosure: Laura Cofksy is communications director of 350 Philadelphia, an environmental advocacy group and organizer of the Fossil-Free SEPTA campaign.

According to the U.S. Environmental Protection Agency, the Nicetown section of North Philadelphia has more fine particulate pollution than 78 percent of neighborhoods around the country. This, in part, has resulted in a nearly one in three childhood asthma rate for zip code 19140, far higher than the 21.5 percent rate for the city as a whole or 18.4 percent for southeastern Pennsylvania. A child in 19140 is about four times as likely to have asthma as an average American kid. Nicetown, which is home to Edward T. Steel School (540 students) and Simon Gratz High School (1,110 students), is also home to SEPTA’s Midvale bus depot and the Roosevelt Expressway, both major sources of particulates in the air. A running club at one of the local schools keeps a bag of inhalers handy at all times.

Now, this neighborhood is targeted for SEPTA’s Midvale Complex natural gas power plant, which was approved by the transit authority’s board last November.

Nicetown may be a guinea pig for more combined heat and energy power plants. The SEPTA Board confirmed during a meeting with 350 Philadelphia that, if the project “went well,” they would consider building more plants. Two other sites under consideration are 69th Street Station and Powelton Yard. Like Nicetown, these are underserved, minority communities with disproportionately high poverty rates. Census records show that, as of 2010, the population of Nicetown was 85.5 percent African American, 7.4 percent Hispanic, 2.9 percent white, 2.2 percent Asian, and 2 percent other. Not a single member of the SEPTA board of trustees lives in Nicetown.

More than 50 local organizations, groups, schools, businesses and unions, as well as State Representative Rosita Youngblood, have endorsed a campaign calling on SEPTA to cancel their Midvale Complex plans. Four other local politicians–Councilwoman Cindy Bass, Councilman Kenyatta Johnson, and City Council At-Large members Helen Gym–publicly requested that the SEPTA Board postpone its vote. They argue that, instead, SEPTA should commit to begin immediately transitioning to renewable energy sources like wind and solar. The argument against the plant is as much about health as it is about economic resiliency and curbing emissions that effect climate change. The campaign against SEPTA’s investment in natural gas is part of a global movement for a just and rapid transition from fossil fuels to renewable energy.

Natural Gas Is Not “Clean”

In the last 10 years many business leaders and politicians have been touting natural gas as a clean-burning, alternative energy source that can effectively bridge the gap between dirtier fossil fuels like coal and oil, and clean, renewable energy sources like wind and solar. This is false. The truth is that burning natural gas releases more than half the carbon dioxide of coal, which is among the dirtiest of fuels. Carbon dioxide is of utmost concern to scientists because it is one of the main causes of climate change. Where natural gas starts to outstrip coal is in methane emissions. Methane, which, until recently, was rarely accounted for when estimating climate change risks, is starting to gain attention due to America’s increased dependence on natural gas. Methane leakage is common during natural gas extraction, and each molecule produces 86 times more warming than a molecule of carbon dioxide over a period of 20 years. This spells bad news for Philadelphia, which is the tenth most vulnerable city in America to the effects of climate change.

The concerns over natural gas are not just related to the devastating impacts of climate change, many of which will take decades to fully realize. A natural gas power plant in Nicetown means a local increase in nitrogen oxides (NOx), volatile organic compounds (VOCs), particulate matter and ultrafine particulate matter, all of which have immediate, detrimental effects on human health.

If the plant in Nicetown is built, ultrafine particulates will likely be the most pressing concern for residents since this type of pollution is not yet fully understood and may pose a “surprise” risk. Ultrafine particulates are not yet regulated by the U.S. Environmental Protection Agency and many studies have linked them to numerous health problems. SEPTA has consistently refused to do a study on this particular pollutant.

The other three pollutants are better understood and highly toxic. NOx contributes to the formation of ground-level ozone, also known as smog. Ozone is linked to an array of respiratory illness, including the development of childhood asthma. On top of NOx, VOCs at higher concentrations can also damage lungs, in addition to the liver, kidneys, and central nervous system. Particulates, which the World Health Organization says has no safe level of exposure, exacerbate and contribute to both asthma and heart disease, as well as dementia, impaired cognitive development in children, premature births, and other problems.

Roughly 37,000 people live within a mile of the proposed power plant site in Nicetown. 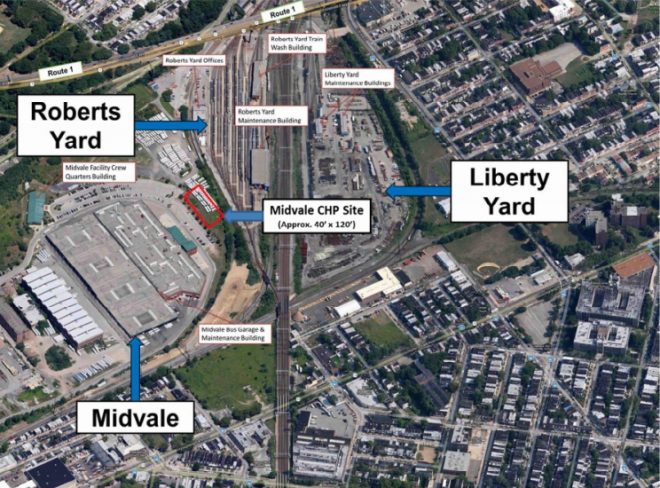 The Cause for Cleaner Transit

350 Philadelphia began a campaign for clean fuel, Fossil-Free SEPTA, in 2016. We host community forums in Nicetown, canvas for signatures, build coalitions with local groups, and attend SEPTA’s monthly board meetings. For the past few months, 350 Philadelphia has continually requested that SEPTA perform a health study related to the Nicetown proposal. So far, SEPTA has only released an emissions study conducted by an energy industry research firm, Mondre Energy, that analyzed ground levels of NOx and fine particulates. The study does not detail the potential health risks associated with the estimated pollutant levels, nor does it look at pollutant distribution in neighborhoods surrounding Nicetown. 350 Philadelphia has not been briefed on the methodology used to formulate the report. There are no estimates in the report of the potential level of emission of VOCs and ultrafine particulates. This, and SEPTA’s persistent unwillingness to conduct an alternatives analysis looking into more sustainable ways to accomplish the agency’s climate resiliency goal for the site in question, is a cause for great concern.

The SEPTA Board claims that the Nicetown natural gas power plant would be a potent source of power for regional rail trains at Midvale Station in case of a blackout. The plant would run 365 days per year and would provide enough electricity to power all the trains that SEPTA runs north of the Wayne Junction Station, on an off-peak schedule, if such an emergency were to occur. SEPTA officials frame the proposed plant as contributing to the agency’s climate resiliency plan and want to be prepared for more extreme weather related blackouts. The blatant irony is that SEPTA is planning to commit to over 20 years of fossil fuel consumption in order to mitigate the effects of climate change.

Officials at SEPTA insist that natural gas is cheaper, and, therefore, better than wind and solar energy. However, numerous experts argue that natural gas prices will eventually rise to the point that it can no longer compete with renewable energy. The contract for the Nicetown plant would last more than two decades. If the transition happens within 20 years–which is almost certain–the extra cost will likely be passed down to consumers in the form of fare hikes or service cuts.

One reason for the agency’s position is that SEPTA’s budgetary decisions are being directed by state politicians with connections to the oil and gas industry. In 2012, then State Representative Stan Saylor, a Republican from York County and the legislature’s Majority Whip, told the Inquirer that Pennsylvania was missing an opportunity to “make sure every mass-transit system in this state is run on natural gas.” He argued that the legislature should penalize SEPTA by cutting funding. According to this report, SEPTA offered to explore building a natural ­gas powered generator near its Wayne Junction station to produce electricity for its rail system and heat for nearby buildings rather than buying natural gas buses.

In March 2013, then SEPTA General Manager Joe Casey testified before the PA House Appropriations Committee and made a case for additional funding for the agency. During the hearing representatives questioned SEPTA’s decision to buy hybrid buses instead of vehicles that run on CNG (compressed natural gas). Casey stated that launching a CNG program would be too costly, but that SEPTA wouldn’t be opposed to potential ideas for public-private-partnerships related to CNG.

There are many precedents for transit agencies transitioning to renewable energy: The Netherlands has committed to running the nation’s mass transit on 100 percent renewable energy. In the U.S., domestic urban transit systems like San Francisco’s BART, are making a deliberate move toward more wind and solar power.

SEPTA is taking small steps in the right direction, as exemplified by their recent purchase of 25 electric buses. However, the Midvale Complex will counteract emissions gains made by electric vehicles and condemn the agency to two decades of natural gas, far more dangerous for the health of Nicetown’s, and Philadelphia’s, residents. The harm would likely be irreversible.

Laura Cofsky Laura Cofsky is the communications director for local environmental group, 350 Philadelphia. Born and raised in NYC, Laura came to Philadelphia to pursue a BA in English at the University of Pennsylvania. During her time at Penn, she fell in love with Philly, and decided to move back soon after graduation. Her writing has also been featured in USA Today, The Philadelphia Inquirer, Fitness magazine, HerCampus.com and The Daily Pennsylvanian.