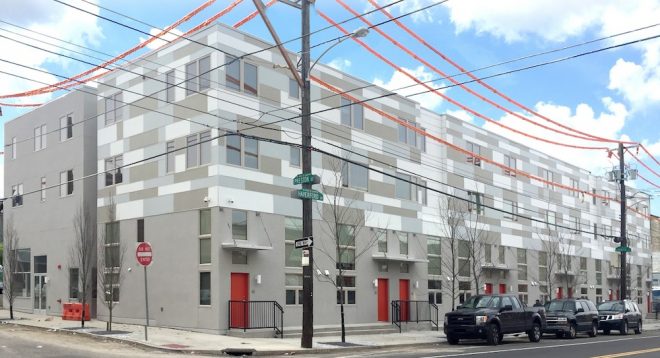 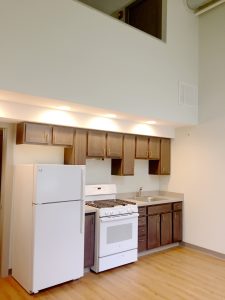 Kitchen and loft space inside a unit at 4050 Apartments. | Photo: Peoples Emergency Center

“Lower Lancaster Avenue is home to the second largest community of artists in Philadelphia, who have long been attracted to the area by its stock of affordable housing, public transit availability, active arts groups, and close proximity to galleries and educational institutions,” said Kathy Desmond, president of PEC. “With current housing costs rising to levels that could push out lower income artists, which may also be working families, 4050 Apartments aims to preserve an important part of what defines these communities.”

The three-story, 24,350 square foot apartment complex was designed by PZS Architects and features one, two, and three bedroom units with additional personal studio space. The building’s common areas include shared exhibition and workshop space and a community room on the ground floor. The project broke ground in 2016 on a long-vacant lot at at the intersection of 40th Street, Lancaster, and Haverford Avenues.

PEC staff anticipates the apartment complex to be fully occupied by the end of March. Leasing was open to all applicants within the fixed income limit criteria, with preference of occupancy given to active, early-to-late career artists in need of affordable housing. Qualifications for eligible tenants were based on income guidelines established by the Pennsylvania Housing Finance Agency and the Philadelphia Housing Authority.

PEC currently operates 243 units of affordable emergency, supportive, transitional, and permanent housing available to low-income families. “The addition of housing designed to support other households [artists] aligns with goals put forth by the local community during the latest neighborhood planning process,” said Desmond.