Peeling Back The Layers On Malcolm X’s Mosque #12 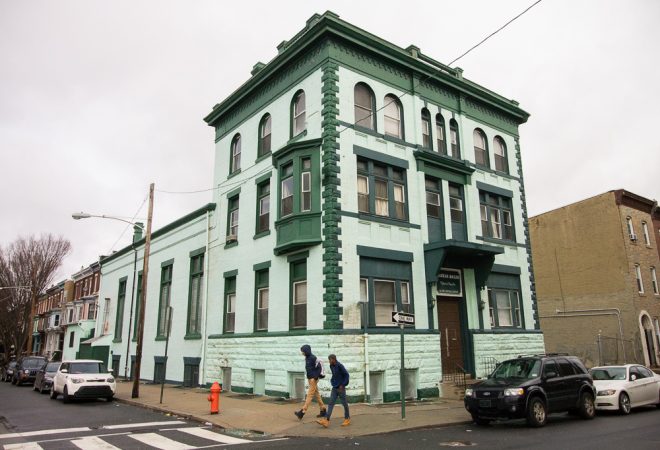 For over two decades a former trade school at Susquehanna and Park Avenues served as a center of worship and community programming for the Nation of Islam after Malcolm X moved Temple #12 there in 1962. | Photo: Michael Bixler

The minty-green meeting hall at 1319-21 West Susquehanna Avenue in North Philadelphia is a quiet cultural landmark with a long track record of community and spiritual use. Built 114 years ago for a trade school, the building came to prominence in the early 1960s when it was leased by the Nation of Islam and placed under the direction of Malcolm X. The former Students’ Chapter Hall, now home to Masjid Makkah, a neighborhood mosque of traditional Islamic faith, is a vivid of example of a building related to Philadelphia black history that requires the attention of preservationists.

The Students’ Chapter Hall, a trade school founded by veteran educator Bertha A. Winkler, was built in 1902 after operating for a few decades out of a row house at 2334 North 6th Street. Winkler commissioned Philadelphia church and school architect Jacob Naschold to design the new school at the corner of Park and Susquehanna Avenues.

The school was the first building to occupy this large corner property, having only been cleared several years earlier, after an old diagonal highway called Turner’s Turnpike was eliminated and the roadway reconfigured. Students’ Chapter offered day and evening courses in mechanical drawing, bookkeeping, mathematics, shorthand, penmanship, business writing, dressmaking, and millinery. Courses in dancing and piano were added a few years later. The Winkler family also lived there.

In 1931, Tschopp sold the building to Algernon Francis Thompson, who moved his Thirty Day Business College there. This school was similar to the Students’ Chapter, but was primarily targeted at women. Course offerings included bookkeeping, preparation and completion of business-related paperwork, payroll accounting, and office routine. By the 1940s, the school came to be known as Thompson’s Business School, though it isn’t related to the several schools around the country with the same name. The business school occupied the building until 1962.

Students’ Chapter Hall was purchased by nearby Our Lady of Mercy Church at 2131-59 North Broad Street. In 1962, the church leased out the building to the Nation of Islam. 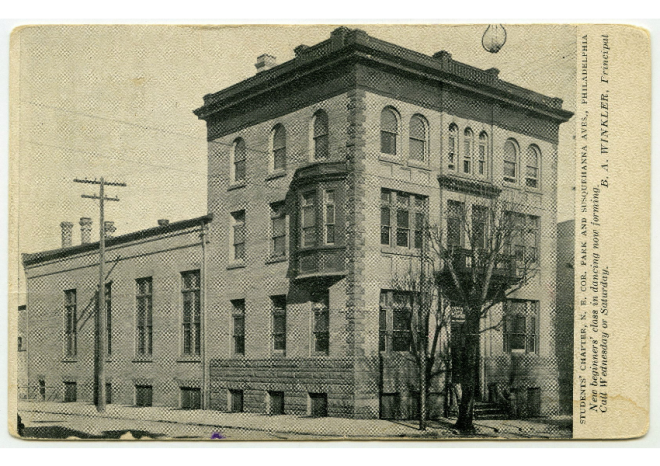 Several years earlier, Malcolm X came to Philadelphia and established Temple #12 (sometimes called Muhammad’s Mosque #12) at 4218 Lancaster Avenue. The Nation of Islam moved the mosque to the old Students’ Chapter Hall in 1962. More NOI temples were established over the years in North and West Philadelphia. This was not the first time the old technical school would be used for religious services. It had been the temporarily home to Congregation Adath Jeshurun in 1912 and the First Association of Spiritualists in 1932.

In addition to being a mosque, Temple #12 established a private college, the Mohammed University of Islam #12.

In the early 1970s, the old technical school also became the headquarters of the city’s Black Mafia, which used Mosque #12 as a front. The Black Mafia controlled large areas of the city and through its network of criminals pursued narcotics sales, contract murders, armed robberies, fraudulent credit and check schemes, loan sharking, welfare fraud, shoplifting, prostitution, and extortion.

An investigative report by the FBI alleged that Black Mafia members hid behind Islam “as an umbrella to protect themselves from the law and the public.” The report also stated that the Muhammad’s Mosque #12 was known locally as the “gangster mosque.” Leader of the Nation of Islam itself did not approve of the Black Mafia’s presence in the mosque and, it has been said, often threatened to send hitmen to remove them.

In 1974, the Nation of Islam acquired the property from Our Lady of Mercy. The Black Mafia lost much of its influence by the middle of the 1970s, and Temple #12 continued mosque-related activities in the old Students’ Chapter Hall until selling the building to the current owners, Hyderabad House Inc., for $33,000 in 1985. Temple #12 is currently located at 2508 North Broad Street. Hyderabad House Inc. is a non-profit organization with a mission to engage Muslims with education and community-related pursuits. The old technical school is now home to Masjid Makkah, a neighborhood mosque with 350 weekly congregants. The mosque also serves as a community center for the neighborhood and offers classes in Islamic studies.