Capturing The Ghosts Of Demolition

My attraction to demolition was sparked in 2004 when Veteran’s Stadium was razed. I wasn’t hooked by the implosion itself, though it was fun, but rather during a visit I made while the stadium was being prepped. Seeing an old, familiar place completely empty and being slowly dissected and erased before my eyes was at once exhilarating and gut wrenching. I took some memorable photos that day.

I enrolled in grad school for architecture soon after. A main interest of mine during this time was the creation of large-scale cutaway drawings that exposed the “guts” of buildings and the swarm of human and mechanical activity inside. In 2005, in anticipation of its imminent demolition, I let myself into Philadelphia Convention Hall for one last look. Unbeknownst to me, workers started tearing it down the following day. That same eerie feeling of nostalgic heartache and fascination was overwhelming. I found a spot outside of the building and began taking photos each day with no real goal in mind except being able to flip through my visual record later to watch the building disappear.

I started compulsively tracking and visiting demolition sites with the same simple goal of taking serial frames over the duration of the process. My motivation reached a turning point when I discovered the real potential of my project by creating layered images.

The process is truly low-tech. I simply record the spot where I stand in my notepad and capture the camera position by a highly-evolved proprietary technique involving a Sharpie pen and transparent film cut to the size of my viewfinder. My camera is outdated and not very fancy. I don’t use a tripod unless it I’m documenting an implosion (or in the case of the PNB building sign, a heli-demolition). One day I may actually invest in decent equipment, but part of me wants to keep it simple. I suppose this is a minimalist point of pride. 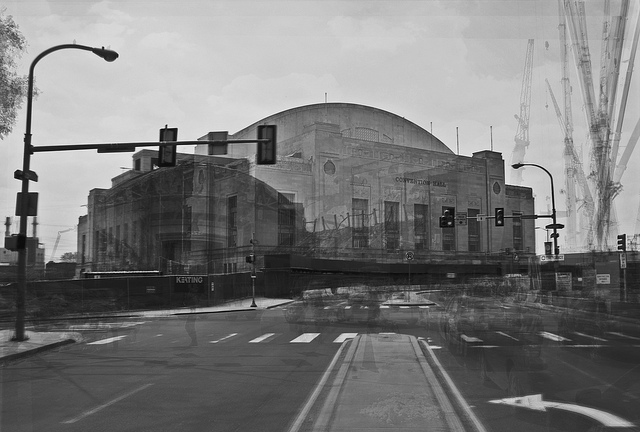 Philadelphia Convention Hall and Civic Center, 3400 Civic Center Boulevard. Demolished in 2005 by the University of Pennsylvania for the Perelman Center for Advanced Medicine.

Earlier projects, some of which remain my favorite, relied on dumb luck for their composition. I put more thought into planning the shots these days, but, in the urban context, there are so many factors that can limit the possibilities. More than a few times I have framed up a great vantage point, and shot it over several weeks or months, only to have a large fence or construction trailer park itself right in the way of the shot. Because of this I like to shoot from as many unique points as possible around a site.

Once I have a complete set of images I use Photoshop to layer multiple exposures in a way that reveals the innards of the buildings. Recently I have begun to filter out signs of life surrounding the demolition sites. In earlier compositions I left people, cars, and other street life in the shots. I found that filtering the “white noise” of daily life out, athough it felt dishonest at first, evoked more of that eerie emptiness that initially drew me to demolition, while also focusing the composition on the subject building.

The post-processing is not very complicated and relatively quick. The rewarding part for me is the day to day visits to the sites over months and, sometimes, years. Implosions inject plenty of adrenaline and excitement into the early-morning, with the last-minute jockeying for position and subsequent rumble of explosives. I often run into last-minute bad luck where somebody or something blocks my frame (see Norman Blumberg, where I just decided to embrace this.) But it is the images born from months of collection work that portray a silent, ethereal swarm of equipment around a ghostly building that excite me the most. This is what I am after when I plan the shots. Some fail. Some turn out better than expected. But all still succeed in capturing the passing of monuments that mark the city’s movement through time.

The following composites were developed from demolitions that took place between 2015 and 2016. 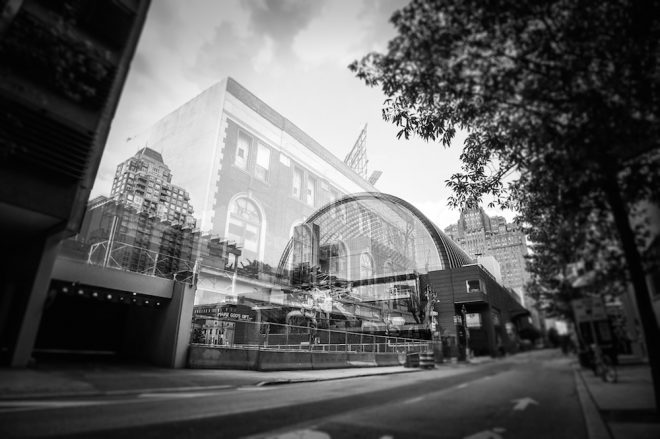 Philadelphia International Records at Broad and Spruce Streets. Built in 1920. Demolished in 2015 by Dranoff Properties for the SLS International Hotel. 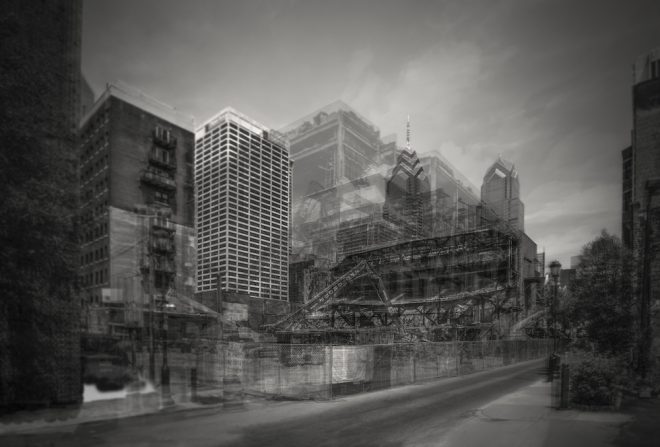 The Boyd Theater at 19th and Chestnut Streets. Built in 1928. Demolished in 2015 by Pearl Properties for a mixed-use condominium tower. 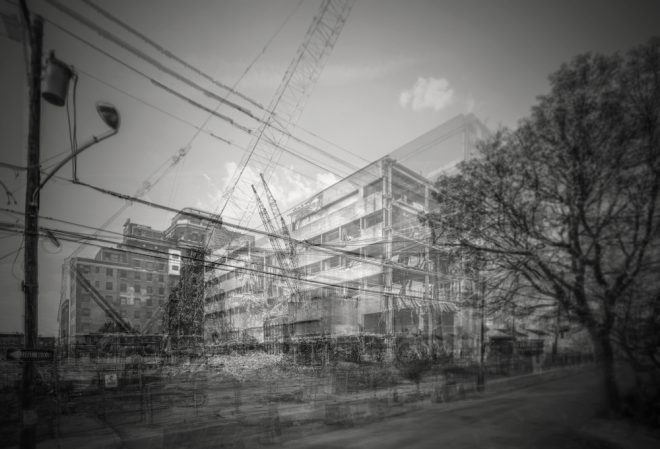 Mt. Sinai Hospital on the 400 block of Reed Street. Built in 1922. Demolished in 2016 by Concordia Group for town home development. 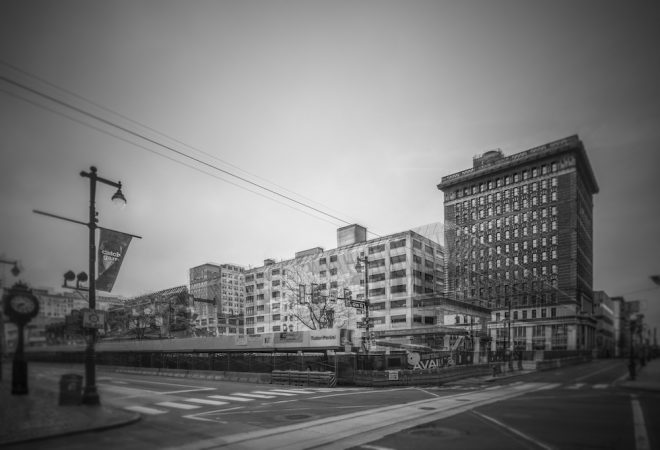 Girard Square, the two-story remains of the N. Snellenburg & Company department store building at 11th and Market Streets. Built in 1889. Partially razed in the 1970s. Demolished in its entirety in 2015 for National Real Estate Development’s East Market development. 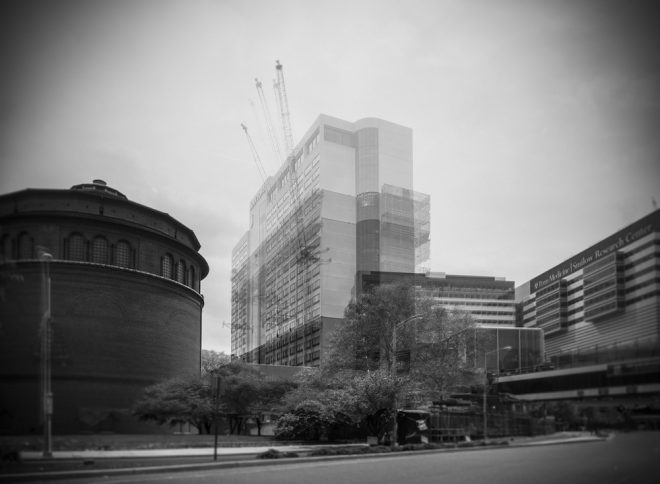 Penn Tower (Hilton of Philadelphia) at 1 Convention Boulevard. Built in 1974. Demolished in 2016 by University of Pennsylvania for Penn Medicine’s New Patient Pavilion. 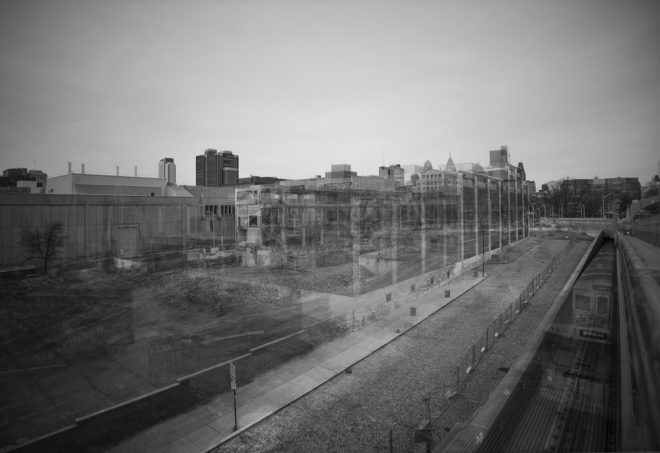 Whitman’s Chocolates at 5th and Race Streets. Built in 1941. Demolished in 2016 by Priderock Capital Group for town home development. 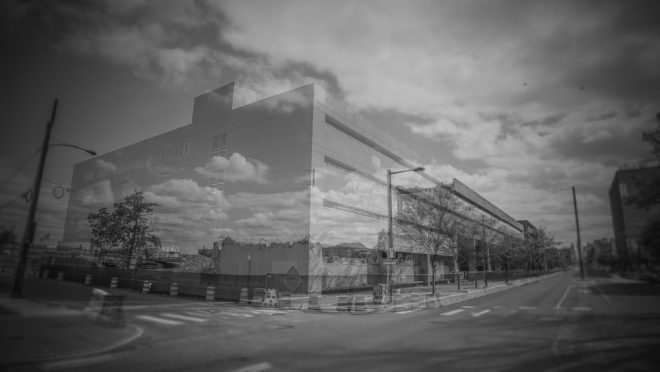 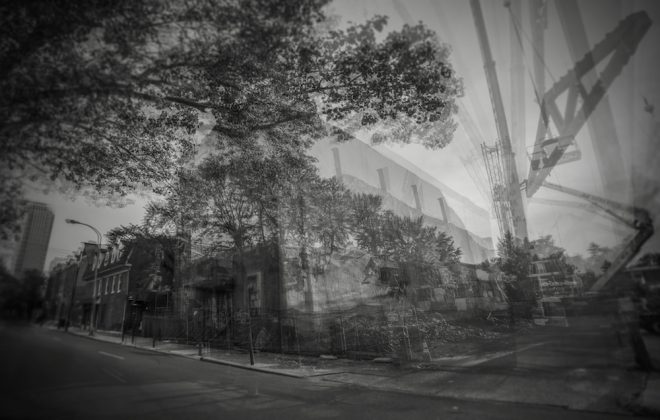 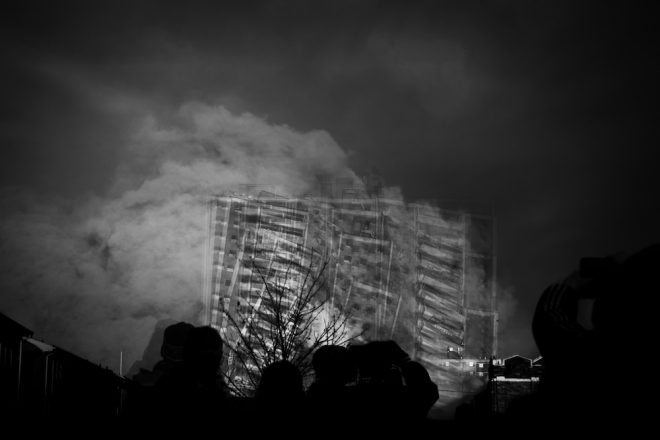 Norman Blumberg Apartments at 2311 West Jefferson Street. Built in 1967. Demolished in 2016 by the Philadelphia Housing Authority for urban renewal redevelopment.