In Belmont, The Making Of A “City Of Villas”

Last week marked the 126-year anniversary of the passing of Pennsylvania Congressman William D. Kelley, a highly influential, but long-forgotten Philadelphian who helped shape West Philadelphia’s Belmont neighborhood. In the decades leading up to Kelley’s death at 75, the one-time journeyman jeweler turned lawyer and politician lived at the corner of 41st and Parrish Streets and held title to several parcels in the vicinity of his home. In the years leading up to the Centennial International Exhibition of 1876, which placed Belmont alongside World’s Fair stage in Fairmount Park, Kelley’s influence in real estate speculation in the neighborhood reached a precipice, as his holdings gradually gave way to suburban development after the Centennial when an influx of homebuyers began settling there. But the story of Belmont’s origins blossoms into view around several institutions and a famous Scottish mason that made the neighborhood their own as Kelley’s imprint began to fade. 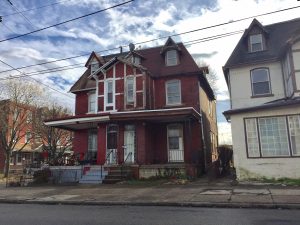 Most of William D. Kelley’s holdings were undeveloped woodland according to period atlases. These, among other parcels in Belmont, awaited investment in an area sandwiched between Lancaster Avenue and the Pennsylvania Railroad’s lines running adjacent to Westminster Avenue. Proliferating streetcar connections and the Centennial’s magnetism aided in Belmont’s imminent influx of residents during the 1880s and 1890s. Kelley sold off lots along the 4000 block of Parrish Street (essentially his backyard) for over two decades, continuing Belmont’s predominant pattern of subdivision and speculation as land values rose. A years before his death, the block bound by N. Preston Street, 41st Street, Parrish Street, and Ogden Street became the thriving campus of the West Philadelphia Hospital for Women.

In 1889, the hospital opened its doors at 41st and Odgen Streets on the northern extent of land formerly owned by Kelley. The hospital’s novel approach provided care to women by women and was spurred on by the efforts of Elizabeth Comly-Howell, a co-founder, board member, and practitioner at the hospital. In the years leading up to the opening of WPHW, Belmont was on the verge of becoming what historian M. Laffitte Veiera described as, “a city of villas,” that would represent the spread of the old city’s sister-suburb beyond its nascent form. Now, 127 years since Kelley’s death, Belmont no longer exists as a city of villas per se, but instead as one of Philadelphia’s least-mined architectural lodes. Semi-detached houses, halved due to degradation and eventual demolition, remain stoic reminders of Belmont’s suburban infancy, while several Second Empire twins, once highly-sought, speculative real estate, now underscore the neighborhood’s economic decline. Along North Preston Street and Westminster Avenue, ornate, Victorian row houses and Gothic Revival twins, built in the late 1880s and early 1890s, provide a tangible link between Belmont’s growth from a fringe suburb to an urban haven. 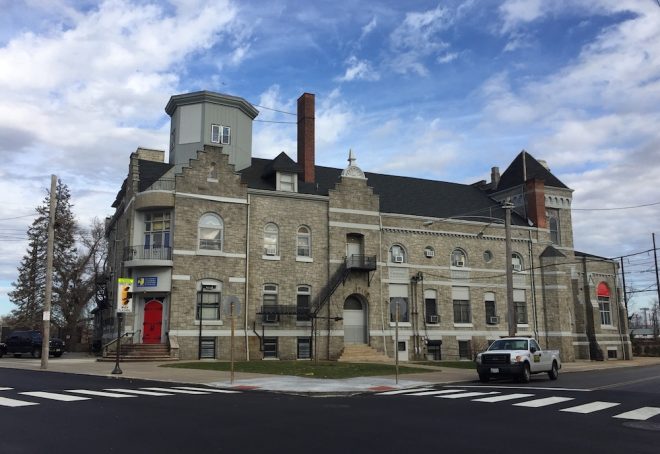 The opening of the Thomas Lansdale-designed PRR Branch YMCA (currently occupied by Belmont Charter Academy) in 1892 brought yet another influential institution into Belmont. PRR maintained a strong presence in the community as a direct result of the Y’s opening. Permit applications for speculative housing in the vicinity of the YMCA and the WPHW swelled in the early 1890s, and PRR employees living in the surrounding blocks frequented census records by 1900. Belmont became a blend of semi-detached villas, high-style, moderately-sized row houses, twins, and a select few single-detached corner properties that crowned the corners of their blocks.  Around the hospital, the school, the YMCA, and an influx of new residents in the neighborhood coalesced.

The Mark of a Mason

The WPHW began its operation in Belmont within several existing buildings along the block it redefined, very likely including Kelley’s former home. By 1893, the crimson-clad Queen Anne standing at 836 N. Preston Street was built on land once owned by Kelley adjacent to the WPHW campus, adding to the neighborhood’s architectural nuance. Appropriately, the four story mansion’s restrained detailing and solid stance befit its original owner, Alexander McGaw, whose contributions to significant structures in Philadelphia and the northeastern U.S. are largely unrecognized, yet profound. McGaw, a Scottish émigré and masonry contractor, made a name for himself in Philadelphia, New England, and as far west as Minnesota as the go-to subcontractor to engineers of several major infrastructural projects, including the Thames River Drawbridge in New London, CT (1889), Duluth-Superior Bridge in Duluth, MN (1897), Philadelphia’s Girard Avenue Bridge (1874), and most notably, as contractor in charge of the construction of the pedestal of the Statue of Liberty, completed in 1886. McGaw’s career flourished as a result of contracting partnerships with civil engineers who considered his talent among top masonry construction experts of the time. 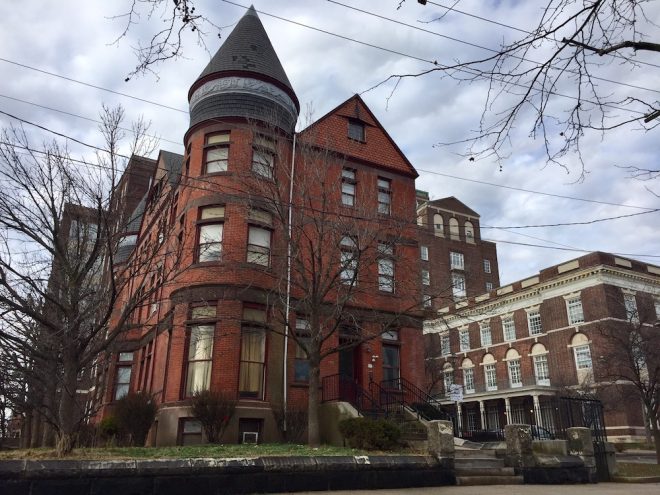 836 N. Preston Street’s primary façade is distinguished by its three-story turret and conical dome. Brownstone water table and belt courses divide the façade, while plaster cast motifs and imbricated shingles represent ornamentation common to the Queen Anne style. The Women’s Hospital of Philadelphia stand at right and in the background. | Josh Bevan

McGaw, born in Drummore, Scotland in 1832, arrived in Philadelphia in 1873 and resided at the Bingham House at 11th and Market Streets from around the time of his arrival to the early 1880s. McGaw’s arrival was well-timed with the construction of the Girard Avenue Bridge. Whether or not McGaw’s move to Philadelphia was directly related to the bridge’s construction is unknown. In 1883, McGaw listed his residence at 819 N. Preston Street, signaling his move to Belmont and the beginning of the McGaw family’s story in the neighborhood. By this time, streets within eye shot of McGaw’s residence, essentially one-half of an Italianate twin, were checkered with semi-detached housing and soon to be subdivided parcels of prominent landowners and their estates like those of the Vodges and Kelley families. Higher-density row house neighborhoods were located closer to Lancaster Avenue and east of 40th Street.

In late June 1889, McGaw acquired two lots measuring a combined 102 feet by 109 feet at the northwest corner of Parrish and North Preston  from William D. Kelley. Between 1889 and 1892, McGaw continued to list 819 N. Preston Street as his primary residence in city directories, suggesting that construction of his Queen Anne mansion did not immediately follow the acquisition of the corner lots that were located diagonally across North Preston Street. The four-story masonry residence first appears on Bromley’s Atlas of the City of Philadelphia, published in 1892. As McGaw established residency there the WPHW’s expansion kept pace with that of the neighborhood in the 1890s, eventually growing to surround McGaw’s mansion to the north and west as interns, graduate nurses, and maternity staff rounded out the roster. By 1900, the hospital was pressing the confines of the residential buildings it was housed within along the 4000 block of Ogden Street and Kelley’s former mansion. 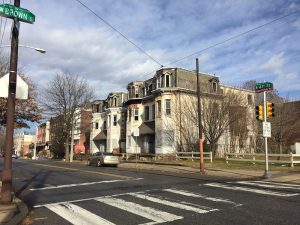 McGaw resided at 836 N. Preston through 1905. The contractor managed to mold his pursuits in masonry around technical and entrepreneurial abilities, working among reputable engineers and, in the 1890s, operating under the McGaw & Sons brand. Following McGaw’s passing in January 1905, the Washington Times listed him among over 300 “Men and Women, Whose Place in This World’s Work It Will be Hard to Fill.”

McGaw’s sons, William and Robert, found their way at various points into their father’s trade before shifting their pursuits to stock brokerage after 1910. During McGaw’s residency as a next door neighbor to the WPHW more moderately sized homes were constructed along the 800 block of North Preston Street, eventually filling a block in transition and providing opportunity for ownership or rental to newcomers, many of whom had railroad-related occupations. McGaw’s sons remained residents at 836 N. Preston Street through the early 1920s and managed to rent the expansive, four story mansion to several lodgers between 1910 and the dawn of Great Depression.

For Women, By Women

WPHW expanded in 1917 with the construction of the Elizabeth L. Peck Maternity Ward. It was designed by Walter Smedley with ornamentation by the Conkling-Armstrong Terra Cotta Company. Peck was among the hospital’s founders and served as the institution’s first physician-in-charge. The new maternity ward emerged as a sign of the hospital’s augmented capacity for care and West Philadelphia’s rising population. According to descriptions in the medical journal Modern Hospital from 1918, the building was placed into Belmont’s surroundings described as “a residence section of the city where there is plenty of open space, free circulation of air, relief from the sounds of heavy traffic, and an absence of odors and other unpleasant features commonly associated with built-up neighborhoods of almost every large city.” 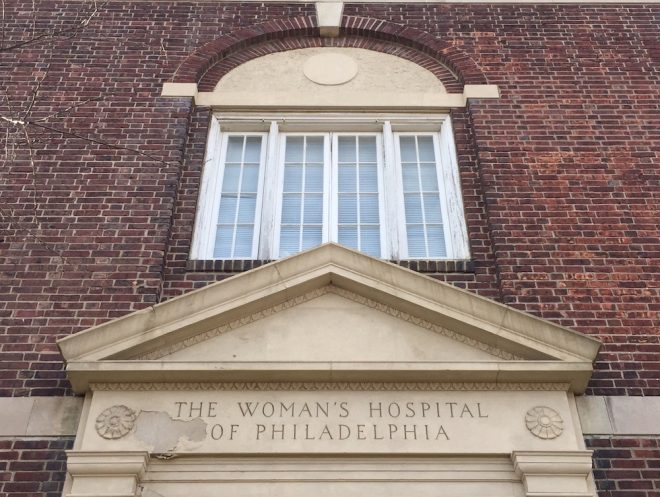 The hospital’s importance to Philadelphia was substantiated by its rising annual birth totals, which increased from 21 in 1897 to 315 in 1916. The merger of the Woman’s Hospital of Philadelphia and the West Philadelphia Hospital for Women in 1929 resulted in a change in name, but a continued purpose. The proposed new complex for the Woman’s Hospital of Philadelphia in West Philadelphia called for the demolition of WPHW buildings, but omitted razing the 1917 Peck Maternity ward. The McGaw residence did not appear on a 1930 rendering of the proposed site, but was saved from demolition and underwent alteration in 1931 and 1932 according to building permit records. Despite documented alteration, the building today appears to retain an abundance of its historic character that enables its distinct presence to continue.

The Woman’s Hospital of Philadelphia continued its operation in Belmont until 1964 when it was absorbed into the University of Pennsylvania’s health care system. Most recently, buildings from the hospital’s complex underwent renovation and rehabilitation in 1998 as part of the Philadelphia City Planning Commission’s, Sarah Allen Redevelopment Area Plan, which sought to provide new affordable housing in Belmont, including the reuse of former WPHW building’s as housing for low income seniors and families. As for McGaw’s bespoke brick mansion, 836 N. Preston Street remains a standout in Belmont and is among the neighborhood’s most significant Victorian vestiges. Despite their architectural and historical distinction, the McGaw’s former residence and hospital property are not listed on the Philadelphia Register of Historic Places.