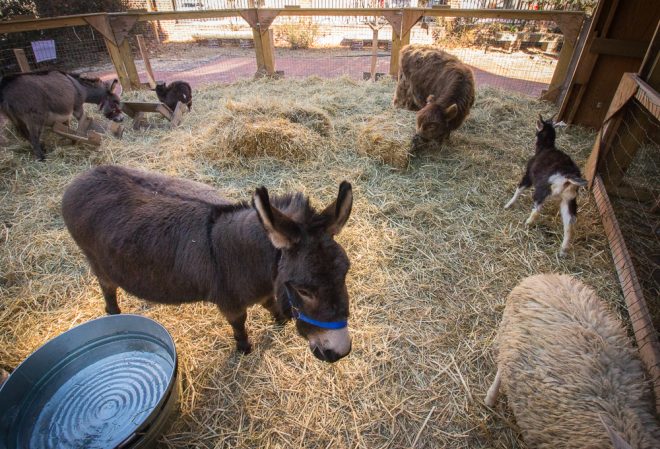 Since 1973, the congregation of Old First Reformed United Church of Christ has presented an annual live animal crèche during the holiday season replete with cows, sheep, goats, donkeys, and sometimes even a camel. Folks from all over make the pilgrimage to see this endearing Christmas tradition at the southeast corner of 4th and Race Streets. The display was originally created to attract visitors to the church, as Old City in the 1970s was still an area filled with abandoned factories and warehouses. Old First Reformed has been associated with this corner of the city for nearly 300 years.

The German and Dutch Reformed denomination developed as a reaction to religious persecution in Germany and Switzerland. The church was founded as a branch of Calvinist Protestant Christianity and was doctrinally based on the Heidelberg Catechism, published in Germany in 1563. This was during the Protestant Reformation, so the faith was shaped theologically by John Calvin and other Reformed theologians.

When the first German Reformed settlers came to America in 1684, the vast majority flocked to Pennsylvania, with most settling outside of Philadelphia in what is now Montgomery County. Falkner Swamp Reformed Church in New Hannover, founded in 1725, is the oldest United Church of Christ congregation in continuous existence. Its present building was constructed in 1790. 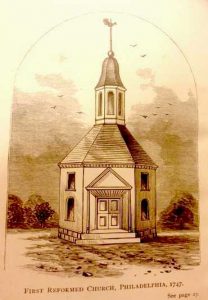 The German Reformed Church of Philadelphia was the earliest of the sect in the city, its origins dating back to 1727. The group’s first pastor, Reverend George Michael Weiss, arrived in Philadelphia along with roughly 400 refugees from the Palatinate area of western Germany. Members worshiped in their homes for two decades before building their first house of worship, a small six-cornered wooden structure in 1747. The church was located at the current location of Old First Reformed at 4th and Sassafras (now Race) Streets. Thomas Penn, one of William Penn’s sons, granted the land to the congregation, perhaps in keeping with his father’s wish that Pennsylvania was to be a Holy Experiment and open to all religions.

According to The Reformed Church in Philadelphia (1876): “This church building must have been of very quaint appearance. It was a stone or brick structure, hexagonal in form, with a hipped-shaped roof, sloping from each of the six sides to the cupola. The cupola was also hexagonal, with an arch-topped narrow window in each side. Surmounting this was a ball, pierced by a rod projecting to quite an elevation, with the figure of a cock, at the top, as a [weather]vane.” Until recently, an outline of this structure appeared as a logo on the church’s website.

It was in this tiny building that the Reverend Michael Schlatter, the church’s second pastor, formally established the German Reformed Church in America on September 24, 1747. He was sent to America to organize the ministers and congregations of the denomination into a synod (or coetus). Old First Reformed was thus one of the mother churches of the United Church of Christ and one of the earliest German Reformed Churches in America. Worship services were conducted in the German language.

The Reformists were not able to include an adjoining cemetery on the site because the area was developing rapidly. The nearest large tract of open land was Northeast Square, later named Franklin Square. A few years before, in 1741, Thomas Penn granted a portion of the eastern half of the square to Old First Reformed for 100 years later, in 1835, the Pennsylvania Supreme Court ruled that this conveyance of public land was invalid, as the city was seeking to return the square to recreational use exclusively. The Reformists were ordered to move the bodies and vacate the park. Most graves in Franklin Square were moved, but some remain to this day. Several early ministers of Old First Reformed likely remain under Franklin Square. According to documentary sources, the headstones were merely laid down on top of the graves and covered with soil. A commemorative plaque in Franklin Square marks the burial site’s general location. 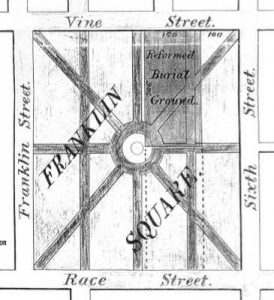 The primarily German congregation received a charter from John Penn in 1765 that recognized the church as a corporation entitled to own property and receive income, among other rights. The modest six-sided church building served its purpose well, but the building was much too small for the growing congregation by the 1770s. A 148-foot-deep lot adjacent to the church was purchased in 1749, offering 60 additional feet along Race Street. This afforded the congregation all of the ground on the southeast corner of 4th and Race Streets all the way to Orianna Street (formerly Sterling Alley and Hillsdale Street). A new building was designed by Robert Smith, the most prominent architect and builder in Colonial America. On May 1st, 1774, Old First Reformed’s second building on the same site was dedicated in the presence of Governor John Penn and English and Lutheran ministers, as well as a large assembly of Philadelphians.

The pastor at that time was Dr. Caspar Weyberg, who preached to Hessian soldiers during the British occupation of Philadelphia, boldly advocating for the patriot cause. As a result, the British threatened his life and threw him in prison. On September 17, 1777, British forces occupied the new church building, using it as a hospital and stable, while the congregation moved to an adjacent schoolhouse.

On May 4, 1786, almost 1,000 people came to see 280 performers in the “Grand Concert of Sacred Music,” then the largest musical gathering in America. The new University of Pennsylvania performed its commencement exercises there, and the Society of Cincinnati held a memorial service for George Washington in the church in 1800, shortly after Washington’s death. In 1828, the prominent revivalist Charles Finney preached a series of sermons in the church, which was still one of the largest auditoriums in the city. He wrote that the building was the largest church in Philadelphia and could easily seat 3,000 people. Moreover, Reverend Finney succeeded in introducing the English language into services, exclusive of German. English has been used in worship and in most church records since 1830.

Growing traffic noise on Race Street and the 1774 building’s deterioration prompted the congregation to build a third church on the same site, using timbers from the older house of worship. Old First Reformed’s third church was dedicated on March 4, 1837. It had the same dimensions as the second church, but was rotated 180 degrees and set back farther from the Race Street in an effort to reduce noise from the street. This is the building that is currently at 4th and Race. 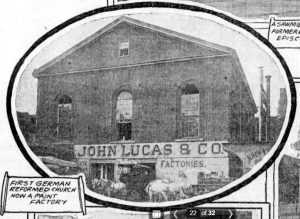 A photo of Old First Reformed Church when it was a paint warehouse for John Lucas & Company. From the May 27, 1900 issue of The Philadelphia Times. | Source: Newspapers.com

Since the church had to give up its burial ground in Franklin Square about two years before the 1837 dedication, the architect included 18 burial crypts, accessible through the basement, in the new church’s design. A member of the congregation could buy a crypt for $300 and have space for several family members. Some crypts were earmarked as temporary storage for cadavers when icy weather made the ground at other cemeteries too hard for digging. Members could also store a body in these temporary vaults for free for a month. They were charged five dollars if they did not move the corpse after 30 days.

Old First Reformed found itself in an untenable situation by the 1870s. Old City was becoming increasingly industrial and no longer supported a large number of German residents who would attend services. These changing neighborhood conditions led the congregation to sell the building to the Lucas Paint Company in 1882 and move to North Philadelphia. All of the bodies in the crypts were removed to West Laurel Hill Cemetery. Chasing its members, the church later moved to West Philadelphia.

Lucas Paint Company operated independently until 1930, when it was acquired by Sherwin-Williams. The house paint conglomerate remained at 4th and Race Streets until 1967, when Old First Reformed, faced with declining membership in its West Philadelphia location, bought back its former church building from the Philadelphia Redevelopment Authority. The agency had invited the congregation back to its original building.

While some members of the church did not want to travel downtown to Old City, the majority of the congregation voted to move back to their original location, inspired by the thought of ministering in the heart of the city. The congregation worked to restore the worn and shabby structure to its 1837 appearance, providing sweat equity and personal loans to finance the restoration. During renovations, members had to climb though a window to attend worship services. The burial crypts had remained on premise, however most were damaged and empty. The church was rededicated in 1969. 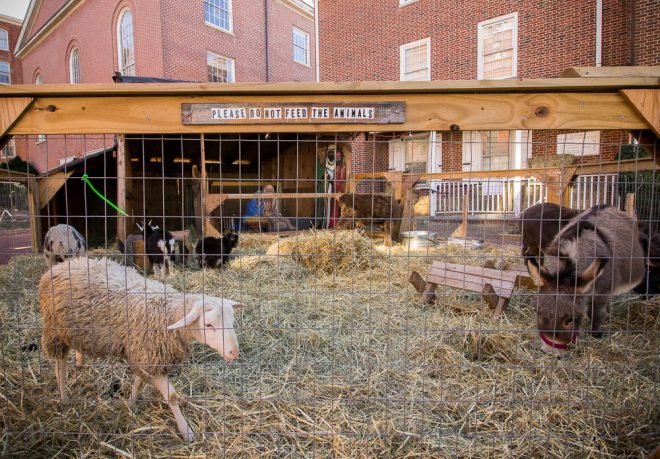 Have livestock, will travel. This year’s holiday barnyard is courtesy of Party Animalz in York County, Pennsylvania. | Photo: Michael Bixler

Today, the congregation of Old First Reformed United Church of Christ is committed to a mission of community service and membership diversity. The annual live-animal crèche succeeded in attracting visitors to the church, and the congregation has grown from around 100 to almost 300 members in the decade following the rededication. Timbers from the demolished Lucas Paint Company buildings located around the church yard were used to create the first manger in 1973; the congregation still uses some of the old timbers to this day. The animals are typically borrowed from a farm and traveling pet zoo and generally stay for two or three weeks where they are joined by life-sized mannequins and nativity reenactors on Christmas Eve.