An Architectural Graveyard At Independence Mall

When Independence National Historical Park was formally established on July 4, 1956, civic boosters believed the park would make Philadelphia significant again; national observers, at the height of the Cold War, imagined the physical manifestation of American ideals would heighten feelings of patriotism. In any case, as the urbanist writer Lewis Mumford pointed out in the New Yorker, the city’s vast collection of buildings related to the founding of the nation were in such disrepair as to imply complete neglect, “symbolized by the fact that the house of President Madison had become a ragpickers’ headquarters.” It was about time, he said, that the “scattered treasures” be restored to “stimulate the imagination of those who visit them to consider the great events.” The question was how—should all the built-up, mostly 19th century, clutter be stripped away so make this stimulation rather easy and obvious? (Mumford thought not.)

But the planners of INHP did and their vision for the park—defined by restored and simulated 18th century buildings—came at a considerable cost to the historic fabric of the surrounding area, the city’s original, Victorian-era Central Business District. Some of the greatest commercial architecture Philadelphia has ever seen, spanning three square blocks, was eliminated for the grassy expanse of Independence Mall. Of all the buildings that met the wrecking ball, the Irvin Building, by far the largest one demolished, was actually a hybrid of two 20th century designs. Having anchored the corner of 4th and Walnut until 1974, the Irvin Building was one of the last legacy buildings to be removed. 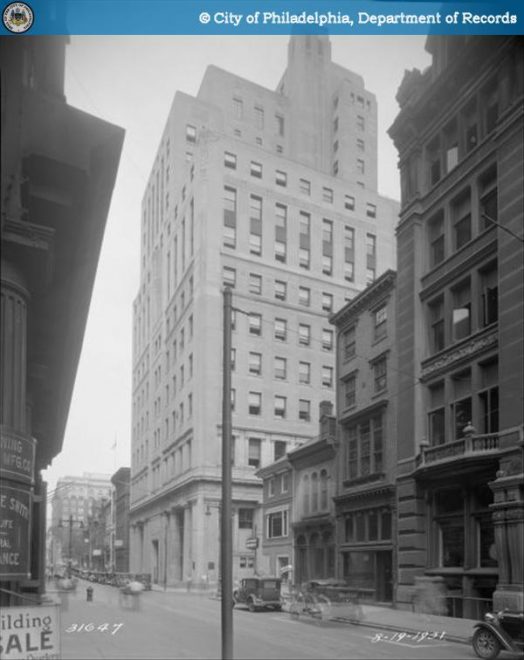 The story of Irvin Building begins with the Fire Association of Philadelphia. The organization was founded in 1817 as an alliance between five volunteer hose companies and 11 volunteer engine companies created to work together and settle disputes. This was not the first organization of this type in Philadelphia, but it was the only one to endure. In addition to organizing volunteers, the association also provided a primitive form of fire insurance, which was a fairly new concept at the time. The group first met at Caleb Camault’s house at the corner of 3rd and Tammany Streets, interestingly the site of current Fire Department headquarters. With membership growing, the association relocated to Carpenter’s Hall. More fire companies joined the association with thousands of row houses being underwritten for protection. The Fire Association moved to an office near 5th and Arch Streets and then its own three-story building in Northern Liberties.

In 1871, the City created its own official Fire Department, eliminating the need for volunteer companies. The Fire Association then made insurance policies their primary objective and became a joint stock company on May 5 of that year. By 1890, the company was doing so well that it began planning for a new headquarters to be located among the other underwriting companies along Insurance Row, the 400 block of Walnut Street.

The Fire Association commissioned Philadelphia architects Hazelhurst & Huckel for a handsome four-story office building with a stone façade and a large copy of the company’s fire stamp emblazoned along the cornice. The growth of the Fire Association was so great that by 1910, only 20 years later, larger quarters were required.

The Fire Association acquired the properties directly adjacent, 401-405 Walnut Street and 142-48 South 4th Street, and commissioned Philadelphia architect Edgar V. Seeler to design a six-story, 35,000 square foot building that would serve the company, with plenty of room for growth. Fire Association officials sold the original 407-09 Walnut Street headquarters to another Insurance Company thinking they would never need it again.

When the new building was complete in 1912, the Fire Association leased extra space to smaller insurance outfits like the Hartford Steam Boiler Inspection and Insurance Company. 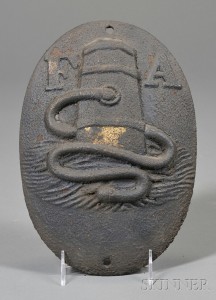 Firemark of the Fire Association of Philadelphia. | Source: Skinner Auctioneers

But that didn’t last very long. In the following two decades, the Fire Association expanded its territory from Philadelphia up and down the East Coast, acquiring smaller insurers, expanding services beyond fire insurance, and forming subsidiary companies that eventually occupied nearby insurance buildings. Many offices had become available due to the west migration of firms in the city’s core office district across Broad Street.

By 1928, while thousands of companies in the United States were folding, the Fire Association of Philadelphia sought a bold expansion. The firm acquired the old Presbyterian Minister’s Fund building at 140 South 4th Street, the old headquarters building at 407-09 Walnut Street, and the stunning Imperial Building at 411-413 Walnut Street (which was occupied by their auto insurance subsidiary Reliance Insurance). The Fire Association then narrowed in on constructing an immense addition to its headquarters in order to house the entire company and subsidiaries.

Building manager Thomas Higgins was put in charge of the overhaul. He commissioned little-known architect Ernest Matthewson for the herculean task of designing a seamless and expanded addition to the original 1912 building. Matthewson honored the façade of the original building by repeating it on the first six floors for the additional sections. For the floors above that, he changed the design to a muted Art Deco face with setbacks on the 10th and 14th floors. The building was raised to 17 stories.

Matthewson is a mysterious character in the world of Philadelphia architecture. His only two skyscrapers are within a couple of blocks from each other and were both large additions onto smaller buildings designed by Edgar V. Seeler—the Irvin Building and the 1930s addition to the Penn Mutual Life Insurance building at 6th and Walnut.

When competed in 1930, the company was so happy with the final product that they sent Thomas Higgins on vacation as a bonus for this great work. They named the redressed building after Elihu C. Irvin, president of the Fire Association from the 1890s to the 1920s. 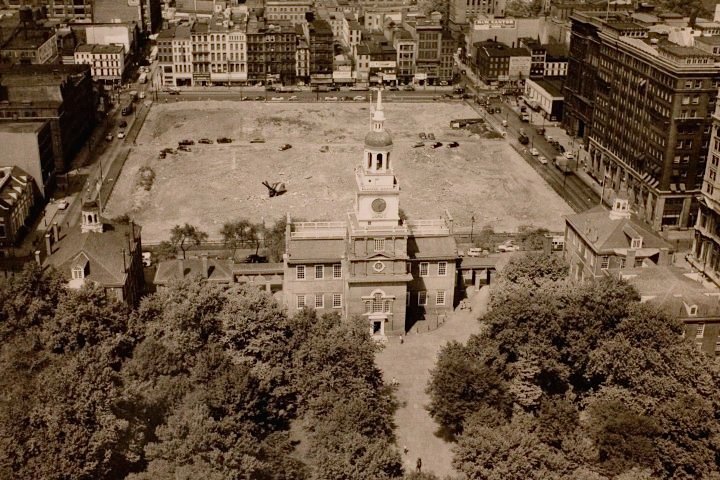 All of the companies under the umbrella of the Fire Association merged into one unit in 1950. In 1958, the Fire Association of Philadelphia changed its name to Reliance Insurance Company after one of the former subsidiaries. In 1965, the consolidated company went looking for a larger headquarters and eventually settled into the newly-built 4 Penn Center at 16th Street and JFK Boulevard.

Reliance retained ownership of the Irvin Building and leased it out to other companies, namely the Chilton Book Company. Shortly thereafter, plans for a full upgrade and finishing of Independence National Historical Park in anticipation of the Bicentennial began. At this point much of the park was still not complete. The Irwin Building and several other smaller office buildings from various eras were still standing on Walnut and 4th Streets.

Reliance executed an option agreement with the Federal Government for the acquisition of the buildings for $3,250,000. By the early 1970s, the rest of the “non-conforming” (to 18th century) buildings were demolished, but the Irwin Building, which was earning its keep by providing extra funds to the park’s budget through office leasing. However, it was finally razed in 1974 and its site has been a model 18th century garden ever since.