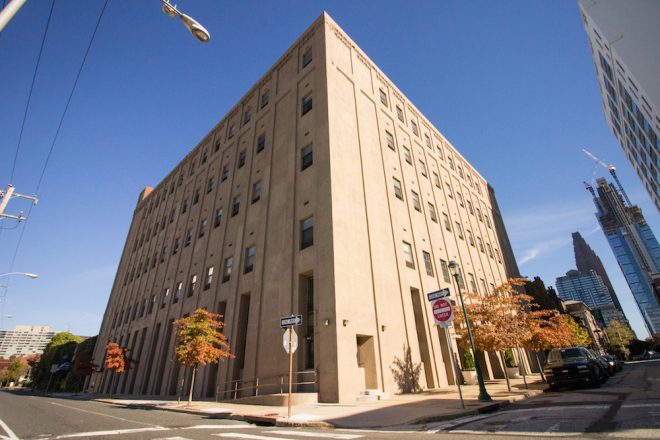 Westminister Arch at 23rd and Arch Streets was a catalyst of residential redevelopment in this historically industrial section of Logan Square when the former Atlantic Works factory was converted into an apartment building in the early 1980s. | Photo: Michael Bixler

The Westminster Arch apartment building at 2215 Arch Street in Logan Square is one of a small handful of physical reminders that this serene neighborhood was once part of the complex web of high skill manufacturers and machine tool shops that extended, more or less, from Arch to Spring Garden, the Schuylkill River to Broad Street. The 125-year-old former tool, typewriter, and medical supply factory, converted into an apartment building in the early 1980s, stands as an enduring example of visionary adaptive reuse.

Atlantic Works was a fledgling manufacturer of woodworking tools and machines in the mid-19th century. The company changed ownership every few years until Lucien Berry and Lyman Orton took the helm in 1888. Under their direction, Atlantic Works quickly solidified a reputation as one of the top firms of its type in the country. By 1890, the company had outgrown its small building on the 100 block of North 22nd Street and Berry and Orton began planning to relocate its manufacturing operations.

Berry & Orton acquired a large old coal yard property nearby facing 23rd, Arch, and Filson (now Croskey) Streets. Their original blueprints called for a hulking five-story, L-shaped plant that would stretch along 23rd Street. By the time the factory was under construction in 1891, final designs reduced the main building’s footprint, with the bulk of the factory mostly facing Arch Street. A small engine and boiler house was installed on the rest of the large property. Like other industrial buildings in the neighborhood, the new Atlantic Works factory had a direct freight rail connection that ran from the building to the train yard across the street.

Berry & Orton sold the Atlantic Works building to the National Typewriter Company five years later. The NTC, used the same inaccurate rendering of the factory in its promotional materials. NTC, too, stuck around for only half a decade. 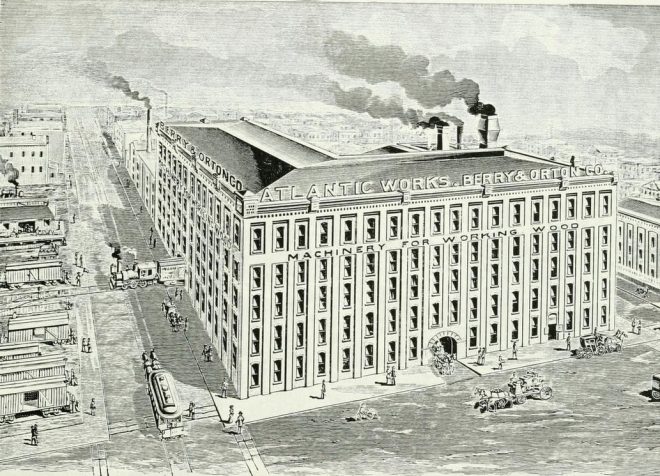 Rendering of the original, full-size plan for Berry & Orton’s Atlantic Works. The factory was considerably smaller upon completion. | Source: Philadelphia and Popular Philadelphians

George P. Pilling & Son, manufacturers of surgical instruments and hospital supplies, occupied the factory the longest and is the company most commonly associated with the building. Pilling & Son was in business for roughly 90 years when it moved into the 10-year-old building. The firm’s success on Arch Street led to an addition on the northern side of the building in 1908, bringing to fruition Berry & Orton’s original design for the building.

Pilling & Son supplied everything a doctor, surgeon, hospital, or medical student would need. The company produced every type of needle, scope, retractor, mallet, rongeur, drill, specula, forcep, probe, suction cup, and pump. Workers there even made hearing tests, doctor’s office furniture, and home-visit bags. In 1932, the company opened a medical supply store on the ground floor of the factory.

In 1935, Pilling & Son commissioned the local architecture and engineering firm Ballinger Company to design an entire reconstruction of the façade with steel supports, likely due to a structural issue with the exterior of the older section of the building.

In the 1940s, the property was acquired by the enterprising Kardon family. The serial entrepreneurs purchased the old Atlantic Works building under their industrial realty and management firm, Blems Corporation. The American Friends Service Committee used the first floor for offices while the upper floors took on a variety of light manufacturing uses. 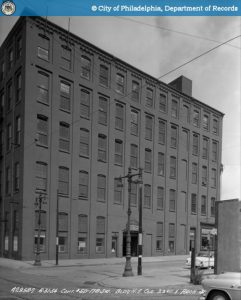 The former Atlantic Works plant in 1954 with a façade closer to what it looks like today. | Source: PhillyHistory.org

By the start of the 1970s almost every floor in the building was being used for back office storage. In a bold move at the time, the Kardons pulled permits for a total residential conversion of the factory for 101 apartments. The area was not the quaint residential district it is today; rather it was full of empty lots, blight, active manufacturing plants, and small warehouses with just a smattering of old and new row houses blocks away. The building’s conversion stalled, although demolition of a small two-story Atlantic Works boiler house and engine section of the building was completed in 1973. Builder Alfred Waber, under the name Westminster Associates, took up the endeavor when he purchased the building for $250,000 in 1978.

The architecture firm Stephen M. Goldner Associates completed the residential conversion of the old Atlantic Works with 90 apartments in the early 1980s. Although the factory’s façade looks much different today than it did when the building was last altered, Westminster Arch retains a certain degree of restrained elegance that doesn’t entirely obscure its manufacturing past.