When Cattle Men Reigned In The West 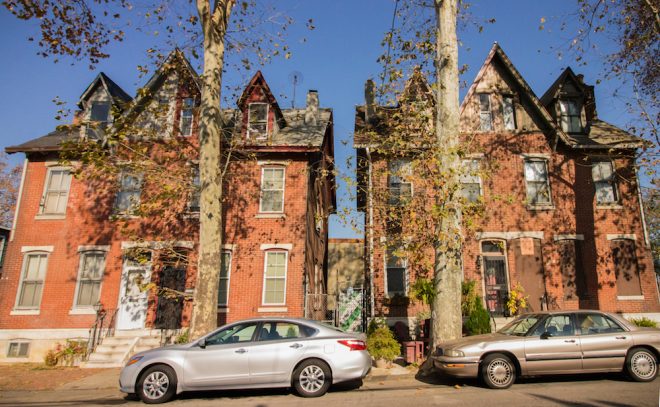 Irish cattle drover Dennis Smyth was a stockyard entrepreneur with a knack for real estate. These two sets of twins at Aspen and Pallas Streets in West Philadelphia were once part of Smyth’s speculative home portfolio. | Photo: Michael Bixler

Two semi-detached Gothic-revival houses stand with angular grace on the east side of Aspen and Pallas Streets in West Philadelphia. Their steeply pitched, center-gabled roofs are flanked by dormers containing what are likely original, double-hung sash windows. These architecturally nuanced houses recall a design aesthetic that shaped Philadelphia and countless other industrializing American cities after the Civil War. The refined details found here, like marble lintels, sills, and water tables, were most common in Philadelphia around Rittenhouse Square. These particular buildings are the last vestige of a half-block estate owned by cattle drover and broker Dennis Smyth, one of the many relatively unknown leaders of the droving economy that was centered between present-day 30th Street Station and Belmont Avenue during the second half of the 19th century.

Smyth was born in 1825 in Drumsallyn, Ireland and emigrated to the U.S. in 1853 from Dublin. By 1860, as one of many Irish Catholic newcomers to West Philadelphia, Smyth established a foothold after acquiring three parcels of land spanning the western half of the block bound to the north and south by Brown and Aspen Streets, and the east and west by N. 43rd and N. 44th Streets. Land and an existing dwelling were acquired between 1865 and 1867 in separate acquisitions from lawyer Furman Mayhew and British merchant James McHenry who was residing in London at the time. Smyth moved into the preexisting structure at 755 N. 44th Street in 1867. Despite an absence of building permits and yet to be uncovered fire insurance surveys, historic atlases show the residence was located about halfway between Brown and Aspen Streets and fronting N. 44th Street. In addition to a large contingent of drovers living in the blocks north of Haverford Avenue and west of Lancaster Avenue, a notable number of butchers and other laborers found homes near the avenue. Smyth joined those members of the trade and commuted to local drove yards that connected drovers to the rail systems that brought in and sent out the cattle. This system defined their livelihood, head-by-head. 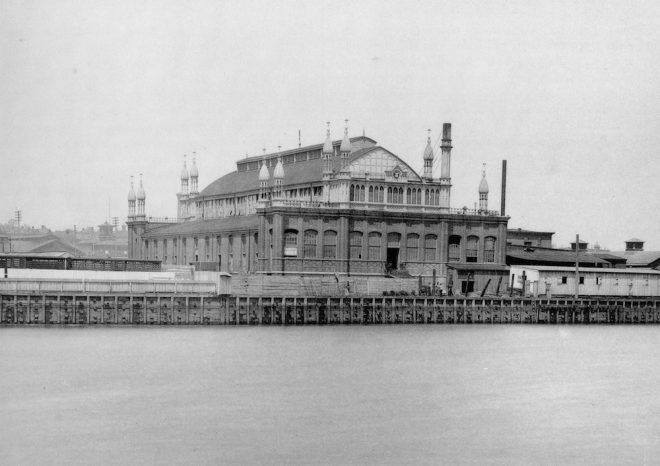 Abattoir of Philadelphia Stockyard Company was built in 1885 and designed by architectural firm Wilson Brothers & Co. The slaughterhouse occupied close to 21 acres north of Market Street on the west side of the Schuylkill River. | Image courtesy of the Athenaeum of Philadelphia

Around two-thirds of incoming cattle were raised in Iowa, Illinois, and Indiana prior to shipment to Chicago and Pittsburgh. Speculators westward set initial prices before drovers-turned-brokers like Smyth negotiated for an opportune transaction. Market reports from 1870s list Smyth purchasing cattle from additional markets in Virginia, Western Pennsylvania, and nearby Lancaster County. Philadelphia may not have been as central to the meat industry as Chicago, but the journey from the Midwest, to the midway, to the Mid-Atlantic places West Philadelphia’s drovers into a nationally significant historic context.

Proximity to Lancaster Avenue was key, as the northwest-southeast artery provided drovers with the closest access possible to the city’s markets. The industry had only emerged in West Philadelphia after being pushed from fringes east of the Schuylkill River in decades prior as residential development expanded beyond the old city’s bell-shaped center. Prior to the mid-1870s, the closest cattle yard to Smyth and neighboring drovers was the Avenue (later Union) Drove Yard located at the intersection of Lancaster and Westminster Streets, just three blocks north of Smyth’s house on N. 44th Street. Smyth’s career followed the trajectory of the Pennsylvania Railroad Company in the respect that Smyth’s apparent prowess within the cattle industry kept pace with the PRR’s influence on the transportation of cattle in and around Philadelphia. The PRR’s complex where 30th Street Station now stands was fully operational by the time Smyth began merging his gains in trade into investment in real estate around 1880. In the decade leading up to the construction of Smyth’s three rental properties, the Hestonville Drove Yard, representing the merger of the Avenue and Union drove yards around 1869, was the epicenter of day-to-day cattle moving and brokerage in West Philadelphia. 1,500 to 2,500 cattle changed hands every Monday morning as butchers within a thirty mile radius of Philadelphia trekked to Hestonville to join drovers, cattle inspectors, and even vendors of ice cream, soap salesmen, dry good peddlers, and oyster wagon-hauling purveyors in a frenzy of activity. The drove yard was not simply a dusty urban pen, tamped solid from thousands of hooves. Rather, it was the center of commerce and social activity, since wiped off terra firma, yet immortalized on old atlases. 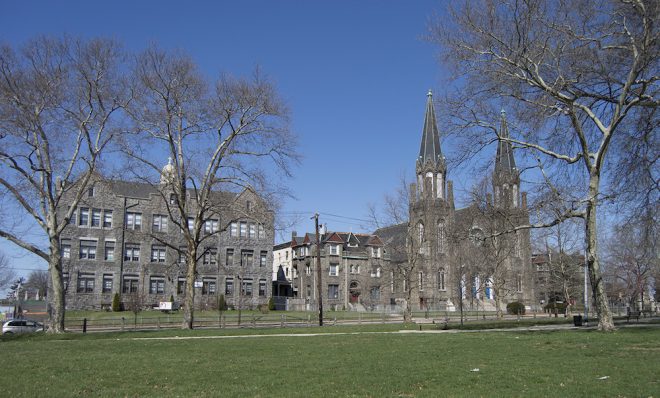 Over the course of three decades, Smyth succeeded in his operations at Hestonville. He eventually built three semi-detached twins between 1880 and 1886, satisfying his ground rent agreement with James McHenry while providing a source of additional income to his family. Smyth’s wealth, however, was not entirely tied to his land or his rental properties that were leased out to incoming middle class residents. It is unknown who designed the semi-detached houses at 4317/4319, 4321/4323, and 4325/4237 Aspen Street, but it is likely Smyth relied on local builders to follow plans designed by a favored architect.

In addition to trading cattle and managing a small portfolio of income properties, Smyth contributed a great deal to his local parish, Our Mother of Sorrows Catholic Church, at 48th Street and Lancaster Avenue. Beyond the yard, Smyth and his many contemporaries within an emergent Irish-Catholic population in West Philadelphia founded a community center at Our Mother of Sorrows during the last quarter of the 19th century.

Our Mother of Sorrows was designed by the prolific ecclesiastical architect, Edwin F. Durang, and constructed as the parish’s budget permitted, between 1868 and 1872, by local West Philadelphia builder James Boyle and a team of Philadelphia masons. Durang returned in 1892 to add landmark north and south spires that remain visible from approaching Market-Frankford El trains and from various points in neighborhoods surrounding the church. The spires followed the construction of Our Mother of Sorrows School and several accessory buildings in the 1880s that saw the completion of the Catholic complex by 1895. 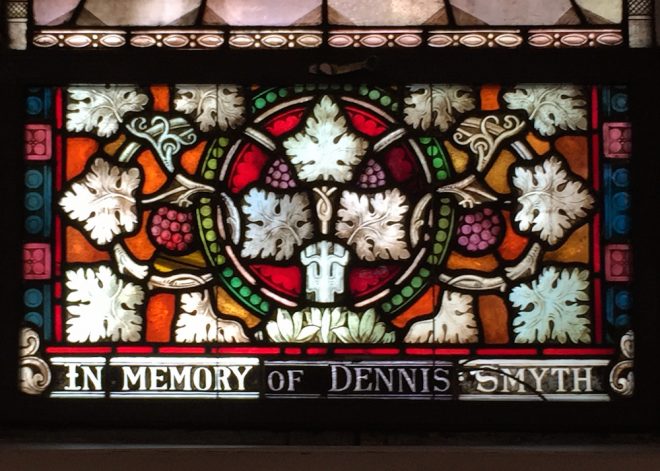 Although Smyth requested a modest grave marker in his will, parishioners at Our Mother of Sorrows memorialized his generosity and deep involvement in the church with this stained glass panel. | Photo: Joshua Bevan

Parish records indicate that Smyth was among top contributors to the church until his passing in 1892. Smyth consistently contributed over $20, easily eclipsing the small-change donations of fellow parishioners. Moreover, Smyth’s eldest son, William, served as a collection taker for the church. The Smyth family was among the most prominent of the Irish-Catholic families that saw the Durang-designed church expand into a larger Catholic complex between its completion in 1872 and the beginning of the 20th century. In those years, Our Mother of Sorrows served not only local congregants, but achieved further significance as a place for temperance meetings during the Centennial Exposition of 1876 and, thereafter, as a center for Catholic education.

Smyth was humble despite his gains in the cattle industry, as he directed, “My body to be interred in the lot at Cathedral Cemetery…and that my funeral to be conducted in a plain manner, without any parade or needless expense, and that no monument shall be erected over my grave, as I consider a simple head and foot stone all sufficient.” After Smyth’s passing, his wife and two eldest children took over managing Smyth’s real estate interests. In 1895, speculators purchased the Smyth tracts, demolished his house, and subdivided the land into more than 40 lots for row houses. 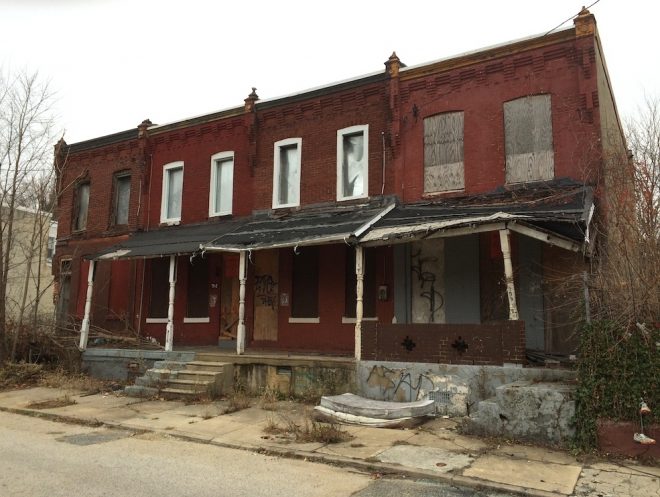 A new chapter in West Philadelphia’s development was well underway. The PRR’s stockyards at 30th and Market Streets along the Schuylkill River were by then the locus of the Philadelphia meat industry.

In the decades following the Great Migration brought African American residents from the South (a majority from Georgia, Maryland, Virginia, and South Carolina) seeking industrial employment and a life free of Jim Crow. The two surviving buildings linking back Smyth’s era are markers of a larger cultural landscape. The relationship between Our Mother of Sorrows, Smyth, and the history of the cattle industry provides one compelling example of the narratives that connect Philadelphia’s neighborhoods architecturally, socially, and, in many cases, spiritually. We are challenged to preserve these resources as evidence of West Philadelphia’s development. As a neighborhood anchor for over a century-and-a-half, Our Mother of Sorrows parish remains in partial operation, seeking, as many sacred places across Philadelphia, a full-time use to ensure its continued existence.