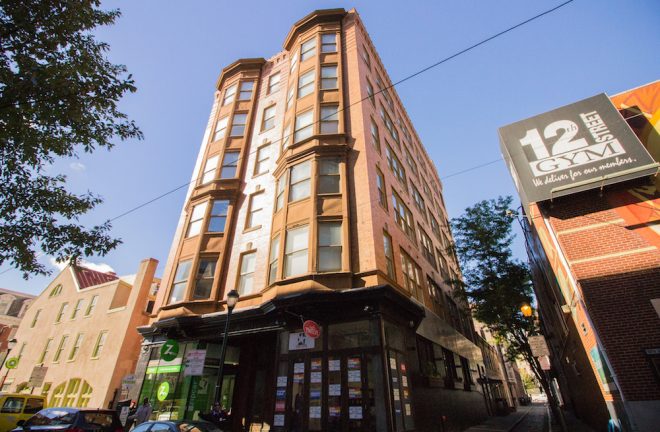 No shortage of natural light at the Jewelers’ Building. The terra cotta bricked façade and cast iron base was scrubbed up and retouched in 2004, restoring its original glow. | Photo: Michael Bixler

Blocks away from the trappings of Jewelers Row, the century-old Jewelers’ Building, at 12th and St. James Streets, showcases a double set of bay windows, terra cotta brick, and a cast iron base—an architectural diamond perfectly set in its location. “Jewelers’ Building” above the entrance is the only indication of its history.

Franz X. Zirnkilton was a goldsmith from Passau, Bavaria who came to Philadelphia in 1875 in advance of the Centennial World’s Fair in 1876. He started his own company in 1880, creating some of finest jewelry in town. Zirnkilton was held in high regard in Europe and earlier in his career made jewelry for Austrian nobility. In Philadelphia his customers were kept secret, but were rumored to be some of the wealthiest families in the world. Zirnkilton’s marketing gimmick was that he never advertised, giving the appearance that he was so exclusive that he need not bother with gaudy self promotion.

By 1911 F.X. Zirnkilton jewelry was in high demand. At this point, Franz’s sons, Franz Jr. and Carl, operated the business under their father’s model. To announce themselves to the world the brothers acquired three the three old row houses at 214-218 South 12th Street and commissioned well-known Philadelphia brewery architect Otto Wolf to design a $75,000 workshop and storefront.

With its tall bays exploiting the corner lot, the Jewelers’ Building was complete later that year under the direction of construction contractor A. Raymond Raff. Franz Jr. and Carl tucked the F.X. Zirnkilton store into the 4th and 5th floors with their manufacturing and storage operations. The rest of the building was leased to other businesses, but none of them were jewelers. Tenants over the next couple of decades included printers, textile concerns, advertising agencies, and a record company. 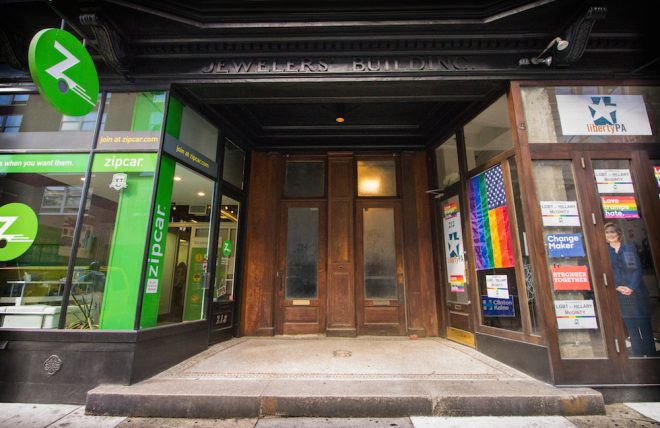 Zipcar fills the retail space on the left for company offices while a Hillary Clinton campaign office has temporarily taken over the space closest to St. James Street, the former location of Cafe Twelve and a host of other coffee shops throughout the years. | Photo: Michael Bixler

The firm of LaWall and Harrison, chemists, occupied part of the building in the 1930s. The company tested products for government agencies and conducted quality control studies for food manufacturers, devising their own methods for testing, many of which became standard practice for food scientists of the era. LaWall and Harrison created the procedure used to test whether foods labeled “smoked” were actually smoked. They were also responsible for one of the many color scales used to determine the grade of certain spices.

Shortly after the Zirnkiltons were featured in the Saturday Evening Post in 1955, Johnson & Prince Inc., a printing and graphics company, leased the 2nd and 3rd floors of the building. In 1971 the company bought the Jewelers’ Building. Johnson & Prince stuck around until the 1990s before moving to New Jersey.

In 1998, the whole building was vacant with the exception of the the retail spaces on the ground floor. Launching a strategy to revitalize the core of Center City east of Broad Street, the real estate developer Tony Goldman purchased the Jewelers’ Building. The building’s floor plan and windows made it ideal for residential conversion and Goldman Properties turned the upper floors into apartment units in 2002. Upon completion, the firm sold the place to a group of real estate investors. The real estate group, now known as Astoban Investments and UrbanSpace Development (depending on the service you require of them), converted the building to luxury condominiums in 2004, paying careful attention to period-appropriate finishes and materials to accentuate the building’s history and prominence.

Over the years a rug dealer, a repair shops, and a palm reader have occupied the two storefronts. Beginning in 1993, the northern space has been occupied by a coffee shop, first Millennium Coffee then Brew Ha-Ha. Most recently it was called Cafe Twelve. The space is now temporarily in service as a Hillary Clinton campaign office. Zipcar’s brick-and-mortar location takes up the other storefront.

Examples of F.X. Zirkilton’s jewelry can be viewed at the Philadelphia Museum of Art and some old Zirnkilton pieces are for sale through Freeman’s Auction House.