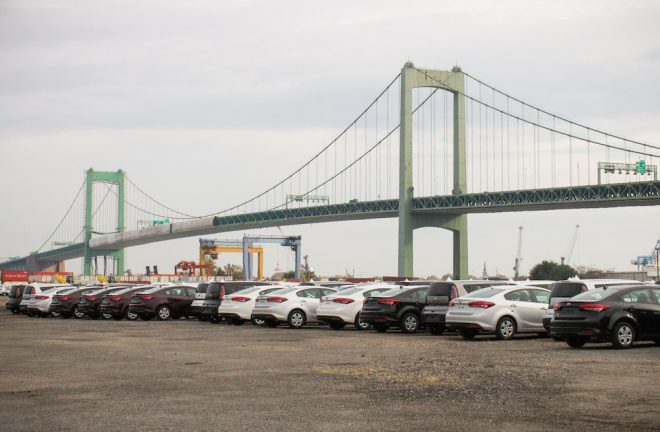 Between 1987 to 1988 the EPA took emergency actions to clean up the ethanol production site of Publicker Industries, a former whiskey and industrial alcohol distillery turned fuel refinery. Today it is used as a parking lot for Kia imports. | Photo: Michael Bixler

As the Philadelphia Regional Port Authority considers proposals for the Southport Marine Terminal on the far east end of the Navy Yard south of Packer Avenue Marine Terminal, powerful advocates would like to turn it into a fossil fuel export hub (a proposal that seems all the more likely with the election of the anti-environment, anti-regulation Donald J. Trump as President). But the history of a nearby site, the former Publicker Industries’ ethanol plant, directly north of the Walt Whitman Bridge, is a cautionary tale that should only discourage the prospect of siting a potentially hazardous industry on Philadelphia’s southern waterfront.

While the City Office of Sustainability should have some say over the decision to use the site as a fossil fuel export hub, the latest version of its Greenworks Plan highlights reduced energy use and Philadelphia’s role as an intervener in support of the federal Clean Power Plan, but does not mention previous and ongoing industrial proposals for Southport that ultimately drive greenhouse gas pollution and ground-level-ozone (smog).

There are many former industrial sites across Philadelphia to make this case—and many remain in limbo, with regulators wary of lingering hazardous waste and developers looking for the right price—but the story of the former Publicker Industries site, once deemed by the Environmental Protection Agency to be the most concentrated waste disaster in the Mid-Atlantic region, may serve as the most powerful warning. At present it is used to park unpainted, imported cars. In 1997, the EPA announced that the remediated site, “would be put back into productive use as a multi-purpose shipping terminal.” But this prediction never came to fruition.

Before oil ousted coal as the nation’s main fuel source in the early 20th century, ethanol was widely used. The original Ford Model-T was made to run on it, but ethanol production was banned during prohibition and had difficulty recovering. Ethanol re-entered the energy market as Chicago food processing company Archer Daniels Midland was scrambling for a buyer of its high fructose corn syrup by-product in the mid-1970s. Ethanol’s incorporation into commercial gasoline paralleled the removal of lead with both additives used to increase combustion while protecting engines. The anhydrous ethanol Publicker began producing to mix with gasoline was manufactured in a converted plant originally used to make power alcohol for aircrafts during World War II. 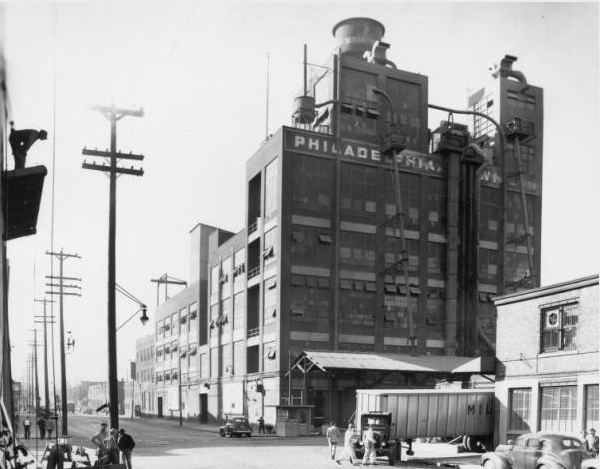 Publicker started manufacturing liquor and industrial alcohols in 1913. The company survived the death of it’s founder Harry Publicker in 1951, but when his successor Simon Newman died in 1976, Publicker was $39 million in debt. Under Newman’s leadership, the company lagged behind its competitors, only ceasing molasses fermentation when trade with Cuba was embargoed in 1960, leading to the idling of its power alcohol plant in 1961. With the remaining Publicker family fighting over control of the company, the same plant would be put back to work producing ethanol in the midst of the U.S.’s second energy crisis of the 1970s, driven by the 1979 Iranian Revolution and surrounding speculation on the availability of imported fuels.

In 1979, Publicker inquired about purchasing 200,000 tons of sugar originally held as collateral for a government loan to cane growers two years prior. The sugar was now government property and Publicker was looking for a deal, but it never went through. Soon after, President Carter, embargoed 17 million metric tons of grain to be exported to the Soviet Union in response to the USSR’s invasion of Afghanistan. The administration purchased the grain, including five million tons of corn ripe for ethanol production, for $2.25 billion.

In 1980, the DOE gave the tanking Publicker Industries $25 million to build a new ethanol plant on its existing site. In 1984, Publicker, anticipating the 1985 closure of its Philadelphia plant, won a Florida Supreme Court Case allowing a four-cent-per-gallon tax exemption to be applied to imported ethanol. In 1986, Publicker sold the plant for $3 million to the Cuyahoga Wrecking Company. Soon after two workers salvaging the plant were killed in an explosion. The next year a fire set by an arsonist, punctuated by explosions and plumes of heavy smoke, would eventually lead the EPA to declare the site a hazardous waste disaster costing $36 million in cleanup, only made possible by Carter’s own Comprehensive Environmental Response, Compensation, and Liability Act of 1980. CERCLA (or Superfund) created the country’s first-ever program to clean industrial sites contaminated with hazardous waste. 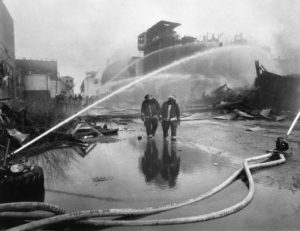 The $25 million loan the newly minted Department of Energy gave the rapidly aging Publicker Industries is a mystery at best and more likely a frightening example of late-industrial confusion. There are conflicting reports of whether Publicker’s federal loan was intended to fund a 60 million gallon-a-year ethanol plant on their property between Packer Avenue and Bilger Street, whether it was for a joint venture with Ashland Oil in Southpoint, OH, or if it was simply funding their existing 18 million gallon plant. By 1982, the Government Accountability Office had found that the DOE had erroneously advanced $3 million in ethanol research grants across the country.

In 1995, Publicker began paying the $14 million penalty levied by state and federal regulators to recoup the cost of removing the overwhelming amount of dangerous chemicals left at the site. The EPA removed two million gallons of hazardous waste several hundred miles of private pipeline, and 440 tanks and drums.

36 years after President Carter made funding for environmental disaster cleanup available, a fuel plant in a floodplain remains ill-advised and on-the-table. Philadelphia is lucky to have city departments willing to come out against proposals like the Elcon hazardous waste boiler in Southern Bucks County as well as organizations like the Philadelphia Regional Port Authority. The PRPA’s own $150 million loan turned a property off of Essington Avenue in Southwest Philadelphia from an illegal dump to the “world’s largest refrigerator,” the Philadelphia Wholesale Produce Market. Opened in 2011, the produce market is a shining example of redevelopment done right.

Russell Zerbo Russell Zerbo has been the advocacy coordinator at the Clean Air Council since 2012. He works with Philly residents to report illegal burning, dumping, and drainage issues. He writes letters to newspapers about coal and other energy issues. He goes to public hearings and helps concerned citizens engage with city agencies, their representatives and environmental regulators. He currently serves on the Philadelphia Health Department's Climate Change and Health Advisory Group and works within the Philadelphia Health and Environment Ethnography Lab based out of Drexel University.