The fate of 704 and 706-08 Sansom Street on Jewelers Row continues to hang in the balance as pending demolition looms in the foreground. Today the Philadelphia Historical Commission issued a continuance for the two buildings, tabling a vote for 90 days on nominations submitted for placement on the Philadelphia Register of Historic Places by the Preservation Alliance for Greater Philadelphia in their ongoing efforts to protect and preserve the historic fabric of the country’s oldest diamond district. On Wednesday national suburban homebuilder Toll Brothers was issued a demolition permit for the buildings by the Department of Licenses and Inspections. The real estate firm plans to raze five connected properties along Jewelers Row, all part of Carstairs Row, the first speculative row house development in Philadelphia, and build a 16-story condominium tower in their place.

On October 21, the Committee on Historic Designation voted in favor to recommend the properties to be listed on the local register. However, the Commission voted today to hold off on accepting or rejecting the nominations to avoid what Commission members said would lead to legal confusion and a false perception of hope for public advocates seeking to save the active buildings. “The Historical Commission can have an opinion, but cannot invalidate the permit,” said Commission member Mike Fink. “Voting today would confuse the public and muddy the waters. We don’t want to plant seeds before a heavy frost.” 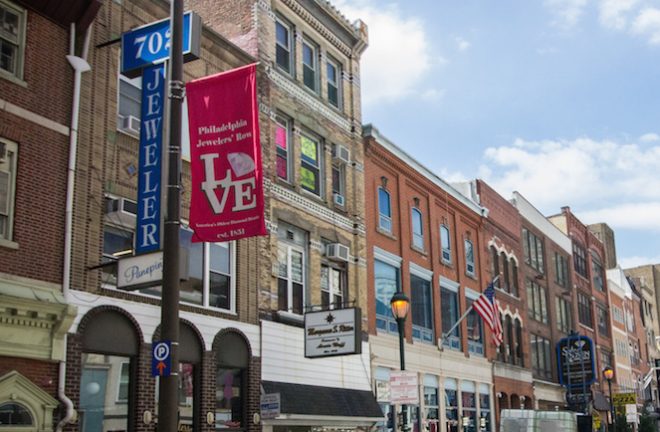 Responding to the ruling to shelve a decision on the nominations, Paul Steinke, executive director of the Preservation Alliance, said that the “role of this commission is not legal, it’s historical” and that voting on both nominations in the meeting today would be most appropriate. “I understand that Commissioner Fink doesn’t want to muddy the waters on the legal side and doesn’t want to plant seeds with heavy frost around the corner, but we believe we have an idea for climate change that will forestall that heavy frost.”

Attorney Hal Schirmer, legal council for the Preservation Alliance, opposed the continuance and urged the commission to rethink its decision to postpone voting on 704 and 706-08 Sansom Street. “Per the city preservation code, the Commission has a duty and a responsibility to decide if these facts are correct and the properties historic. I know from other projects that the Historical Commission takes the position that it does not rule on the validity of a demolition permit, whether it is valid or invalid,” said Schirmer. “As of right now there is no evidence whatsoever of any demo permit being properly posted, being issued to the correct person, or being on L&I’s website.”

Commission chair Bob Thomas said that they will continue to monitor the situation and revisit the two nominations in 90 days, whether the buildings are demolished or nothing has changed.