Making Connections In New Jersey With The Delair Bridge 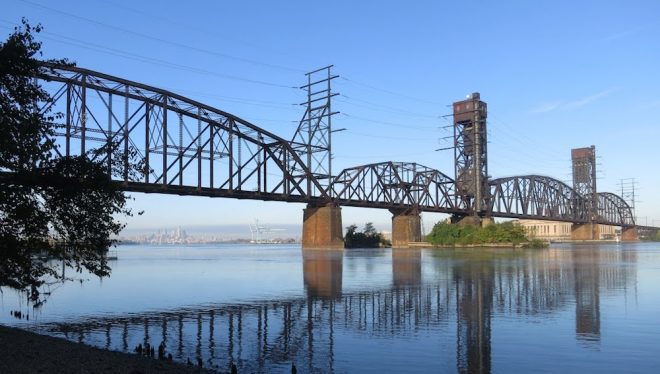 The Delair Bridge spans from Bridesburg to Pennsauken, New Jersey. The four truss rail bridge was built by Pennsylvania Railroad and completed in 1896. | Photo: Mick Ricereto

The abandoned Philadelphia, Wilmington & Baltimore RR Bridge No. 1 swing bridge at the Schuylkill Crescent in Gray’s Ferry will soon be reactivated for cyclist and pedestrian use when it is converted into a trail connector linking the Schuylkill River Trail to Bartram’s Mile. The bridge was built in 1902 to replace the Newkirk Viaduct, a multimodal bridge constructed in 1838 and the city’s first permanent crossing over the river. Philadelphia is covered with train tracks both active and abandoned, with bridges like this one crossing every small and large body of water in the region.

The Delaware River was all that stood between Philadelphia and early railroads linking points south, a mere 800-foot crossing, but a much bigger challenge than that of crossing the Schuylkill River. For trains going north of Philadelphia the southernmost crossing into New Jersey was at Trenton, where tidewater abruptly stops to meet the eight-foot Falls of the Delaware. The first rail bridge across the Delaware River was built here in 1802. This bridge evolved over the years to become today’s “Trenton Makes, The World Takes” steel truss, completed in 1928.

Located just south of the Frankford Creek in Bridesburg and crossing over the Delaware River into the Pennsauken, N.J. area known as “Delair,” this long-armed structure was needed as much for freight and rail commerce as it was for holiday vacations down the Jersey Shore. 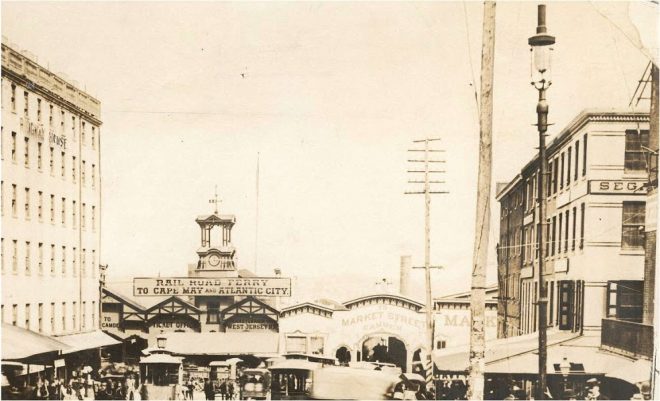 Long before rail travel, vacationers could sail down the Delaware River on special excursion vessels and disembark on the bay side of the peninsula, America’s first premier holiday destination was Cape May, N.J. Cape May catered to the affluent and upwardly mobile looking for nature, fishing, and fresh air with a summertime stay at the beach.

Vacationers headed to the shore could also take a ferry from Philadelphia to Camden and make the remainder of the trip by carriage. A phalanx of ferry companies had traversed the waters between both cities dating all the way back to 1688. The ferries welcomed passenger traffic as well as a huge trade in produce and livestock transport. In the 18th and early 19th centuries, a coach ride from Camden to the Jersey Shore would be a dusty, bumpy affair and could take upwards of four hours.

In the early 1800s, South Jersey was still completely undeveloped, with its shoreline resembling of sand and wild, maritime forests. After a visit to the mostly-vacant Absecon Island, Jonathan Pitney, an enterprising medical doctor, envisioned opportunity in attracting Philadelphians to the beach with a new resort town built expressly for taking in the healthy sea air. Pitney determined that only a railroad could get people across the Pinelands of South Jersey in a quick and efficient manner. He partnered with entrepreneur Samuel Richards to build a new railroad from the Camden waterfront directly to his resort, convincing factory owners along the route that rail travel would help their businesses grow. Most of the investors thought the idea to build a health resort at the ocean end of the line was pure folly, but still invested for the important rail connection to the city and its core markets. Pitney and Richards raised enough capital to buy property all the way from Camden to the coast while also acquiring the entire island from early settlers. The partners began their plans for the new resort and Atlantic City was incorporated on May 1, 1854. The first cross-state trip of the Camden and Atlantic Railroad took off on July 1. The first train was a rustic, open car rattletrap, but the adventure still attracted 600 hand-picked passengers for the maiden voyage.

Growth of the new town was swift. Pitney and Richards were smart to subsequently build an enormous hotel on the beach, realizing that working class folks would benefit the most by taking short stays or even day trips from the city. By 1874, 500,000 Philadelphians flocked to the coast during the summer season, prompting a second railroad, added in 1877. With a one-way “excursion” ticket for $1, the Philadelphia and Atlantic City Railway undercut the Camden and Atlantic line substantially. Inexpensive hotels and boarding houses popped up all along the newly laid Atlantic City street grid. A working class man could now afford a week at the beach with his family—and thus the Jersey Shore was born.

The competing West Jersey Railroad was completed to Cape May in 1863, but by then it was clear: Atlantic City had become America’s official playground. The permanent boardwalk was added in 1896. The year-round population of Atlantic City was only 2,000 in 1875, yet it swelled to over 30,000 by 1900. The more distant Cape May would be cast in its shadow as a charming, but sleepy Victorian seaside outpost.

A Quicker Way to the Shore 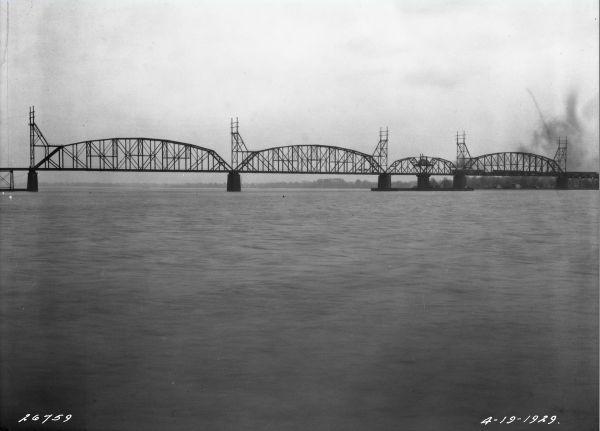 The mighty Pennsylvania Railroad wanted a piece of the Atlantic City action. The largest railroad in the world (and the largest corporation in the world) at the end of the 19th century went on a spending spree. The PRR purchased Pitney and Richard’s original railroad and many smaller railroads throughout western New Jersey and absorbed them into the subsidiary West Jersey & Seashore Railroad in 1896. Competition was high. Four railroad companies crisscrossed the Delaware River and ferry boats heaved the shallow tidewater into Camden’s piers many times daily. PRR wanted desperately to create an advantage and set out to build a bridge across the Delaware River. The tracks would need to skirt the city’s Northeast industrial web, but a direct route from Center City’s Broad Street Terminal and across the river would still be more convenient than making the ferry trip to Camden.

Crossing the Delaware River required a moveable span to allow for marine traffic, as building a bridge high enough for ocean-going vessels would be too costly. PRR head engineer William H. Brown called for a 323-foot swingspan at the shipping channel, connected with three sections of massive 533-foot Petit truss spans: one on the New Jersey side and two on the Pennsylvania side. The Delair Bridge trusses would be very large and heavy, but still fall short of the longest truss spans by a mere nine feet. The swing span was operated by steam and held the record for the longest, center-bearing pivot bridge in the world. Including the trestle approaches on both sides, total length of the structure is 4,396 feet. Compare this with the later Ben Franklin Bridge at 9,573 feet, much longer due to the gradual climb needed to make the 135-foot shipping clearance.

Work began with pier excavation on January 15, 1895. The steel work was started on November 1 of that year, and was finished in only four months. The massive trusses were fabricated with manganese steel milled by the Pencoyd Iron Works, the first large bridge to use the new high-tensile material. Pencoyd was located in Lower Merion Township directly across the Schuylkill River from Manayunk. Today, the hidden Pencoyd site is currently being redeveloped and the small rail bridge connecting the site to the city, known as the Pencoyd Bridge, was recently restored as a car and pedestrian crossing.

As Atlantic City entered its “Boardwalk Empire” period, with more and more weary city dwellers making the 90-plus minute trip from Broad Street for a week or afternoon’s promise of surf, sun, and sin, the Delair Bridge became busy with passenger traffic. Atlantic City was a place of escape after Prohibition due to it’s relaxed rules on booze and other illicit activities. The railroads too were booming, right up until the day the new Delaware Bridge (later named Ben Franklin Bridge) opened on July 1, 1926. With Philadelphia’s blue collar workers now wealthy enough to own personal cars and with the advantage of cheap bus fares, the railroads lost business immediately. By 1928, the West Jersey & Seashore Railroad was down $2 million in revenue. 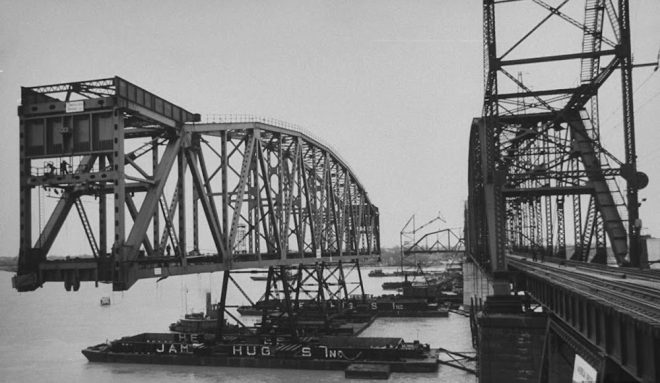 In the post-World War II boom years, and particularly with the passage of the Interstate Highway Act in 1956, building and infrastructure development caused an immense appetite for steel America. United States Steel began construction on the Fairless Hills steel plant on the upper tidal Delaware River in the late 1940s. To serve the forthcoming plant, the Army Corps of Engineers upgraded the river’s shipping capacity by straightening and dredging a deeper channel, while also requiring a 500-foot wide bridge clearance for more modern ships. This rendered the old pivot bridge obsolete with clearance not even half the new requirement.

The railroad’s engineers responded by permanently closing the Delair Bridge and converting one of the original Petit trusses to a 542-foot riveted Warren truss vertical lift span, which would rise up for boat traffic to a height of 135 feet, equal to the Ben Franklin Bridge. This engineering feat would require removing the original truss, building new piers and lift towers, and installing the new prefabricated moving section quickly so as not to upset rail traffic for an unreasonable period.

Work began on March 1, 1960. The engineering firm Hardesty & Hanover, known for its work with railroad lift spans, was hired to complete the job. While sections of the bridge were being dismantled, the new span and towers were being constructed upriver and brought to the site on barges. The old span was removed by floating a barge underneath at low tide and lifting it away six hours later, while the new span was put in place similarly by lowering it at high tide and letting the barge float away as the river level went down.

The new lift towers needed huge piers to hold both the weight of trains, the bridge span itself, and its equal weight in cable-actuated counterweights. The westernmost span needed to be shortened by 100 feet to make room for the towers. The result was the unique, asymmetrical look of four different trusses.

When completed, the upgraded structure captured the record for longest double-track vertical-lift span bridge in the United States, falling short of the longest single track lift, the Cape Cod Canal Railroad Bridge, built in 1933, by only two feet. 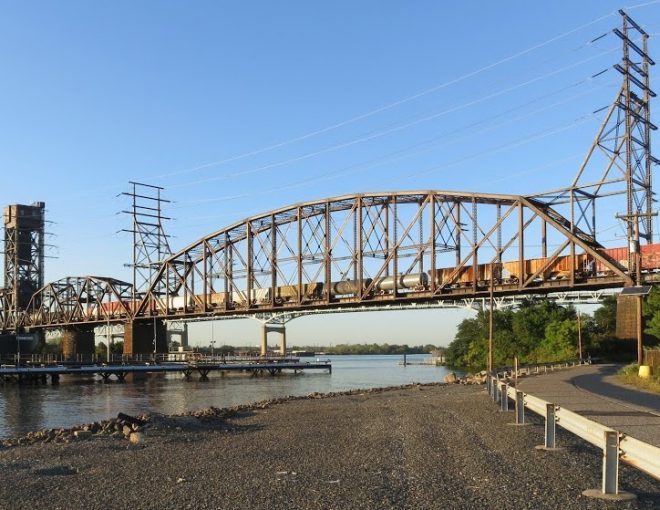 The Delair Bridge is currently used for CSX and Northern Suffolk rail transportation as well as N.J. Transit’s Atlantic City line. The bridge was modernized heavily in 2012 with an $18.5 million U.S. Department of Transportation TIGER grant, bringing the structure safely into the 21st century.

The Delair Bridge is mostly hidden from our daily lives. It can be seen briefly from I-95 near the Bridge Street exit, and its lift span towers look dark and menacing in the shadows of the Betsy Ross Bridge. From the south the Richmond Generating Station and Tioga Marine Terminal blocks the shoreline for miles. The best vantage for viewing the bridge is from New Jersey, where the bridge lands at the end of a road with a small parking lot for a boat launch ramp and small fishing pier.

Taking New Jersey Transit’s Atlantic City line out of 30th Street Station is a fabulous way to experience the Delair Bridge. The right-of-way takes an alternate route through the industrial sprawl of Northeast Philadelphia into Frankford Junction and over the Delaware River. For a transit-filled afternoon, take New Jersey Transit from 30th Street, stop and view the bridge from water’s edge at Pennsauken station, then walk back up the hill and catch the River Line back to Camden. From here walk over the Ben Franklin Bridge or take PATCO back over and connect to anywhere in the city.

Mick Ricereto Mick Ricereto is an interior designer and new product development specialist who lives in Fishtown. An avid urbanist and nature lover, the artist and designer spends his time observing and photographing the environment around us. Mick graduated with a BA Interior Design from Spring Garden College in 1992, the school’s final year. Follow him at www.mickdesign.com and on Instagram at @kittens_incorporated