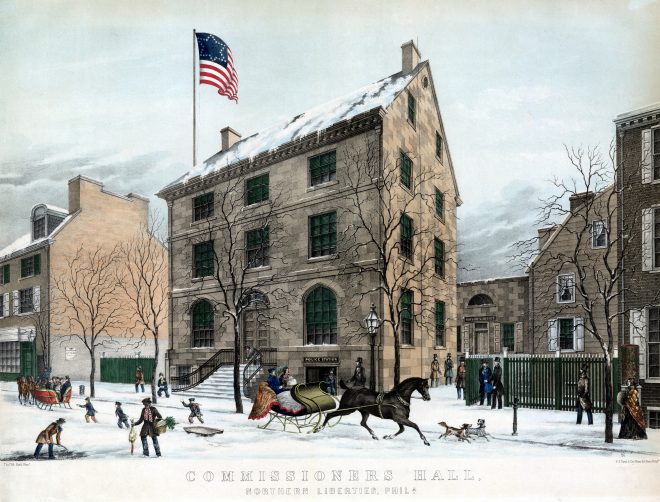 Lithograph by Charles Conrad Kuchel of the Commissioners’ Hall of Northern Liberties`, showing a winter scene in 1852. Note: the mayor’s office was in the rear | Source: Library Company of Philadelphia.

In 1832, President Andrew Jackson vetoed the renewal of the charter of the Second Bank of the United States, which held the deposits of the United States Treasury and invested in infrastructure and commerce, enabling the young country to grow in a coherent, intentional fashion. Jackson’s veto was a political move to weaken a rival for the White House, Nicholas Biddle, president of the Bank, and an ideological arrow aimed at centralized control of the national life. The President ordered all federal deposits withdrawn and declared that U.S. funds would no longer be deposited effective October 1, 1833. In retaliation, Biddle began calling in loans from across the country, engineering a financial crisis.

Almost two centuries later, Jackson and Biddle appear to haunt the 2016 Presidential election. While many many commentators have drawn on the ideological and stylistic similarities between Jackson and the Republican nominee, Donald J. Trump, and particularly both men’s distinctly anti-elitist demagoguery, Democratic candidate Hillary Clinton quite closely resembles Biddle, an ambitious insider with strong intellectual and liberal instincts who was also cozy with the economic elite.

Biddle’s move to counter Jackson’s veto of the Bank ultimately backfired when angry workers and farmers started blaming him and the Bank for the financial crisis; they consolidated support for Jackson and the Democratic Party.

But others, including artisan business owners and engineers, particularly in the District of Northern Liberties (the seventh largest city in the nation in 1830), turned on Jackson. On February 13, 1834, hundreds of these men held the “Great Meeting of the Mechanics and Workingmen of the Northern Liberties” at the Commissioners’ Hall of Northern Liberties, a large building on the east side of 3rd Street, midway between Buttonwood and Green Streets—where Spring Garden Street passes today. There, in an event that runs counter to the usual narrative of white working class idolatry of Jackson, they expressed their anger by making a series of resolutions, among them:

[B]efore God and our country, we solemnly declare it as the firm conviction of our minds that the present unprecedented derangement in our currency, and general falling off of employment to us, the workingmen of the Northern Liberties, is entirely owing to the improper and unjustifiable interference of the Executive [President Andrew Jackson]. 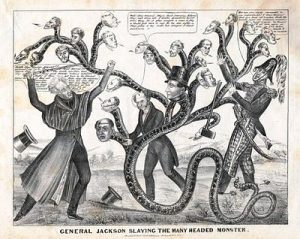 Therefore, resolved, That we view, in the late removal of the public deposits, the foundation of our future hopes undermined, the collection of debts due us interrupted, the prospects of business blasted, the value of what little property we have diminished in such a ratio, that those of us who are partially indebted for the same must become bankrupt, except there be a speedy remedy applied.

Resolved, That we view with alarm the Executive experiment (as it is called) as dangerous to our liberties, the derangement of a sound currency, which we all cherished and received in reward for our labor, prostrated by the late unjustifiable act of the Executive.

Samuel McKean, U.S. Senator from Pennsylvania, read the resolutions before Congress on February 26, 1834. Nothing came of this, since Jackson had triumphed in the Bank War by then. The ensuing Panic of 1837 harmed the everyday laborers and businessmen of the Liberties far worse than what they had anticipated in 1834. As for the Second Bank of the United States, it became a private corporation under Pennsylvania law in 1836, but suspended payment in 1839 and was liquidated in 1841.

Jackson opponents organized the Whig political party, which soon had a sizable constituency in Northern Liberties. The district subsequently became intimately involved in the national elections of 1838 at a time when the discord between Whigs and Democrats reached a boiling point in Pennsylvania. The ideological framework of the two parties suggests (and certainly informs) the polarized nature of the 2016 Presidential election. Generally pro-business, and in favor of building transportation, infrastructure, and national economic institutions, Whigs were progressive-minded on education, slavery, and civil rights. Democrats wanted control of the government and the economy in the hands of all white men and not just landed elites, particularly yeoman farmers and workers; they supported slavery and, in state houses like Pennsylvania’s, pushed to reverse gains in black civil rights. It is at this time that Jacksonian Democrats pushed through changes to the Pennsylvania constitution that aggressively expanded the franchise of white men and revoked it for all black men, including landholders. 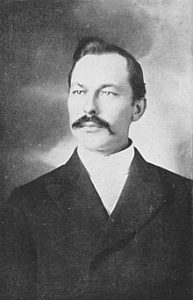 In this explosive time, as ours, the stakes of the Congressional elections were exceptionally high. By winning the 1838 election in the Northern Liberties District, the Whigs would have carried a Congressional seat for the Third District of Pennsylvania, as well as the State Senate and House, thus assuring themselves of a seat in the U.S. Senate. Without these returns, the Democrats, who had won the Pennsylvania Governor’s race, would control everything except the Pennsylvania Senate.

The Whig candidate for the Third Congressional District of Pennsylvania was Charles Naylor, a lawyer from Northern Liberties who ran against the Democrat Charles J. Ingersoll. It seems that Democratic officers purposefully lost one polling return sheet after the election, thereby causing all votes from the districts of Spring Garden and Northern Liberties to be rejected. Local election officials certified Ingersoll as the winner, but Whig state officers proclaimed that Naylor had won (which he had done, by 775 votes).

When the U.S. House of Representatives met in Washington, DC, on December 2, 1839, both Naylor and Ingersoll appeared to claim the seat for the Third District of Pennsylvania. After examining their credentials, Congress decided that Naylor should be permitted to sit, and he recited the oath of office.

Party politics and bad feelings ran high, so the matter was by no means over. A Philadelphia faction presented petitions stating that Ingersoll was properly elected to Congress. They further alleged election fraud and demanded an investigation by the U.S. House Committee on Elections.

The committee, in a somewhat partisan manner, confirmed Naylor’s election in July of 1840. Its 542-page report simply stated that Charles Naylor’s margin was 775 votes, in spite of admitting the certainty of fraud and other irregularities in the Spring Garden and Northern Liberties districts of Philadelphia—even though there was an obvious conspiracy among the election officers to fraudulently add hundreds of names to the voter registries and even though those illicit votes were counted for Naylor. Reasoned away as hearsay, these allegations were ignored.

The report was adopted by the House of Representatives on January 15, 1841, and Naylor took his seat with confidence—although his term was almost over. Rigged election or not, this affair caused great political grief for years in Pennsylvania, especially in Philadelphia. It was also associated with gubernatorial and other election problems and violence at the Pennsylvania State Capital in Harrisburg from 1838 to 1840. Jacksonian Democrats were prone to mob violence.

But Whigs like Charles Naylor proved to be reactionary, too, on the issue of immigration; they questioned the legitimacy of Catholics and demanded that immigrant children learn from Protestant text in school. Most Catholics were Democrats. In July 1844, a few months after Nativists had ignited a bloody riot in Kensington, Naylor accompanied a Nativist mob that had gathered to threaten the Catholic Church of St. Philip Neri on Queen Street.

A forgotten hero of Northern Liberties, William D. Kelley—one of the founders of the Republican Party | Source: History of Philadelphia, 1609-1884 (1884)

The militia group guarding the church ordered the rioters to disperse, but they refused. Naylor jumped in front of the soldiers and begged them to hold their fire. The troops arrested the ex-Congressman and others, keeping them as prisoners inside St. Philip Neri’s. Everyone but Naylor was released the next day, so the mounting Nativist mob procured two cannons and pointed them at the church. Concerned about the combination of rioters and cannons, the militia released Naylor and he was carried home to Northern Liberties on the shoulders of the cheering mob.

Political ideology and class allegiance are dynamic, changeable forces. William D. Kelley, born and raised in Northern Liberties a Democrat, went on to help found the Republican Party, which married Whig political and economic ideology with concerns for civil rights. An advocate of immigrant rights and labor protection, Kelley began working at eleven to support his family, apprenticed as a jeweler, and then educated himself in law. Admitted to the Philadelphia bar in 1841, he was later appointed a judge of the Court of Common Pleas.

Judge Kelley came to national attention in 1854 when he published a rousing discourse against the slave trade. He quit the Democratic Party and was later made a delegate to the second Republican National Convention in 1860. Elected to the House of Representatives, he served in Congress for almost 40 years. Kelley frequently spoke on the necessity of voting rights for African Americans and introduced legislation ensuring them the right to vote in the District of Columbia. He was a nominee for Vice President in 1868.

Though exempt from military service as a member of Congress, Judge Kelley volunteered during the Civil War and would head out from his Philadelphia home in his blue coat whenever the Reserves were called up. He was also the first politician to suggest creating what would later become Yellowstone National Park. A biography of William Kelley declared that he was the “most considerable public character whom Philadelphia ever sent to the national councils.”