Considering Our Riverfront Palazzos Of Power: Their History And Potential

In search of both function and corporate identity, the Philadelphia Electric Company enlisted architect John T. Windrim and engineer William C. L. Eglin to build spectacular neoclassical power stations along the Schuylkill and Delaware Rivers. With roaring motor rooms, a plexus of ventilation systems, and cavernous turbine halls, the stations were designed to astound and seduce the public with modern technology through commanding architecture that asserted both tradition and progress. Author Aaron Wunsch, a professor of historic preservation at the University of Pennsylvania’s School of Design (and Hidden City Daily contributor), calls these monumental electric stations “Palazzos of Power,” the title of a new book he’s put out with architecture photographer Joseph E. B. Elliott. Wunsch and Elliott will present their elegant book, with Wunsch’s crisp history, Elliott’s elegiac black and white photographs, and archival images, tonight at the Center for Architecture. Hidden City managing editor Michael Bixler caught up with Wunsch in advance of the event. 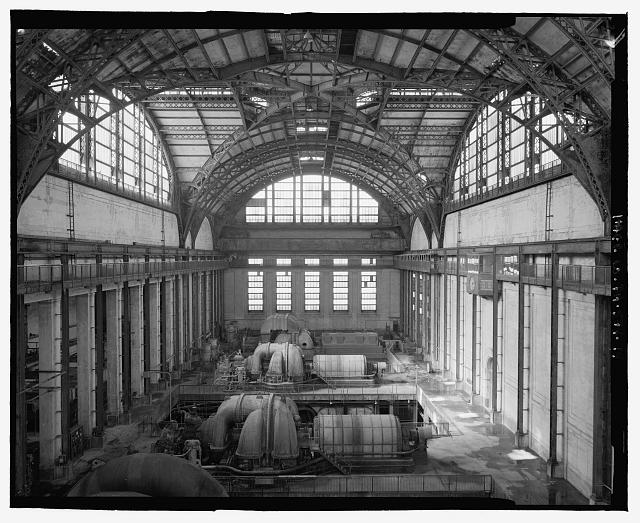 Michael Bixler: From the outside Chester, Delaware, and Richmond Generating Stations look like Greco-Roman palaces of a lost civilization or even pyramids built for Machine Age pharaohs. Their dense, visual presence commands attention. In the book, Joseph E. B. Elliott’s beautifully haunting photographs of turbine halls reveal interior spaces that can be described as industrial cathedrals. The terra cotta and Guastavino tile vaulted ceilings, columned divider screens, curved steel skylights, and ornate iron staircases show an attention to detail that the public would rarely, if ever, see. Why did architect John T. Windrim and William C.L. Eglin, Philadelphia Electric’s chief engineer, put so much thought into the interior details of their power plants?

Aaron Wunsch: You’re right to ask about the interiors, the splendor of which seems harder to explain because of its limited viewership. There are a couple of answers, I think. One is that these spaces were showplaces for new technologies that ran new cities. Cities like Philadelphia were, of course, not new in a literal sense but their size, speed, and illumination in the age of electricity made them unfamiliar, dazzling, and daunting. Power plants were the hearts of vast new networks, thrumming with wondrous force. They were, in some respects, the essence of what historian David Nye calls the “technological sublime.” There was a tradition of showing off generating equipment and other great machines at world’s fairs, witness the great Corliss engine at the Philadelphia Centennial. The showrooms for such behemoths were often dubbed “Machinery Halls,” and I see power plant interiors, specifically, engine houses and turbine halls, as direct heirs to this tradition. True, there were fewer visitors. Only company employees saw these spaces on a regular basis. But public officials and visiting dignitaries were occasionally brought through, and photographs captured the spectacle for a wider audience. The other key factor was the architectural logic of welfare capitalism. In the early 20th century, big companies wanted to make workplaces safer, more comfortable, and more attractive. Such measures were thought to minimize employee discontent and stave off “socialistic” tendencies like unionizing. So, I think you can read Philadelphia Electric’s most impressive power plant interiors as some combination of the machinery hall, the modern office building, and the well-appointed locker room. 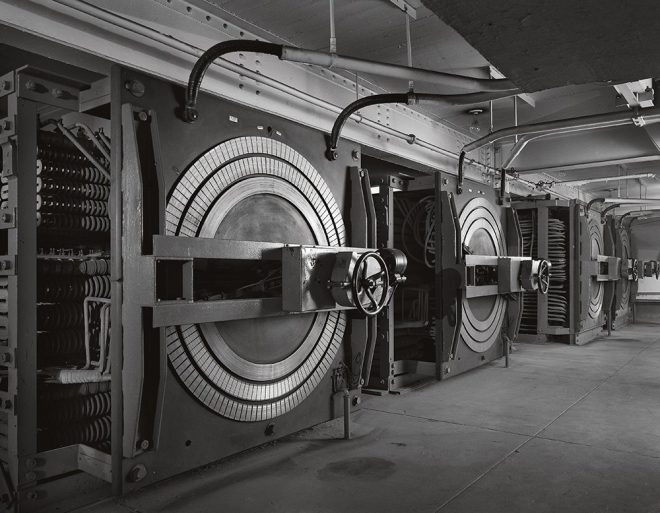 MB: You describe the second generation of central stations built around the 1900s as “public architecture” in both appearance and function even though they were privately owned and only accessible to company employees. How so?

AW: Here, I’m thinking of the public-institutional infrastructure created during America’s City Beautiful movement. Philadelphians are familiar with classicizing landmarks along the Ben Franklin Parkway but virtually all American cities erected (or aspired to erect) new court houses, auditoriums, museums, and city halls in this period. When they did so, the architectural language was typically neo-Roman in a general sense, though not in a literal one. In fact, the language of classicism employed here was highly synthetic—a sort of pan-classical vocabulary that had been reworked by France’s École des Beaux-Arts and its American admirers. This stuff made its large-scale debut at the World’s Columbian Exposition, held in Chicago in 1893. It then became a sort of kit for remaking American cities’ municipal cores.

MB: These are commanding buildings and significant architectural landmarks that contribute to telling the story of the city’s history. Why is Eglin and Windrim’s work for Philadelphia Electric largely ignored by academics and historians?

AW: In the book I remark that “in their search for charismatic outliers, architectural historians have underplayed the conditions that defined a career like Windrim’s. These were the dual imperatives of City Beautiful academic classicism and Progressive Era corporate image making, a set of widely observed if largely unwritten guidelines that shunned eccentricity and prized propriety.” I don’t know how many people still read Sinclair Lewis’ great novel, Babbitt (1922). Those who have will know what the term ‘Babbitry’ means and will further understand it when I say that some of these buildings are a bit like Babbitt dressed in a Roman toga. But that’s also kind of unfair. There’s a puzzling grandeur to these places, and though they’re partly a product of the spirit of conformity that Lewis lampooned, they looked weird and awesome in their day and perhaps even more so now. That weirdness stems not from any intentional eccentricity on the designers’ part but from a marriage of ancient forms and modern technology that is entirely out of sync with what Modernism told us “good architecture” was supposed to be about. 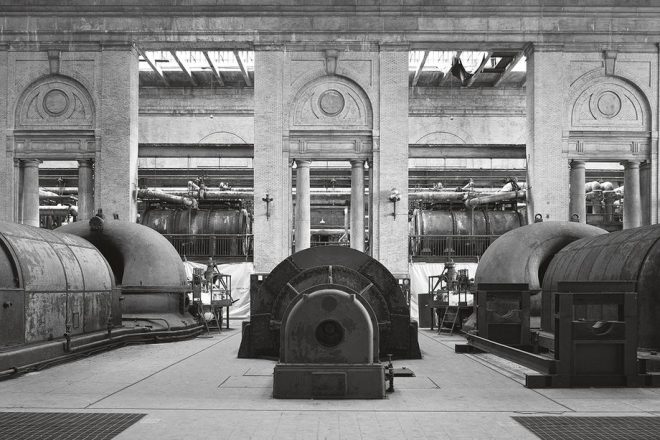 MB: How much influence did the City Beautiful Movement and municipal beautification have on Windrim’s design of Chester, Richmond, and Delaware stations and how much of it was the drive to establish a corporate identity through large-scale magnificence and theatrical presentation?

AW: I think you’d have trouble establishing degrees of influence. Windrim was a perfect fit for the job because he was part of cohort of American architects who had distilled Beaux-Arts principles and, as my colleague David Brownlee argues, turned them into something less theoretical and more stylistic, something more akin to stage-set design. It was a nice coincidence that Windrim’s firm had heretofore specialized in public buildings—indeed, that Windrim’s father had devised the first cohesive scheme for the Parkway. The younger Windrim (John) was perfectly positioned to create the architectural equivalent of a “public-private partnership,” which is what PECO’s central stations aspire to be. But it is worth noting that Eglin, too, was interested in City Beautiful ideas and may well have studied the Chicago World’s Fair more closely than Windrim. In the late 1910s, Elgin illustrated public talks with images of the fair; its electrical exhibits struck him as significant to the history of his field, which they were.

MB: You mention that the buildings were influential in pushing the needle of social change forward in regards to civil rights. Black, white, and immigrant workers worked side-by-side. Yet, the separate zones of production, both in the nature of the work and each area’s inherent function, served as a physical form of segregation, be it class and/or race. In regard to Windrim’s interior design of the stations, can you briefly describe what the division looked like and how it played out?

AW: You’d be hard-pressed to find any evidence of social divisions in these buildings other than those of class. What the book calls out, I hope, is the clear set of architectural distinctions made between white-collar and blue-collar spaces. Boiler rooms were the latter, control rooms the former, and spaces like turbine halls lay literally and figuratively in between. What I found most fascinating were spaces in which mixing was meant to occur. The most notable were the plants “electric restaurants,” which were meant to model new cafeteria technology and harmonious social relations. How that worked out in practice is something I wish I knew more about. 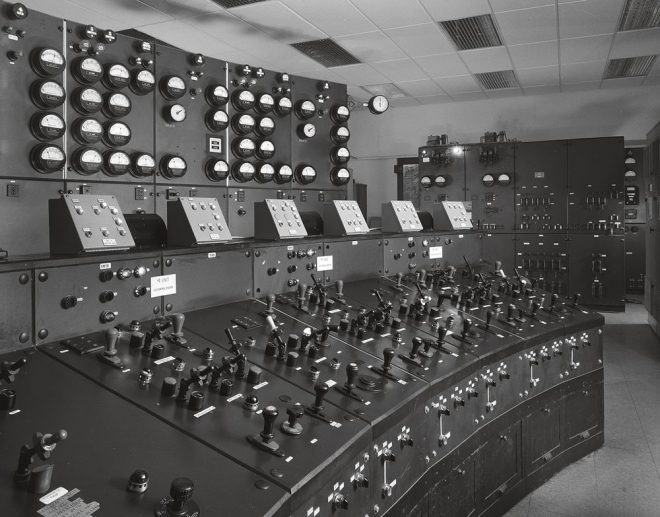 MB: In the book you call Philadelphia Electric’s central stations “improbable vestiges of an ethos we have forgotten,” referring to the optimism of the Progressive era. With the exception of say the recently complete World Trade Center Transportation Hub, contemporary public architecture rarely strives to achieve the type of grandeur and imposing scale of power stations and train stations from the late 19th and early 20th century. Why aren’t we building magnificent palaces to house internet server farms? Have we lost our belief in the power of built forms to shape human behavior?

AW: Boy, that’s a big one and I don’t think I can do it justice. Part of the answer lies simply in our society’s increasing divestment in the public realm. To see what I mean, compare the old Art Deco post office at 30th and Market to its putative replacement at 30th and Chestnut. Or compare the now-vacant Germantown High to charter-school successors in the area. Private infrastructure is another matter. Server farms aren’t inconspicuous by happenstance; they’re inconspicuous by design. That’s partly to discourage terrorist attacks, I guess, but it also plays into an older architectural story of utilities trying to blend in. In that sense, server farms are like the substations I write about in the book. But this isn’t to say the technological sublime or the quest for grandeur have vanished. They just manifest themselves in different ways: more private (corporate office parks), less tangible (the Internet).

MB: The economic and social narrative of the city has shifted greatly since these generating stations fueled the city’s golden era of manufacturing when Philadelphia was the “Workshop of the World.” What role can and should they play today in contributing to urban revival other than decaying reminders of Philly’s post-industrial economic fallout. How would you like to see them redeveloped? What do you think about developer Bart Blatstein and caterer Joseph Volpe’s plans to convert Delaware Generating Station into two boutique hotels and a large-scale wedding venue?

AW: I don’t have a set idea of what I’d like to see these places become. I’d like to see them be assets to their neighborhoods, not just island playgrounds for the rich. And I’d like to see them preserve enough of their character, inside and out, that some of the history of these sites as workplaces and technological wonders can still be told. But that doesn’t preclude making bold architectural moves in other areas. I’m interested to see what shapes up and, frankly, delighted to see almost any form of reuse. So much in Philadelphia is torn down simply because people lack the imagination to come up with an alternative. 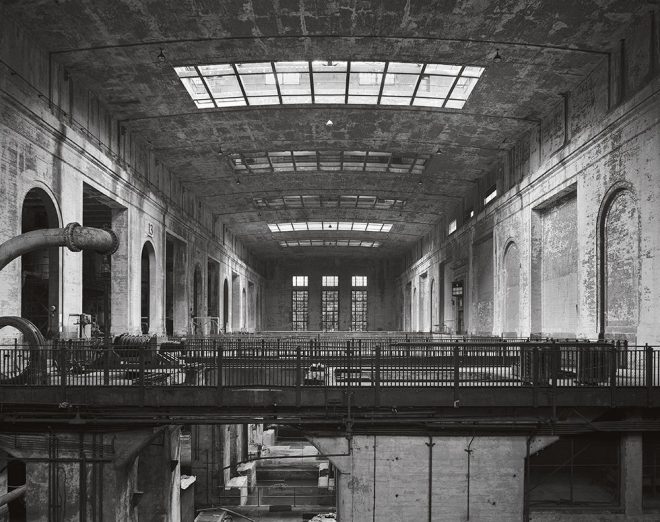 MB: Repurposing Chester station for office space was an immense, expensive project, costing $10 million in environmental remediation alone, but it did prove that these massive old central generating stations can be reused. What kind of approach do you think Delaware and Richmond stations require to both reactivate such immense, complicated sites while acknowledging the two site’s former use as a workplace? How do you stay sensitive to their blue collar history when the biggest challenge is just figuring out how to logistically and financially reuse such massive, cumbersome buildings for commercial use?

AW: There are examples of creative power station reuse across the country and the globe. I hope that those in charge of deciding the fate of PECO’s plants will survey the options as broadly as possible. Maybe they’ll come up with something even more original and interesting! It can be done, folks.

Join author Aaron Wunsch and photographer Joseph E. B. Elliott for a book lecture and slide show presentation of Palazzos of Power: Central Stations of the Philadelphia Electric Company, 1900-1930 at the Center for Architecture + Design, 1218 Arch Street, on Wednesday, November 2 at 6PM. Register for the event HERE.