Editors Note: For the duration of her brief formal career, architect Minerva Parker Nichols (1862-1949) both represented and rejected gendered assumptions about architecture. Her formal practice lasted just 10 years and was concentrated in the Philadelphia area, yet Nichols serves as a focal point for the study of women and the built environment in late 19th century America. As the first woman in the country to practice architecture independently, Nichols carved out a prominent and respected place in the male-dominated field all while specializing in projects associated with female clients and uses. Nichols’ commissions were mostly residential works and women’s clubs, but she was consistently praised by other professionals and trade publications for the high caliber of her designs. However, unlike contemporary female architects such as Louise Blanchard Bethune, Julia Morgan, and others, Nichols has garnered little attention in architectural histories and retrospectives.

This week the Hidden City Daily celebrates the life and career of Minerva Parker Nichols with a three-part series with special emphasis on her design for Mill-Rae (now Cranaleith Spiritual Retreat Center) in Somerton. The former late-Victortian home of Rachel Foster Avery, women’s rights activist during the suffrage movement, was recently nominated to the National Register of Historic Places. On October 6 Pennsylvania’s State Historic Preservation Review Board recommended approval of the nomination, which has now been forwarded to the National Park Service for final review. 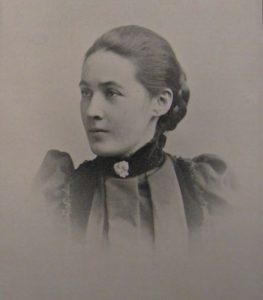 Minerva Parker Nichols was born in Peoria County, Illinois in 1862. She was the youngest daughter of Amanda and John Parker. When John Parker, a schoolteacher, was killed in the Civil War shortly after Nichols’ birth, she and her older sister were raised by their widowed mother, aunt, and grandfather, architect and builder Seth A. Doane. Following a series of moves within and near Peoria County over the next several years, the Parker family moved to Chicago, and Amanda married Dr. Samuel Maxwell in 1875. A year later, lured by the Centennial International Exhibition of 1876, Nichols and her family moved to Philadelphia. When Dr. Maxwell died in 1877 and Nichols’ half-brother Samuel was born, her mother opened a boarding house for medical students in order to provide once again for her family. Nichols, meanwhile, sought out an education in architectural and drafting programs.

The late 19th century offered particularly fertile opportunities for a young woman like Nichols with an interest in architectural education. At the time, formal architectural programs and emerging schools of design were just beginning to admit women; the first university departments to accept women were the Massachusetts Institute of Technology (MIT) and Cornell University. These programs, established in 1865 and 1871 respectively, were based at land-grant institutions, and were therefore required to admit women (although MIT did not admit them until 1885). It was not until 1879, however, that Mary L. Page became the first woman to graduate from an American architecture program, when she received her degree from the University of Illinois. (She subsequently became a schoolteacher.) By 1891, twelve women had earned degrees from architectural programs at American universities. They remained a small percentage of the overall student population in these departments, but the increasing number of specialized educational opportunities for women nevertheless signaled an expanding role for women in the architectural field.

Predating these formal curricula at universities, and with more emphasis on a female student base, were the era’s emerging schools of design that trained men and a growing number of women in the visual, industrial, and architectural arts. With courses in subjects such as mechanical drawing, lithography, and engraving, these design curricula were closely related to the contemporary, fledgling programs that schooled women in domestic arts. Unlike those proto-home economics courses, however, these schools of design offered women a socially-sanctioned education and skills outside of the home. They served a generation of American women left without husbands, fathers, or a source of household income by the Civil War, but they were far from just a charitable investment in widows’ families. The school of design movement was also an outgrowth of the social sensibility that women were the arbiters of taste. The popular assumption was that if women could learn to properly hone that inherently feminine sense of artistic taste, they could then shape a national aesthetic, both within and beyond the home. Given this potential for a broader influence, the schools’ areas of emphasis maintained a natural proximity to trade, earning many single women—like Minerva Parker (Nichols)—a measure of independent employment.

Philadelphia was especially rife with these nascent institutions, including the Philadelphia Normal Art School, the Franklin Institute (which later supported the founding of the School of Design for Women, now Moore College), and the Pennsylvania Museum and School of Industrial Arts—all of which Nichols attended. These schools offered courses and lectures in architecture. The Philadelphia Normal Art School also offered a teacher’s certificate program in drawing. Nichols enrolled in that program at the age of 17. She continued to live with her mother in their boardinghouse, listing her occupation in the 1880 Federal Census as “governess” while she completed her certificate. After graduating in 1882, she enrolled two years later in the Franklin Institute’s two-year course in architectural drawing—a program that was itself started by a woman, Sarah Worthington King Peter, who saw the need for women to be suitably trained under the auspices of a respectable institution. 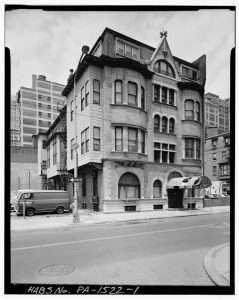 New Century Club of Philadelphia in 1973 before being demolished that same year. | Photo courtesy of Historic American Buildings Survey (HABS), Library of Congress

Soon after her graduation, Nichols landed in the office of a Philadelphia architect, working as an architectural drafter for various projects while pursuing another certificate from the Pennsylvania Museum and School of Industrial Arts from 1888 to 1889. Nichols’ mentor was architect Edwin W. Thorne, not the frequently cited architect Frederick G. Thorn (or his son, Frederick G. Thorn, Jr., who also practiced in the city). Both Edwin Thorne and Frederick Thorn were in active practice as Nichols began her career in 1886, but their specialties were quite different. Frederick G. Thorn worked as a partner in Wilson Brothers & Company, with a background in engineering and extensive experience with various railroad companies. (Frederick G. Thorn, Jr., also a civil engineer, worked in various offices around the city, including that of his father in 1895.) Edwin Thorne, meanwhile, was associated with residential projects, many of which were in the suburbs of Philadelphia, which is consistent with Nichols’ later focus on domestic architecture and her commissions in the Main Line suburbs of the city.

Nichols’ enrollment in 1888 in the Pennsylvania Museum and School of Industrial Arts coincided with Edwin Thorne’s decision to move his office to 1305 Arch Street. Electing to take over his office at 14 South Broad Street rather than follow Thorne to his new location, Nichols became the first woman in the country to practice architecture independently. She was not, however, the first woman to open an architectural practice. That superlative is generally accorded to Louise Blanchard, who opened a firm in Buffalo in 1881, in partnership with Robert Bethune. (Blanchard was 25 at the time.) Blanchard married Bethune three months later, practicing for nearly all of her career as Louise Blanchard Bethune. In 1888 (the same year Nichols started her firm), Bethune was admitted to the American Institute of Architects as the AIA’s first female fellow. In addition to Nichols and Bethune—both of whom received their training through technical programs and schools of design—eight other women graduated from university architecture programs between 1878 and 1894.

Nevertheless, female practitioners were still rare enough that Nichols’ new office garnered significant press in the building community, both locally and around the country. In Philadelphia, where she was not only the first woman to practice independently, but the first woman to practice at all, several trade publications noted her arrival around the time of her first listing in Gopsill’s City Directory. An editorial in the August 14, 1889, edition of the Philadelphia Real Estate and Builder’s Guide (PRERBG) announced that, “It is with pleasure that we note the advent of another entrance into the profession of architecture, and the pleasure is deepened by the fact that it is a woman, and the only one in this city who has choosen [sic] this useful occupation.” 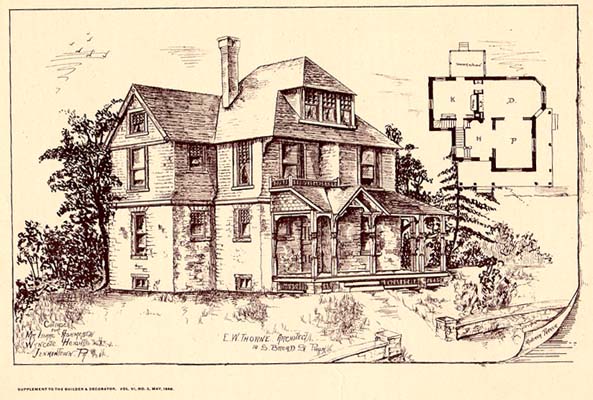 From the start of Nichols’ career, newspaper articles and architect profiles noted her stated specialization in domestic architecture—her “particular forte,” as the Chicago Tribune described it. This line of work offered a natural continuation of her projects in Thorne’s office, where—as The California Architect and Building News wrote—she had already “satisfactorily designed and executed a number of residences and dwellings.” Within the first two years of her firm’s existence, Nichols had eleven notices published in the PRERBG of projects on the boards in her office, nearly all of which were residential commissions. Domestic architecture proved to be Nichols’ specialty throughout her career, with many of her projects concentrated along Pennsylvania Railroad’s Main Line in the developing suburbs of Philadelphia.

Although Nichols’ portfolio included over 35 residential projects—including an estimated 20 designs for female clients—some of her highest-profile commissions were for women’s clubs. She designed the clubhouse for the New Century Club in Philadelphia in 1891 (demolished in 1973), returning to the site at 12th and Sansom Streets to supervise its construction on the day after she married Reverend William I. Nichols. She also designed the New Century Club in Wilmington, Delaware—now the Delaware Children’s Theater, listed on the National Register of Historic Places in 1983—and a pavilion for the World’s Columbian Exposition that was much-publicized, but never built. All of these projects, as well as her eventual teaching position at the Philadelphia School of Design for Women, where she lectured in architectural ornament for several years, emerged from her activism in women’s organizations. Several of her clients also appear on the membership rolls of the New Century Club and other women’s organizations in which she was active.

The professional admiration that Nichols earned for her portfolio and designs extended through her decade of practice in Philadelphia, and was included in retrospective profiles of her career even after she retired from formal practice in 1896. Her move to Brooklyn that year, and the subsequent birth of her four children, marked the end of her formal practice. However, she continued to design occasionally for family and friends. Her later commissions included a building for her brother-in-law, the Browne and Nichols School in Cambridge, Massachusetts, as well as several residences for family members for which she supervised the construction, even as decades passed since her supposed retirement. When she died at the age of 87 in 1949, the New York Times published an obituary that praised her career and noted her lifelong involvement in architectural work and women’s causes.

Join the Cranaleith Spiritual Retreat Center on October 29 for “Celebrating the Women of Cranaleith: Women of Strength and Vision,” featuring historical reenactments, a panel discussion, and tours of the Mill-Rae home. The event is free and open to the public. For more information see their event page HERE.

Leave a Reply to John A. Baker III Cancel reply