The Classiest Shed In University City 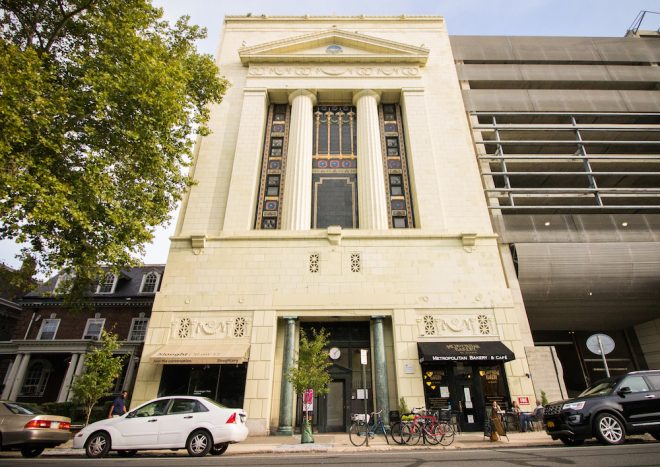 Contemporary storage buildings are about as bland and featureless as they come. They are structures that do not require windows, plumbing, or any interior design, so emphasis on the look of the exterior is rarely a priority. However, for the old Atlas Storage Warehouse Company facility at 4013 Walnut Street, long home to The Daily Pennsylvanian, student-run newspaper of the University of Pennsylvania, a swanky, embellished façade was everything.

Historically, the need for storage didn’t exactly align with the function that they mostly serve today, predominantly as domestic annex for people who have too much stuff. Rather, they were once used to protect the clothing, rugs, drapery, and furniture of wealthy people during the summer months when rich folks would go on extended holiday and could not protect their items from insects and other pests that would infest even the most elegant mansion in the days before air conditioning.

Atlas Storage Warehouse Company was an early leader in the storage industry. The company initially operated several small facilities around the city, but later consolidated into much bigger buildings. In 1925 Atlas commissioned architect George S. Kingsley to design an eight-story modern storage building on the 4000 block of Walnut Street. This and another facility at 3939 Germantown Avenue—still standing and still in use for storage—-would be the final consolidation the company would undertake.

Architect Kingsley was well known, from New York City to the Midwest, for his distinctively handsome storage buildings, the Egyptain Revival-style Reebie Storage Warehouse in Chicago being the most notable of his designs. While Kingsley was cooking up blueprints for 4015 Walnut Street he was also laying out plans for the Lee Brothers Storage Building in West Harlem in Manhattan, a building nearly twice the height of 4015 Walnut, but with the same façade. His Grand Rapids Storage & Van Company building in Michigan was named the Kingsley Building his honor. A third Kingsley-designed storage building in Philadelphia still stands at 235 East Church Lane in Germantown. 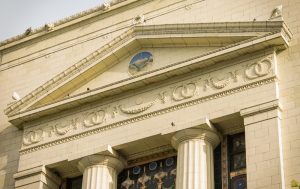 Lions, birds and a stately pediment gives this storage building the look of a large mausoleum. | Photo: Michael Bixler

The facility on Walnut Street was used for both storage and the offices of Atlas Storage Warehouse Company. The façade—a Greco-Roman inspired glazed terra cotta skin over a granite base and fitted with luminous, stain glass windows—was designed to attract the company’s target clientele. In its day, the details of the exterior were painted with bright colors, making the elegant building stand out even more than it already does. The front lobby was finished in Belgian black marble and furnished in walnut. Even the storage rooms themselves were clad in gypsum block and hollow terra cotta tiles. Items to be stored were taken through the back of the building on Sansom Street, carefully organized and packed in the basement, then stored on the upper floors.

A year after it opened the building was toured by 30 members of the local chapter of the National Association of Building Owners and Managers and heralded as an exemplar of an urban storage unit.

Atlas ran its entire operation from 4015 Walnut Street. Even the company’s extermination division, something of prime importance to storage companies, was headquartered here. Atlas Storage was the exclusive Philadelphia service agents of Konate, a moth-proofing spray that claimed to protect furniture and clothing from moths for up to three years. Extra income was made by two storefronts on the ground floor, long occupied by a drug store and a beauty parlor.

In 1961, the building came under the ownership of the First Pennsylvania Bank and Trust, undoubtedly drawn to the place due to its bank-like appearance. First Pennsylvania, one of the oldest and largest banks in the city at the time, moved there, leased a floor to a printing company, and opened a branch on the ground floor retail space after the leases of the former occupants expired.

In summer 1975 the University of Pennsylvania rented office space at 4015 Walnut from First Pennsylvania. They moved the offices of the The Daily Pennsylvanian, the school’s newspaper, and the Penn Credit Union out of the soon-to-be-demolished Sergeant Hall. Penn purchased the property in 1979 for $400,567 and has owned it ever since.

Today, the building is occupied by a Metropolitan Bakery retail outlet and the Slought Foundation art gallery on the first floor, The Daily Pennsylvania on the second, and the University Records Center on the third to eighth floors. In recent years there have been rumblings of Penn’s desire to more intensively utilize the building for commercial or residential purposes. There is definitely some expansion space available on the Sansom Street side of the building, and it would be interesting to see how an architect would remodel or expand the building for another use. The Atlas Storage building is not on the Philadelphia Register of Historic Places and is therefore not protected from demolition or major alteration.