Running Away With The Circus At 10th And Callowhill 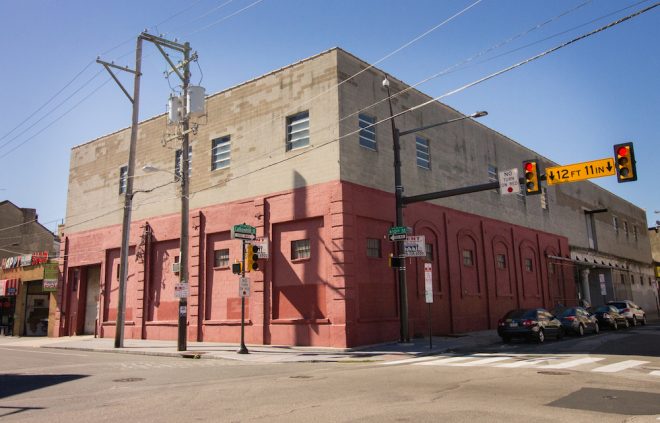 This quiet, dusty intersection at 10th and Callowhill Street once flowed with adoring crowds at the Philadelphia Circus and Menagerie. | Photo: Michael Bixler

These days the intersection of 10th and Callowhill Streets is about as entertaining as a coffin factory. Ridge Avenue cuts through the junction with a steady stream of frantic traffic, making street life and pedestrian access a deadening, dodgy affair. But this wasn’t always the case. The southwest corner once electrified the area with big top amusement and racy burlesque when tigers, elephants, and can-can dancers tripped the light fantastic at the Philadelphia Circus and Menagerie.

Philadelphia was once a hive of circus activity and is considered to be the birthplace of the American circus. John Bill Ricketts, an accomplished English equestrian, established the first circus in North America at the southwest corner of 12th and Market Streets. Ricketts Circus opened on April 3, 1793, featuring horse acts, juggling, rope-dancing, tumbling, and a clown. Crowds flocked to the show each night, making the circus such a success that performances had to be moved to a larger space at 6th and Chestnut Streets. President George Washington was a fan, likely due to his love of horses. The venue burned to the ground in 1799, sending John Ricketts back to England a broken and penniless man. He met a watery grave when the ship he was traveling on was lost in a storm. 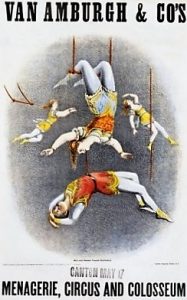 John Durang joined Ricketts Circus in 1795. Born in York, Pennsylvania, he became the first American-born professional dancer of note, bringing entertainment to towns and villages of Pennsylvania and Maryland. Durang was an actor, puppeteer, mime, singer, scene painter, tightrope walker. He was also the first professional clown born in the United States and George Washington’s favorite entertainer. Before he died in Philadelphia he penned his memoirs, the only extensive, first-person account of early circus life in the United States.

The great P. T. Barnum opened a museum in the city soon after buying the contents of Charles Willson Peale’s Philadelphia Museum. The venue, P. T. Barnum’s Museum of Living Wonders, opened in 1850 at the southeast corner of 7th and Chestnut Streets.

Barnum’s bitter rival was Adam Forepaugh, Sr., whose circus was internationally renowned in the post-Civil War era. Born into poverty in Philadelphia in 1831, Forepaugh became wealthy as a purveyor of horses and an importer of rare animals, eventually expanding into circus business. The Adam Forepaugh Circus traveled across the country and was one of the largest circuses in the world. Forepaugh’s show had the largest travelling hippodrome (horse racing track) in America between 1870 and 1892. He maintained winter quarters for his circus in Port Richmond at Mercer Street and Lehigh Avenue.

Forepaugh used the southwest corner of 10th and Callowhill Streets for his circus beginning around 1860. As a location for a impressive circus, the intersection was just outside of the city’s core, yet centrally located, and heavily traveled due to Ridge Avenue crossing the intersection diagonally. Ridge Avenue, originally called Ridge Road, is an ancient thoroughfare in Philadelphia, as it was initially a trail for Native Americans long before William Penn settled here. Patrons from out of town could easily attend the circus and not get lost along the way.

On November 27, 1865, Forepaugh opened the Philadelphia Circus and Menagerie inside his new performance space at 10th and Callowhill Streets. The building was the first permanent home of his touring show. Acrobatic performances, animal acts, and theatrical entertainment were featured.

Advertisements for VanAmburgh & Company brought crowds to performances three times a day at the Philadelphia Circus. Isaac VanAmburgh was a New York animal trainer who developed the first wild animal acts for modern entertainment. His acts offered a menagerie of monkeys, pumas, panthers, tigers, leopards, mules, ponies, and elephants. Advertisements further promoted VanAmburgh’s collection of rare birds and reptiles from around the world. 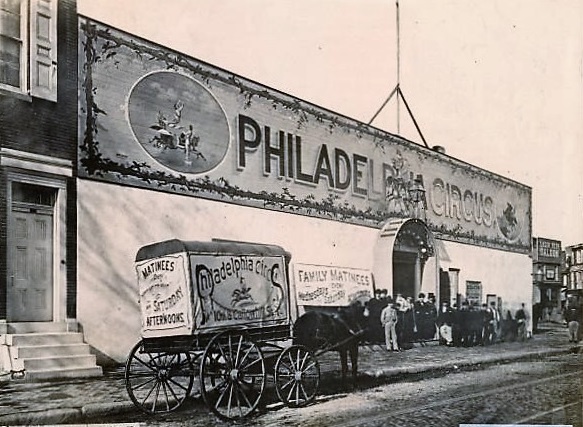 The original Philadelphia Circus building at 10th and Callowhill Streets in 1870. | Photo courtesy of the Free Library of Philadelphia

Mrs. Charles Warner’s Great Champion Circus made periodic stops at the Philadelphia Circus in the 1860s and early 1870s. Margaret Warner, a native of Pittsburgh, was an equestrienne who loved showing off her herd of horses and the tricks she and her troupe could do with them. Mrs. Warner’s Circus made rounds throughout Philadelphia, opening and closing at several sites in the 1860s and 1870s.

The Philadelphia Circus was also housed a burlesque venue, Gilmore’s Varieties, in the early 1870s. Police raided the building in 1875. Shows featured young women dancing the can-can, a scandalous French routine of high kicks, cartwheels, and splits considered reprehensible by the city’s moral authorities. Neighborhood residents also complained of boisterous men and boys exiting the building and leaving behind a trail of vulgar language and vandalism.

Just as the women were kicking their heels one afternoon, police squads entered through the doorways of the venue on both Callowhill and 10th Streets. Following the arrest of 25 dancers there was a stampede of inebriated audience members from the building. At the trial, W. J. Gilmore was charged with running a nuisance business, and the female performers were charged with participating in an improper performance. An excited crowd gathered outside of the courtroom to hear the verdict. The judgment, however, merely required all the accused to pay fines. 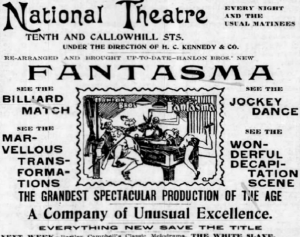 An 1890s advertisement for Fantasma at the New National Theater.

Soon after the incident the New National Theatre opened on April 15th, 1876 with seating capacity of 1,800 next to the original circus complex. This was a risky endeavor, as the playhouse was outside what was then considered Philadelphia’s theater district. Nevertheless, the New National Theatre was successful, putting on a variety of dancing showcases, musical programs, and theatrical melodramas.

The area was a stone’s throw from the core of Philadelphia’s tenderloin district, replete with cheap boardinghouses, blighted warehouses, seedy bars, and bad-luck booze hounds at the start of the 20th century. Men looking for work often took day-labor jobs or worked as longshoremen and stevedores on the Delaware River docks, although such waterfront activity was beginning to decline. Others spent their days drunk and listless in flophouses, gambling dens, and brothels.

The decline of the neighborhood put the National Theatre out of business. When the building was sold in 1917, newspaper articles lamented the loss of the theater, recalling memorable performances of some of the warmest melodramas the city had ever seen. The entertainment venue was used thereafter as an icehouse for the American Ice Company, although World War I prevented any changes to the structure until 1919. When the conversion was complete the plant could produce 250 tons of ice a day and included a large warehouse to hold surplus ice made in the winter.

The American Ice Company retained its facility at 10th and Callowhill until the 1960s. A three-alarm fire damaged the vacant factory in 1976. Sections of a wall fell onto cars on 10th Street and a rooftop water tank collapsed. No one was injured.

The building, remodeled beyond recognition from its original appearance as a grand entertainment venue, was most recently used as a food distribution warehouse for MJM Trading, Inc. It now sits vacant and for rent.