Reconnecting Horticultural History On The Schuylkill 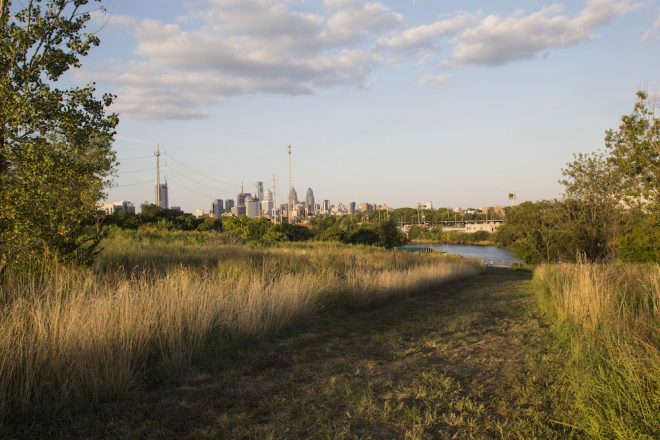 The Schuylkill River Trail has done a remarkable job of bringing life and leisure back to the long-abandoned “hidden river.” The steady transformation of this post-industrial stretch of largely deserted wetlands has garnered citywide support for future projects and continues to receive considerable national recognition for a job well done. Once complete, the much anticipated Grays Ferry Crescent Trail extension, by way of the old Conrail swing bridge, will connect pedestrians, runners, and cyclists to West Philadelphia like never before.

The Schuylkill River was once one of the most revered scenic landscapes in the country. Elite families established a number of sprawling 18th and 19th century estates west of Center City, with mansions positioned prominently along the banks of the Schuylkill. Two remaining riverside estates, Bartram’s Gardens and The Woodlands–both National Historic Landmarks–will soon be accessible from the east and west along the Schuylkill River Trail. The physical reconnection of these now distinctly different sites brings to light their historical ties to early American horticultural practice, a regional theme in West Philadelphia that spans generations.

Bartram’s Garden, considered the oldest living botanic garden in North America, was the home and estate of John Bartram (1699-1777), a Quaker farmer who would become a world famous plant collector and horticulturist. Bartram is best known for exploring and collecting plants throughout the southern Colonies and shipping “Bartram Boxes” of seeds and plants abroad. In total, Bartram brought approximately 200 species to Europe from the Americas.

John Bartram’s legacy is arguably more widely known in England. He introduced a number of American species to the British, including the Sugar Maple and Franklin Tree (named for friend Benjamin Franklin), both producing brilliant fall foliage and a novelty in England at the time. Bartram was renowned in the 18th century circuit of natural scientists. The Swedish botanist and zoologist, Carl Linnaeus, father of Linean Taxonomy, the the modern system of naming organisms, once called John Bartram “the greatest natural botanist in the world.” 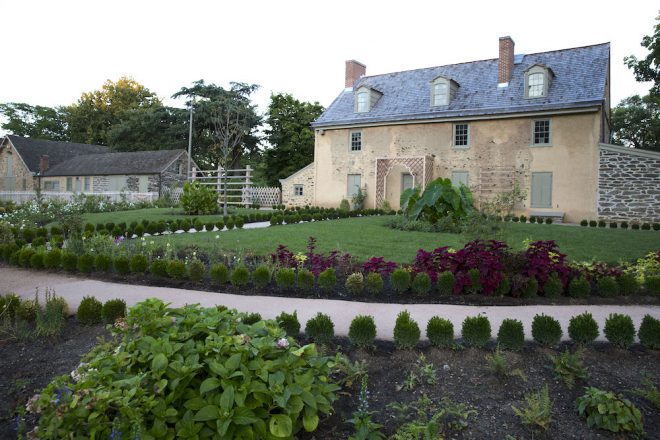 The newly restored and highly manicured Ann Bartram Carr garden on the north side of the Bartram house illustrates the site’s 19th century history with exotic plants in symmetrical arrangements. | Photo: Starr Herr-Cardillo

After purchasing 102 acres along the banks of the Schuylkill River in 1728, including a small cottage originally built by Swedish farmers in the 1690s, John Bartram began his life-long project of expanding and redesigning his home. The house evolved over the years, with Bartram reconfiguring it and adding distinctive, carved stone decorative elements unlike anything seen in Philadelphia at the time. Bartram’s house now sits at the center of a 45-acre public park, jointly managed by Philadelphia Parks and Recreation and the John Bartram Association. Bartram’s Garden provides community garden and farm space to surrounding neighbors and hosts a wide range of public events and programming.

Just up the river, William Hamilton (grandson of prominent Philadelphia lawyer Andrew Hamilton, whose defense of John Peter Zenger established freedom of the press) inherited the land for his estate, The Woodlands, from his father in 1747 when he was just two years old. Over the course of his adult life, Hamilton parceled together roughly 500 acres along the west bank of the Schuylkill River, including much of what is now the campuses of Penn and Drexel.

An extended visit to England in the mid-1780s inspired the neoclassical remodel of Hamilton’s Philadelphia estate, recognized as the earliest example of Federal architecture in the United States, and had an equally powerful impact on his approach to landscape design. A number of written accounts praise Hamilton for his implementation of English landscape principles to his property, most notably by Thomas Jefferson who called The Woodlands, “the only rival which I have known in America to what may be seen in England.”

Hamilton was an avid amateur botanist and plant collector. He introduced a number of exotic species to the U.S. through his greenhouse and gardens at The Woodlands. Included in his repertoire were plants that we now regard as common, like the red rose and blue hydrangea, rarities at the time that could only be viewed by visiting his estate. Hamilton was known as a bit of a plant hoarder. His impressive greenhouse no longer stands, but historic maps and accounts corroborated by archaeologists confirm that it sat west of the mansion between the house and the stable. A number of written accounts describe the impressive display, which at one point contained roughly 900 exotic species. Hamilton was so well regarded in early botanist circles that he was one of two recipients of a selection of seeds and plants collected on the Lewis and Clark expedition. 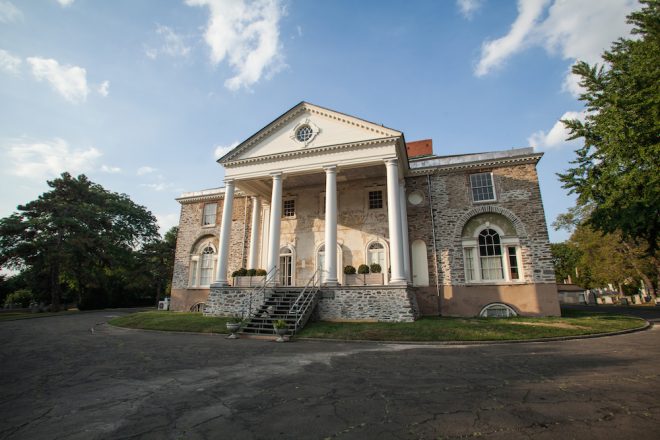 Visitor’s during the Hamilton era approaching from the river would have seen the distinctive two-story neoclassical portico facing the Schuylkill. | Photo: Starr Herr-Cardillo

Hamilton was a contemporary of William Bartram, the son of John Bartram who followed his father’s love of plants and continued the family’s botanical legacy. William Bartram was a skilled artist who made a name for himself with beautifully precise botanical drawings, eventually publishing the first comprehensive catalogue of American plants in 1783. The two frequently exchanged letters, plants, and seeds. Wealthy visitors to Philadelphia routinely toured both estates during their visit. At the time, Gray’s Ferry was home to impressive public gardens, called Gray’s Gardens, which was often included on these visits as it sat right between the two estates.

The University of Pennsylvania also made use of these nearby resources. Dr. Benjamin Smith Barton, chair of Materia Medica and the university’s only professor of botany, called upon William Hamilton to allow the use of his plant collection and gardens to supplement Barton’s lectures. The gardens at The Woodlands were the first to be associated with the study of botany at the University of Pennsylvania, a relationship that would strengthen over the next century.

The Seeds Of Change

After William Hamilton’s death in 1813 his heirs had difficulties managing the large estate. As industrialization of the immediate surrounds made their land more valuable, the family eventually began selling off parcels to avoid foreclosure. In 1831, the mansion and 90 acres surrounding it were purchased by developer Thomas Mitchell, who reshaped the central portion of the property into a rural cemetery.

The new owners, Woodlands Cemetery Company, were sensitive to Hamilton’s carefully crafted landscape design while reconfiguring the property into a burial ground, even reusing the mansion as their central office and funeral chapel. Eli K. Price, founding member and treasurer of the company beginning in 1840, was particularly devoted to the conservation and upkeep of the landscape, preserving Hamilton’s living botanical work and ensuring that those with family lots planted them with appropriate species. The Woodlands is still an active cemetery, though it also serves as a beloved neighborhood park and outdoor community space. The Victorian practice of gardening within cemetery lots and the reuse of existing “cradle graves” is being thoughtfully reintroduced at the historic site.

Price continued to foster the relationship between The Woodlands and the School of Botany at Penn. After being elected a Trustee of the University he provided input on the selection of land for the new western campus expansion which ran right up against Hamilton’s former estate. Price, one of the original commissioners of Fairmount Park, developed a strong interest in natural science over the years and provided Penn with the use of an outdoor auditorium at the edge of The Woodlands property, known as “The Ravine,” as a space for outdoor lectures until the school established its own botanic garden, Kaskey Park, in 1897. 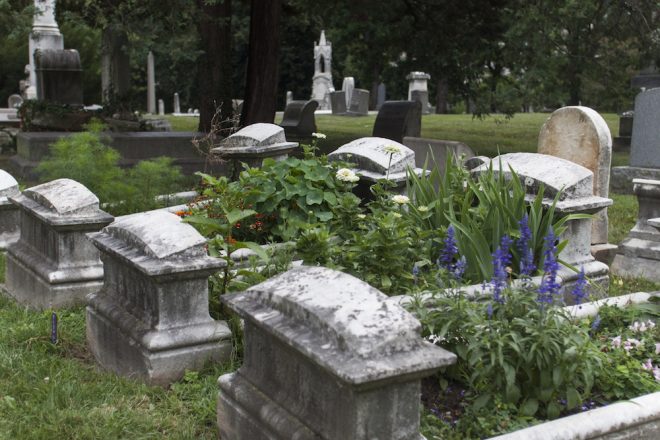 Interest in botany carried through the next generation of Bartram’s family as well. William began the first commercial nursery in the country out of the family home, and the enterprise was continued by John Bartram’s granddaughter and son-in-law, Ann and Robert Carr, well into the 19th century. The pair were successful entrepreneurs able to sustain a profitable business using the family gardens and numerous greenhouses to propagate over 4,000 species of native and exotic plants on their property. Bartram’s Garden continued to function as a commercial nursery up until 1850 when financial troubles prompted the sale of the family’s land to Andrew M. Eastwick, who maintained the gardens and the grounds as a part of his new estate.

When Eastwick passed away in 1879, a campaign was organized to turn the property over to the City of Philadelphia to be preserved as a public park. The Bartram house and a number of outbuildings, including the only remaining John Bartram-era green house, remains standing today. Horticulturalists believe the gingko tree near the entrance of the gardens, a gift from William Hamilton to William Bartram send from England in 1785, is the oldest in North America.

The Woodlands and Bartram’s Garden are open to the public every day from dawn until dusk. They are operated by nonprofit organizations committed to preserving and interpreting the sites’ respective legacies through education and public programming. Both continue to evolve to meet the 21st century challenges faced by nontraditional historic sites. The western expansion of the Schuylkill River Trail will aid in driving attendance and increasing public awareness of these national botanical landmarks.

Disclosure: Starr Herr-Cardillo is currently an intern at The Woodlands.