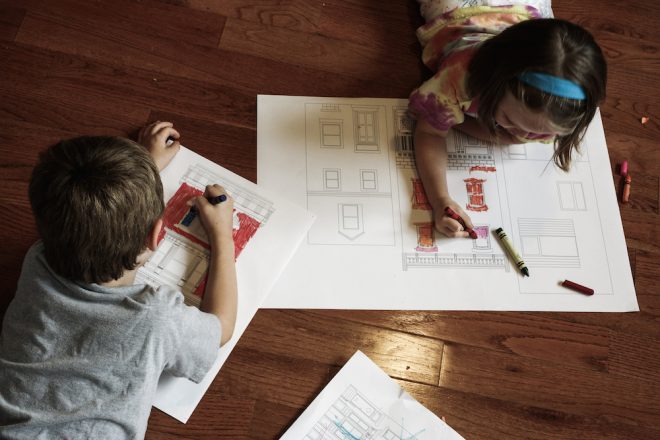 No white picket fences allowed. With the Fishtown Coloring Book, co-founders of PhillyRow hope to instill a sense of pride and connection in children with an accurate representation of where they live. | Courtesy of PhillyRow

For a genuine appreciation of what gives Philadelphia its unique character, take a break from the Center City skyline and avert your gaze down to the colorful, eclectic network of row houses that stretches out in every direction. These nuanced, tightly-packed blocks are the subject of PhillyRow, a new research project that combines art, education, and enrichment through interpretive graphic design and coloring books. The project, founded by a trio of Temple University professors at Tyler School of Art, will officially launch with an exhibition opening this Friday at Minnow Lane children’s store in Fishtown, part of the DesignPhiladelphia 2016 Festival.

The exhibition will include a mural by illustrator Miriam Singer and a row house coloring installation featuring poster designs and infographics exploring the anatomy and history of the Philadelphia row house. “We want people to be excited about where we live,” says Bryan Satalino, assistant professor of graphic design at Tyler School of Art.

Parents are also invited to sign their children up for a row house drawing class Saturday morning or join in the fun themselves later that afternoon at an all-ages PhillyRow coloring activity. 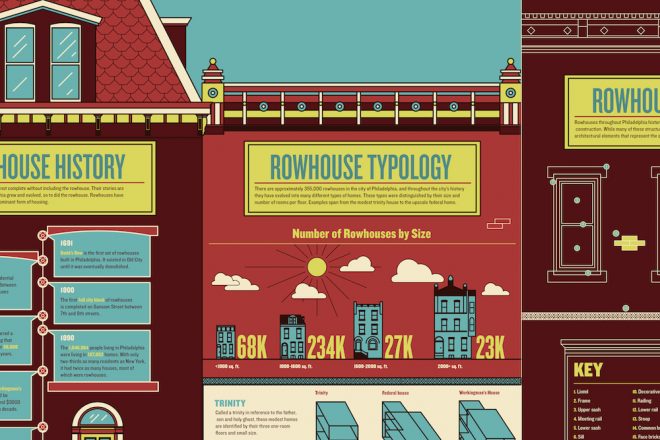 Preview of an exhibition infographic about the history of Fishtown row houses. | Courtesy of PhillyRow

According to data from the Healthy Rowhouse Project, 70 percent of all housing units in Philadelphia are row houses, so it doesn’t come as a surprise that each of the PhillyRow team members live in one. Satalino says the idea to do a poster series first came to him about three years ago when he started thinking about how strikingly different the designs for row houses were in West Philadelphia, where his wife works, compared to those in Fishtown where they live with their child. He met Clifton Fordham, professor of architecture at Tyler the same year, but it wasn’t until they connected with fellow design professor Abby Guido that the PhillyRow project truly began to take shape.

“We had all these beautiful drawings and wanted to figure out what to do with them,” Guido says of the row house surveys that they worked on during their summers off from teaching. As Guido, Satalino, and Fordham continued their research, the natural next step was to put together an interpretive, public exhibition.

With the installation in Fishtown, one of many areas in the city undergoing a rapid population growth and surging real estate development, both longtime residents and new transplants can learn more about the history, design, and function of the neighborhood’s signature housing model. The coloring book is a crafty way to get children and adults actively engaged in connecting both intellectually and emotionally with the buildings they call home. 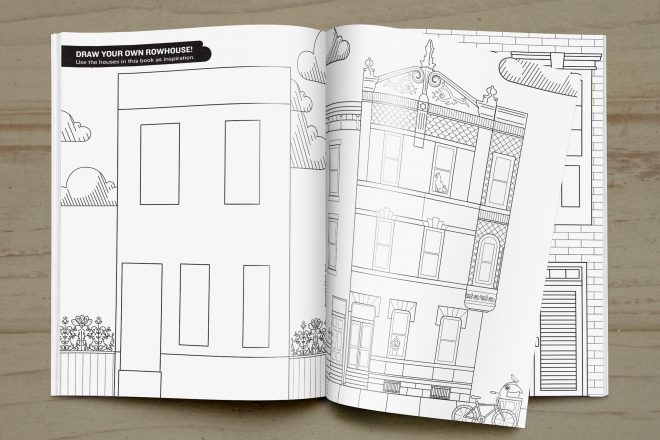 The coloring book is also a visual education on row house typology and architectural features native to Philadelphia. | Courtesy of PhillyRow

“There’s a need for this civic pride to be instilled amongst young people,” says Satalino. “Every time you see a young kid draw a house, it’s never a row house. It’s always the fabled chimney, dog out front, two-point-five acres of land. Those are paradigms we’d like to change. We want kids in our neighborhood to grow up drawing row houses.”

Considering the row house as an historic strategy to deal with population density in urban areas, Fordham sees these buildings as still remarkably effective in creating healthy communities through a neighborhood of homes rather than the isolation from street activity and relative anonymity of high-rise condominium living.

“[Row houses] help it feel like a neighborhood. You own your front door,” Satalino.

Following the debut of their project this weekend, the PhillyRow team will continue their investigation through architectural surveys and social research. The group plans to present their findings in the future through artwork and other publications in order to forge a deeper relationship between residents and these ubiquitous pieces of everyday architecture.

PhillyRow will launch with a reception at 5:30PM on Friday, October 7 at Minnow Lane, 2029 Frankford Avenue. Row house coloring books will be available for purchase.