Editor’s Note: In this second installment of our three-part series commemorating the life and work of architect Minerva Parker Nichols we examine her residential architecture portfolio, the trajectory of her career, and the design of her most notable house, Mill-Rae. Although Nichols’ formal career in Philadelphia lasted just a decade (she continued to practice informally in subsequent decades), she was responsible for over 60 commissions throughout her lifetime. Nichols was also known for her practical experience and her supervision of the construction process. A builder working on the New Century Club in Wilmington once declared that he had “never worked for an architect who better understood the business,” while another project’s building contractor went further. “She knows not only her business, but mine too,” he said.

Nichols’ portfolio was dominated by women’s clubs and residential commissions, including several for female clients. Among her earliest and most famous was the house design for women’s rights activist Rachel Foster Avery, in Northeast Philadelphia. The Cranaleith home, originally known as Mill-Rae, was recently nominated to the National Register of Historic Places.

From the start of Nichols career, newspaper articles and trade publications noted her stated specialization in domestic architecture—her “particular forte,” as the Chicago Tribune described it. Although this descriptor did carry the weight of the late 19th century’s gendered assumptions, in which women were understood to have inherent design and domestic taste, it is also a reminder of the natural continuation between her work under architect Edwin W. Thorne and her commissions as an independent architect. Before she even announced her practice in 1890, Nichols had already “satisfactorily designed and executed a number of residences and dwellings,” according to the California Architect and Building News. Indeed, her success in Thorne’s office apparently generated enough client leads that she went into business for herself far earlier than anticipated. One local trade publication, the Philadelphia Real Estate Record and Builders’ Guide, explained that “it was neither Miss Parker’s wish nor intention to assume the title of architect for some time to come, but a rapidly increasing number of clients made it a necessity.” Within the first two years of her firm’s existence, the Philadelphia Real Estate Record and Builders’ Guide published 11 notices of Minerva Parker Nichols’s projects nearly all of which were residential commissions concentrated on the suburban and upper-class Main Line suburbs of Philadelphia.

A collection of project drawings by Minerva Parker Nichols.

For these residential commissions, Nichols was known for designs that employed a range of architectural styles, in keeping with the 19th century belief that the design of a house should reflect the individuality of the owner. Minerva wrote as much herself in one of her many published articles, advocating the design ideals of contemporaries like A. J. Downing, believing that the exterior of the house should resonate with the client (male or female) as much as the interior. In an 1893 editorial that she penned for the front page of Housekeeper’s Weekly, she wrote that “The chief charm of any house is its individuality. There are many things which houses or people possess in common; but the thing which charms us is the thing peculiar to a certain house or a certain person.” Her projects accordingly exhibited the full spectrum of styles that were characteristic of late 19th century architecture in Philadelphia, including Colonial Revival for the Misses M. and J. Campbell, Shingle Style for Millwood Justice and Rachel Foster Avery, and Eclectic (or “American Hodge Podge,” as she deemed it) for Wallace Munn’s home in Oak Lane.

Nichols’ commission for Rachel Foster Avery was among her earliest advertised commissions as an independent architect. She was profiled in trade publications in 1889, and by the end of 1890, she had announced that a project for Mrs. Rachel Foster Avery, in the Somerton section of Northeast Philadelphia, was “on the boards.” The design was distinct among Nichols’ residential commissions, fulfilling both a private and public function for nationally-known suffragist Avery and her family. The house was designed with several bedrooms, large parlors, and sitting rooms, with the intention of hosting meetings for various women’s associations In the late 19th century such accommodations and gathering spaces for women’s organizations were rare. (Nichols’ clubhouse design for the New Century Club of Philadelphia was not completed until 1891.) Mill-Rae was therefore intentionally designed to accommodate not only Rachel Foster Avery, her husband, and children, but also fellow suffragists traveling to Philadelphia for meetings and conventions, including Avery’s close friend and mentor, Susan B. Anthony. The commission included a house and stable, and, within a year, newspapers praised her design for the spacious building. 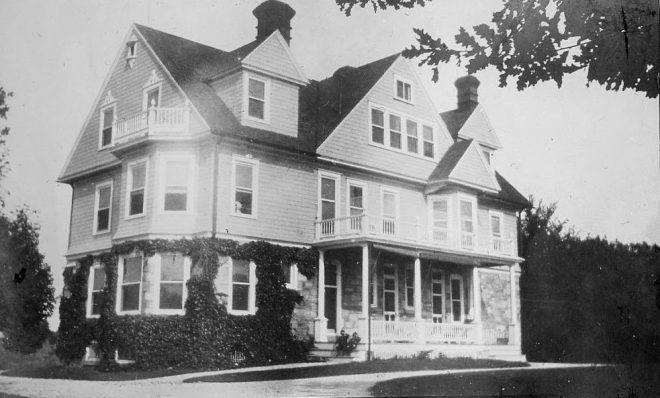 As was typical of Nichols’ work, the design for Mill-Rae was sophisticated in its integration of function—both intimate living and large gatherings—and artistic form. Mill-Rae was unusually large in plan, befitting its intended uses. Its sizable first floor encompassed not one but three rooms that were well-suited and well-connected for meetings or gatherings of large groups. The second and third floors include a combined ten rooms—far more than necessary for Avery’s own family. The kindergarten referenced above was likely hosted in the first floor and the basement, which is fully excavated and spans the full footprint of the building.

With so many rooms on the interior, and an emphasis on the peripheral porches as decorative features, the house necessitated various design innovations to incorporate daylight into the home’s gathering rooms. Thus, the windows on each of the four elevations and in the main stairwell were particularly large, curving along the exterior of the building where necessary to increase the available light in the central reception hall. In addition, Nichols inserted a tall, narrow opening into the chimney over the fireplace in the main sitting room. This unusual feature increased the amount of light that could penetrate the room where most meetings and gatherings likely occurred. The end result thus fulfilled Nichols’ architectural emphasis on natural light and circulation, a philosophy she wrote about often, including in an article published the same year that Mill-Rae was completed in which she noted, “Don’t be afraid of light and air, they are the things that do most to beautify our homes.”

Mill-Rae was a pivotal commission for Nichols for reasons that extended beyond this single commission. Its use as a gathering space for women—and possible future clients—was critical to Nichols as she built her roster of clients. At this time in the late 19th century, women architects enjoyed limited (at best) access to professional societies due to their gender. Given this constraint, Nichols had less access than her male counterparts to traditional networks of associations—including well-established social clubs or professional associations—for commissions. In order to earn clients, therefore, Nichols needed to curry favor and commissions on a personal, rather than corporate, basis. In the early 20th century, the educator Henry Frost assessed the general situation for female designers: “[Women’s] professional work, both in architecture and landscape architecture, is likely, though this is by no means always true, to be in domestic fields. The sentimental reasons for this can be ignored. The true reason is that women practitioners thus far are more likely to be commissioned by individuals than by corporations and organizations.”

Thus, since projects for individuals were much more likely to be private residences, female architects’ work was more likely to involve domestic, rather than institutional, designs. Nevertheless, commissions such as Mill-Rae—designed to host large groups of women—introduced Nichols to subsequent clients and generated a clear progression of commissions for her career. Avery and Parker were both members of the New Century Club of Philadelphia, which hired Nichols to design its clubhouse in 1891. Also on the club’s roster was Emily Sartain, president of the Philadelphia School of Design for Women, who hired Nichols to lecture in architectural ornament beginning in 1891. The New Century Club project led to a commission for the New Century Club of Wilmington in 1893, and so forth. The highest-profile design of Nichols’ career—the Queen Isabella Pavilion for the World’s Columbian Exposition in Chicago (never built)—coincided with Rachel Foster Avery’s work with the World’s Congress of Representative Women. Both women advocated for dress reform and other women’s causes at the fair, and both women could count Mill-Rae as an early gathering place for their social connections, professional activities, and lifelong work towards gender equality.