Kenney Signals A Potential Breakthrough On Jewelers Row (Updated 10:45AM)

Responding to “the frustration of the Philadelphians who have called out in recent weeks for historical protection of Jewelers Row” in a statement issued this morning Mayor Jim Kenney has indicated he is negotiating with officials from Toll Brothers to preserve the second and third story facades of 702-710 Sansom Street as part of their proposal to build an apartment tower on the historic street.

The Mayor’s statement comes as 704 and 706 Sansom Street, two of the buildings Toll has proposed to demolish, come before the City’s Historical Commission for historic designation. If designation is granted, these buildings would be protected from demolition. However, the Mayor’s statement indicated that he believes that Toll has a legal right to demolish them, “in accordance with City Code.”

“I asked them to go above and beyond what the law requires in preserving the historic nature of these properties,” he said. “They have given me and Councilman Squilla their word that they are committed to maintaining Jewelers Row as a historic, cultural gem for future generations of Philadelphians to enjoy.” 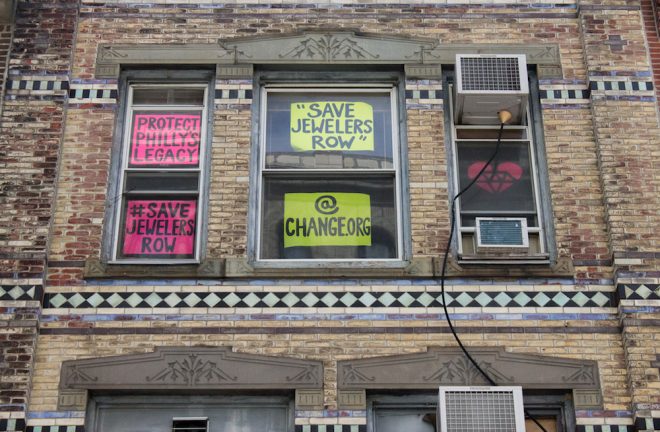 “It’s great to see the Mayor speaking out on this issue and taking a leadership role in preservation. We welcome that,” said Preservation Alliance for Greater Philadelphia executive director Paul Steinke this morning. “The ball is in the developer’s court. We wait for them to come forward with specific plans to show the public how they might include the existing buildings into the development.” The Preservation Alliance has led the opposition to the proposed demolition of 702-710 Sansom Street and sponsored the nominations of 704 and 706 Sansom to the Historic Register.

Toll officials told the New York Times “it will build the tower 15 feet back from the existing line of buildings along the brick-paved street and put a loading dock and trash facilities on an adjoining block to help preserve the neighborhood’s character.”

Noting the historic, cultural, and architectural value of the existing Jewelers Row buildings, Steinke told Hidden City that his organization intends to continue to pursue historic designation of 704 and 706 Sansom Street. “The Historical Commission would be the appropriate venue for this developer’s plans in order to ensure there is meaningful and significant preservation as part of the development process.”

The Mayor also indicated that he has asked Toll Brothers to follow recommendations issued on the project by the City’s Civic Design Review Board.

Steinke says he applauds the involvement of “qualified professionals” at the Historical Commission and Civic Design Review Board to “help shape the project” so that it “truly does, as the developer claims, respect the history and culture of Jewelers Row.”

In the coming days the Mayors Office will issue legislation to “increase resources” for historic preservation in Philadelphia, the Mayor’s statement said.